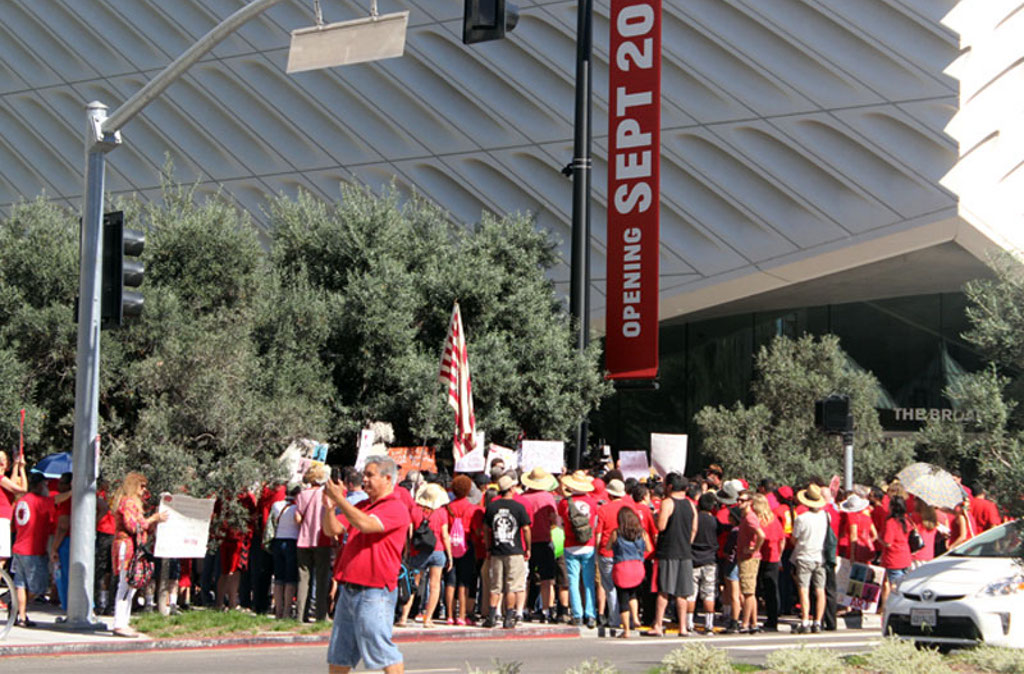 With almost half a million students, California had the largest charter school enrollment in the country. And no city in the US has more publicly funded, but independently operated schools than Los Angeles.

Plans to ramp up the expansion of charter schools to the city brought a group of charter school opponents Sunday to an unusual setting—the opening of The Broad museum. FSRN’s Lena Nozizwe reports that the demonstrators have nothing against the art.

Artwork by the likes of Jean-Michel Basquiat, Cindy Sherman and Jeff Koons is on the inside of the $140 million contemporary art museum.

And on the outside, a crowd of about 100 teachers and parents dressed in red, protested the opening day of The Broad in downtown LA. The protest signs were as artistic as the setting, with one depicting the museum’s creator, Eli Broad, in the style of Andy Warhol along with the words “POPS — Privatizing Our Public Schools.”

“We are calling on all elected officials to oppose Broad’s plan and stand for the schools LA students deserve,” one protester told the crowd.

The demonstration was organized by Union Teachers Los Angeles. UTLA president Alex Caputo Pearl says the teacher’s union has nothing against the free museum. But it does take issue with billionaire Broad’s financial support of a plan to draw half of the district’s students out of LA’s public schools and into charter schools. The UTLA primarily represents public school teachers; teachers at charter schools are generally not unionized.

In a statement, the California Charter Schools Association said the protest was nothing more than a public relations stunt, and noted that some 40,000 parents are on waiting lists to get their children into LA’s charter schools.

An LA school district employee, who did not want to be identified, says there are certainly benefits of the private schools run on the public dime.

“I think charter schools are good because they teach students multiple languages,” the employee says.

“We don’t get to choose our student population. We don’t get say no to English language learners. We don’t get to say no to special education students. We take all students from all levels of income and from all backgrounds. So even though charter schools have managed to take our ‘quote unquote’ best students, we are doing equally as well,” Martinez explains.

While research on the comparative success of public versus charter schools has produced mixed results, billionaire supporters, including Bill Gates, have poured money into the latter.

Given that arts programs are often those first cut come budget time, the protest at the Broad museum highlighted the unequal footing between standard public schools and state-funded charters.