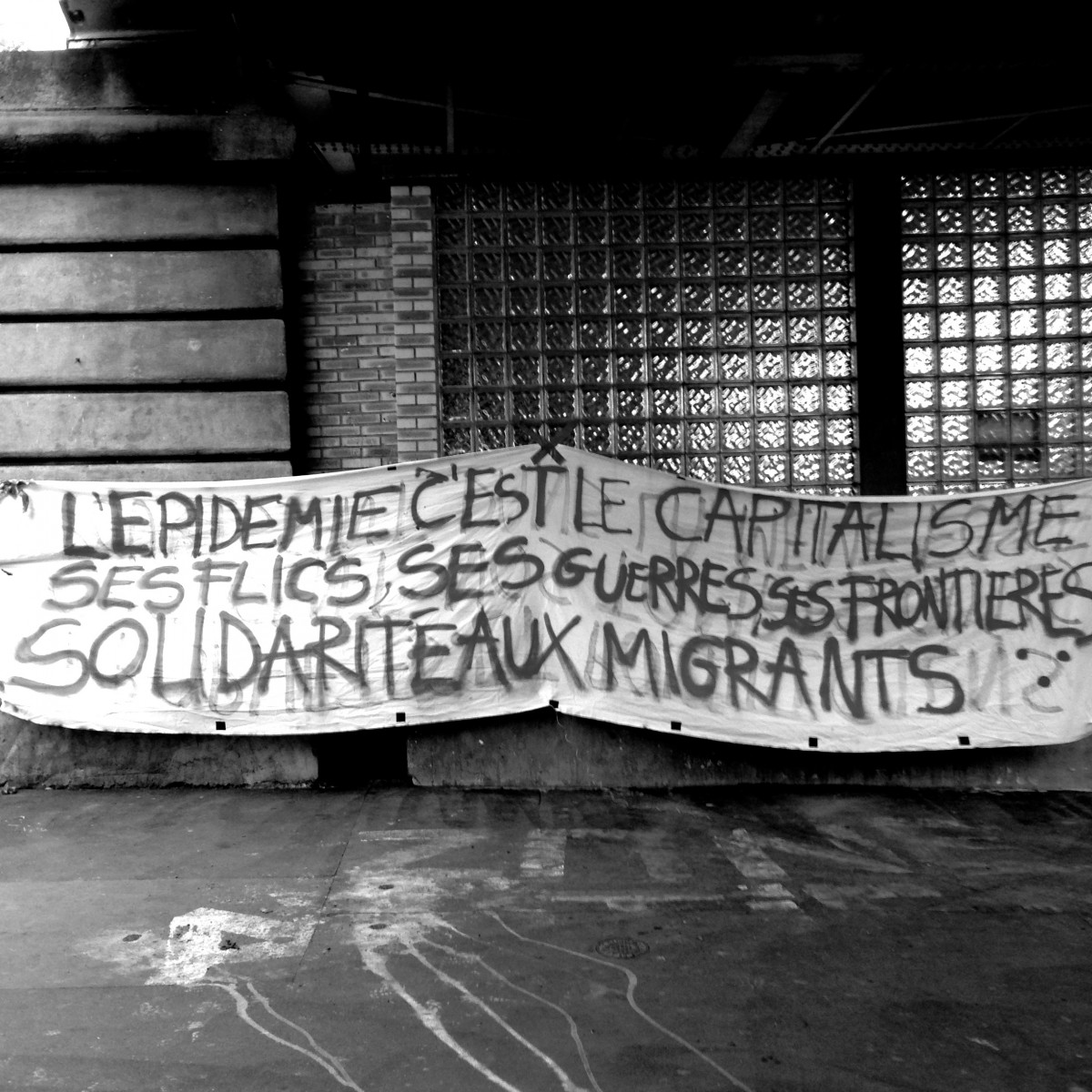 “Capitalism is the epidemic along with its cops, its wars, its borders. Solidarity with migrants” says the banner under Paris metro near Koubri camp. The possibility of an epidemic was the reason authorities cited for dismantling the makeshift camp. (Photo Credit: Raphaël Krafft)

French police demolished a number of ad hoc migrant refugee camps in the country Tuesday, one in the northern port town of Calais and the other in central Paris. Last week FSRN’s Raphaël Krafft visited the camp and talked with a number of residents there. After issuing a 48-hour warning that the camp known as Koubri, or the Bridge, would be soon dismantled — police descended in the early morning. French authorities cited the of epidemic as the reason for evicting the residents and destroying the camp. A Paris police spokesperson said they took all of the 380 migrants by bus to shelters in and around Paris. But as Raphaël Krafft reports, many of them remain in the streets and the fate of still others remains unknown.

A dozen activists chant “Solidarity with migrants” as a bus filled with refugees makes it way around the security perimeter at the Koubri campground. With nowhere else to go, hundreds of mostly African migrants had set up a camp under a bridge in central Paris, where they’d been languishing for eight months.

About 6 a.m. Tuesday morning, several dozen police officers and city staff started evacuating the camp, providing bus transportation for those willing to relocate. Then, they bulldozed the campground.

Mohammed, a 23-year-old from Chad, lost everything: “My clothes, everything is inside. I said I want to take my clothes they said ‘no, it’s finished.’ They said ‘go away.'”

FSRN’s Raphaël Krafft asks Mohammed about his documents: “You said you had your papers everything over there?”

“Yes, everything inside,” Mohammed replies, indicating that he has nothing left.

Last Saturday, officials warned the residents the camp would be dismantled within 48 hours, but they didn’t know exactly when. This morning many had left the camp to find food or have a shower. When they returned, they weren’t allowed back in to collect their tents and belongings left inside.

All media was denied access to the immediate vicinity. Politicians too. Pascal Julien, a Paris City Council member from the Green party, said that only after two hours of negotiations were Council members even allowed inside.

“But the worst is that journalists were denied access, even print and radio journalists who can’t film the migrants’ faces,” Julien told FSRN. “There is absolutely no excuse for that, except that the police commissioner does not want them to report what they would see.”

About fifty people who, like Mohammed, had been away when the camp was evacuated and buses boarded waited all day behind barricades while heavy machinery cleared the camp. They were denied any official assistance.

Paris police commissioner Bernard Boucault and Deputy Mayor Dominique Versini told the media those people taken by bus from Koubri campground would be relocated to alternative housing in Paris and its suburbs. But according to the Green Party’s Pascal Julien, even these emergency accommodations are precarious.

“In a few days or weeks three-quarters of them will back in the streets,” Julien predicts. “Because the housing they were given will only be temporarily available.”

Officials did not say specifically where they were taking the Koubri residents. Another makeshift camp near Austerlitz train Station in central Paris where around 150 refugees are living is set to be dismantled in the next few days.