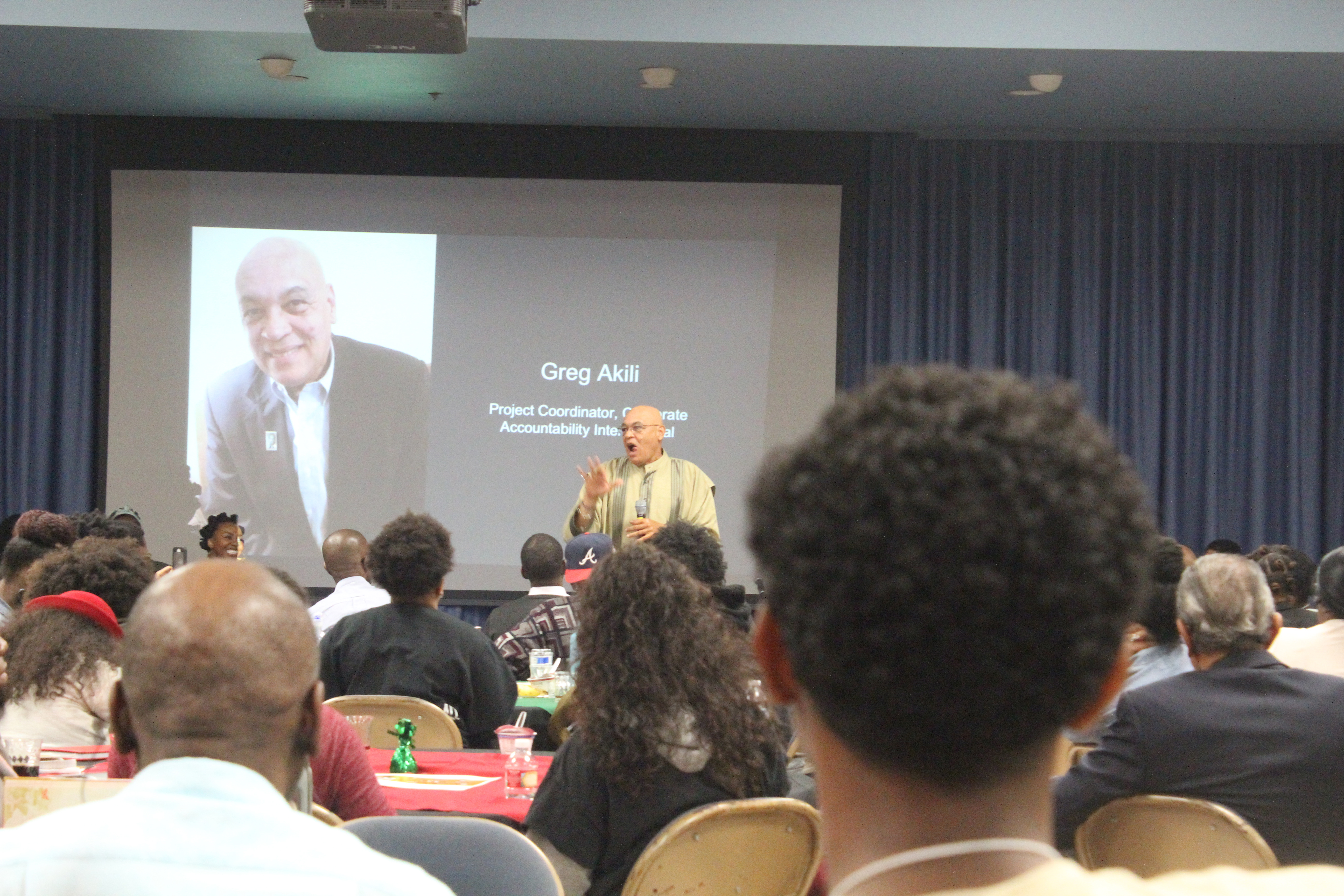 The issues facing undocumented black immigrants was among among the topics discussed earlier this month during the Black Immigration Network Kinship Assembly in Los Angeles. (Photo credit: Lena Nozizwe)

The U.S. Supreme Court appeared to be evenly divided during oral arguments Monday in Texas v. the United States, the highly anticipated challenge to President Barack Obama’s executive actions on immigration.  The case was brought by a coalition of 26 states challenging two immigration programs designed to protect qualifying members of mixed status families from deportation. The first would expand Deferred Action for Childhood Arrivals, or DACA, while the second would extend DACA-like status to undocumented parents meeting certain criteria. The latter program is called Deferred Action for Parental Accountability, or DAPA.

Immigration reform advocates hope that Chief Justice John Roberts will side with his liberal counterparts and find that Texas doesn’t have standing to challenge the actions. That would shore up a majority to overturn a lower court ruling to halt the actions. But that didn’t seem to be the case during Monday’s proceedings, when Roberts appeared sympathetic to the challengers. Should he side with conservatives on the still eight-justice panel, the bench will tie and the lower court’s ruling blocking the executive actions will stand.

FSRN’s Lena Nozizwe reports that the court’s decision will affect millions of undocumented immigrants in the United States, including a population rarely considered.

“There is not one particular experience I could pinpoint to be the worst experience. I think the overall experience is magnificently hard,” says Gabrielle Jackson.

For more than 20 years, she was a member of what she describes as an invisible, lonely and mostly secret society; the population of between 400,000 and 600,000 undocumented immigrants of African, Afro-Latino and West Indian descent living in the United States. She was only nine when she arrived in America from Trinidad.

“I had this loneliness, complete isolation and feeling like I was alone because of the fact I didn’t feel like there was anybody else in my situation,” recalls Jackson. “Because when it looked like immigration, it totally focused on being Latino. Not being Afro-Latino, not being within the diaspora, specifically most times having to do with Mexico.”

Latinos do make up an estimated 59 percent of undocumented immigrants, although immigration attorney Sharron Williams contends Asians may make up a larger percentage than most estimates indicate.

Williams, who practices in Northern California, says in some cases and some places, stereotyping allows black undocumented immigrants to come under less scrutiny.

“In the Bay Area, there is not a sense that people of African descent are immigrants. There is not a sense of that. That has pluses and minuses, because one of the things that is a plus, is that when undocumented black people in the Bay Area interact with the criminal justice system their immigration status is not typically questioned because they are assumed to be African-American. So in a sense to me that’s a good thing, until the system catches up with them. So there is side of me that wants to keep that silent because we don’t see, in the Bay Area we do not see a lot of people of African descent in detention centers or in court, in detained court,” Williams explains. “So you will see them in the regular immigration courts, but not typically detained. And so that is quite unusual. Now you switch that to someplace like Los Angeles, San Diego, New York City or Washington D.C., those places where there is a culture of black immigration, that’s one of first things they will check.”

The advocacy group Black Alliance for Just Immigration says nationally, undocumented black immigrants are detained and deported at five times the rate of others with similar status. Complicating the issue is that black undocumented immigrants hail from far flung locations, including sub-Saharan Africa, the Caribbean and Latin America.

Immigrants from around the world came together in Los Angeles earlier this month at the Black Immigration Network Kinship Assembly to share their stories.

That includes Rhea, a mother of four who was born in Belize and is Garifuna.

She gets emotional when she talks about the toll of living without immigration papers for almost 30 years.

“Saying to myself, ‘Oh my gosh, I have no means of being able to be employed. Rent is due, this is due, that is due, and I am of no use to myself or to my children. Let me kill myself.’” Rhea recalls. “That’s one of my breaking points that I had.”

But she survived her suicidal days and obtained legal status two years ago.

Gabrielle Jackson of Trinidad also experienced the anxiety of living in the shadows of U.S. immigration policy until she qualified for Deferred Action for Childhood Arrivals, or DACA, an executive order signed by President Barack Obama that gives temporary legal status to young immigrants who meet a set of strict criteria.

“I qualified for DACA in 2012, and eventually was able to adjust my status in 2015,” says Jackson. “But having papers does not erase the trauma.”

Jackson is one of the original core committee members for the Undocu Black Network which she says helps to facilitate access to resources and in her words they “blackify” the undocumented immigrant narrative.

Attorney Sharron Williams describes U.S. immigration laws as draconian with a bias in favor of immigrants from Europe and Japan, but that overall the system has a higher level of civic engagement than in many other countries.

“When I make a comparison with countries like the Dominican Republic or countries in Asia, or countries all over Europe, and what’s happening in Europe right now, what borders where that are being shut to people who are really in serious trouble, I compare the American immigration system,” says Williams. “We have a way to dialogue about these issues. At least we are talking about it. And people have the opportunity to fight for legalization. I think that is a critical difference. I am not saying we should not criticize, we should absolutely criticize the system. That’s how we make changes, by criticizing the system.”

The issue is a personal one. Williams is Garifuna and also originally from Belize. She was once undocumented herself, but eventually became a citizen through the amnesty process of the immigration reform passed during the Reagan years.

The 1986 overhaul was the last time Congress had the will to comprehensively address the nation’s undocumented population. The most sweeping reforms since then have come via executive order, with the fate of DAPA and the expansion of DACA in the hands of a Supreme Court one justice short of a full bench.

Thirty years later, Williams hopes lawmakers will find the political courage to pass comprehensive immigration reform that goes beyond DACA, the executive order she describes as a Band-Aid.

The Supreme Court is due to rule on DAPA and the expansion of DACA sometime in June.