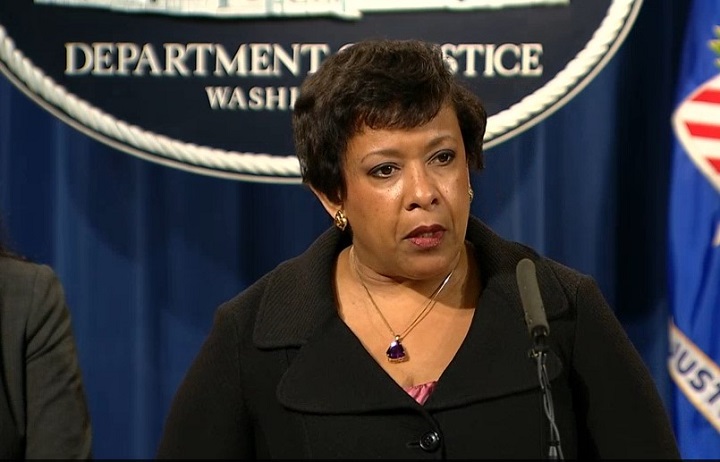 *Editors Note: The introduction to this story was updated May 13, 2016 to add the Justice and Education Department letters.

The U.S. Departments of Education and Justice are sending letters to public schools in the country, directing them to allow transgender students to use facilities that align with their gender identity. While not legally binding, the message is clear: do it, or face losing federal funds.

The battle over legislated discrimination in North Carolina moved back to the courts Monday, with both the Department of Justice and the state filing competing lawsuits over the enforcement of the so-called ‘bathroom bill.’ FSRN’s Nell Abram has more.

Attorney General Loretta Lynch spoke directly to transgender Americans as she announced a federal civil rights lawsuit against the state of North Carolina, its Governor, the state Department of Public Safety and the University of North Carolina.

“Some of you have lived freely for decades and other of you are still wondering how you could possibly live the lives you were born to lead,” Lynch said from a press room podium. “No matter how isolated, afraid and no matter how alone you may feel today, know this: the Department of Justice and indeed the entire Obama Administration want you to know that we see you, we stand with you, and we will do everything we can to protect you going forward. And please know that history is on your side.”

The claims fall under two sections of the Civil Rights Act and the later Violence Against Women Act; the suit asks the court to declare the law ‘impermissibly discriminatory’ and bar its enforcement statewide. Further, Lynch said the DoJ reserves the right to withhold funding to the state’s public safety department and the university as the case moves forward.

The announcement came just hours after Governor Pat McCrory announced his own legal action against the DoJ.

The lawsuits concern state law HB2 – also known as the ‘bathroom bill.’ The measure prohibits transgender individuals from using public restrooms that correspond to their gender identity. The bill states specifically that bathrooms designed to accommodate more than one person must be single-sex facilities, and that sex is defined as the “physical condition of being male or female, which is stated on a person’s birth certificate.”

But Attorney General Lynch says this bill goes far beyond determining who can use which restroom: “This is about the dignity and the respect that we accord our fellow citizens and the laws we as a people and as a country have enacted to protect them, indeed to protect all of us. It is about the founding ideals that have led to this country – haltingly but inexorably – in the direction of fairness, inclusion and equality for all Americans.”

The legal maneuvers follow three letters the DoJ sent  North Carolina officials putting them on notice that the law violates the federal Civil Rights Act; specifically Title VII, which protects employees from workplace discrimination on the basis of sex. Further, the Justice Department wrote that federal courts have already applied Title VII protection for transgender individuals against discrimination “based on sex, including gender identity.” North Carolina, however disputes that legal analysis.

In a public announcement earlier Monday,  Governor McCrory accused Justice Department of trying to rewrite the law, adding he expects private sector groups and even other states to join his case asking the federal courts to clarify the law.

“Ultimately, I think it’s time for the U.S. Congress to bring clarity to our national anti-discrimination provisions under Title VII and Title IX,” said McCrory. “Right now the Obama administration is bypassing Congress by attempting to rewrite the law and set basic restroom policies, locker room policies and even shower policies for public and private employers across the country, not just North Carolina.”

North Carolina lawmakers introduced, passed, signed and enacted HB2 over the course of a single day in March. Public response was swift. Human rights advocates and LGBT activists and their supporters quickly launched protests, artists and musicians cancelled major performance dates in the state, more than a dozen conventions were immediately lost in Charlotte alone, and at least two big businesses, PayPal and Deutsch Bank put plans to expand in the state on hold.

HB2 supporters say the bill is not aimed at discriminating against transgender persons, but rather to protect girls from sexual predators disguising themselves as females to gain entry to public restrooms. Opponents reject this claim, noting there are no such incidents on record.