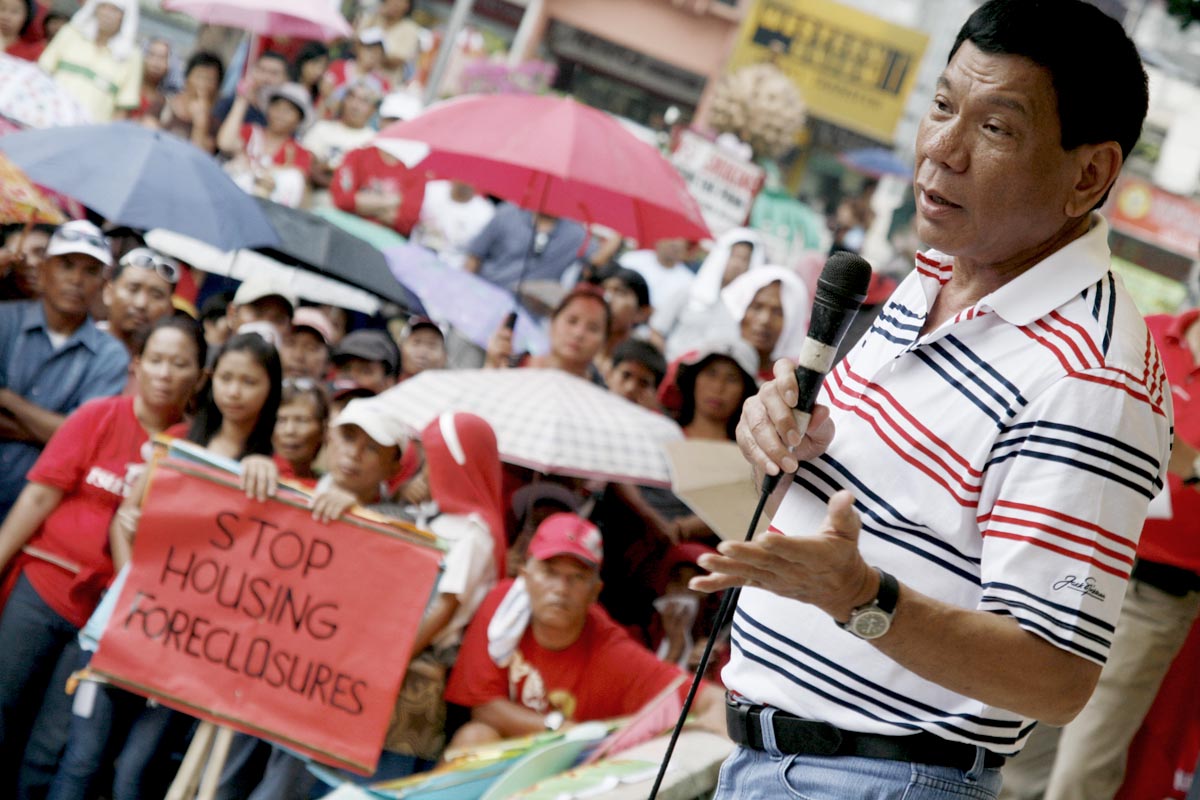 In the Philippines, some 55 million people are registered to go to the polls Monday, May 9th. They’ll cast ballots in local and national elections, choosing a new president and vice president. As President Benigno Aquino III’s six-year term comes to an end, the campaign rhetoric has been brutal. Surveys show a mayor from the southern Philippines nicknamed “The Punisher” is in the lead, winning over support with promises to clean up crime within six months of taking office. Madonna Virola reports from Calapan City.

Presidential candidates presented their platforms and discussed the issues during a series of nationwide televised debates. The stakes here are high, and in a country of nearly 100 million people spread across an archipelago of 7,100 islands, the issues are broad. While the economy has improved somewhat in recent years, widespread poverty and crime persists and corruption runs rampant.

Front-runner and Davao Mayor Rodrigo Duterte is also known as the “Punisher.” Duterte vows to curb corruption and crime in three to six months, and has admittedly ordered extra-judicial killings to cut crime in Davao. He recently generated international outrage, especially among women’s rights advocates, when a joke he made about an Australian missionary who was raped during a police riot went viral. Political rivals accuse him of ill-gotten wealth.

But none of this has affected his solid supporters, like Jumyr, who owns a printing press. He offers to print Duterte’s face on t-shirts for free.

“We’ve long been under a democratic rule,” Jumyr says. “The country needs someone with a strong heart, courageous, to reduce criminality. Only the poor ones get punished.”

Duterte has vowed to resume peace talks in Mindanao, which he says must include more rebel groups and address injustices committed against Muslims. He also wants to scrap a deal that allows U.S. military personnel to enter the Philippines for regular military exercises. He questions America’s commitment to protecting the country in its territorial dispute with China, where he maintains the South China Sea belongs to the Philippines. And he supports LGBT rights, despite the topic’s sensitivity in this predominantly Catholic country.

But Duterte doesn’t have a lock on the election. Following him in the latest polls is Mar Roxas, the administration’s candidate.

Formerly the interior and local government secretary, Mar Roxas pledges to continue the programs of the outgoing administration, which he says should be credited for the country’s economic growth. A former New York investment banker, he vows to address poverty and push the policy of creating a larger autonomous region for Muslims in the south.

But while his platform is clear, many here perceive him as weak on implementation, stemming from his lackluster performance during super typhoon Yolanda three years ago that killed more than 6,000 people in the Visayas region.

Another strong contender is political newcomer Grace Poe, who worked as a preschool teacher in the U.S. in the 1990s. Poe was adopted into her Philippine family. Legal challenges to her nationality failed, with the Supreme Court deciding in her favor. Poe’s campaign has centered on hunger and malnutrition in the country, and she pledges to fight drugs and electoral fraud.

Ballots in the Philippines separate the posts of president and vice president. The field for the number two position includes the son of a former dictator, Ferdinand Marcos, whose family has yet to acknowledge or pay for their ill-gotten wealth and human rights violations during the two-decades term of the older Marcos. But, Marcos the younger dodges any real recognition of his family’s crimes.

Marcos is running against a handful of opponents, including incumbent Vice President Jejomar Binay of the United Nationalist Alliance, and Leni Robredo, whose popularity is growing fast, as many find her an interesting alternative to the status quo. While new to politics, she is a human rights lawyer and provides legal services to the country’s poor.

“I’m still positive on the results of the elections, that the elections will be generally peaceful and the people’s right to vote will be exercised,” Melgar says.

Registered voters go to the polls Monday, and electoral reform advocates hope the Philippine tradition of buying and selling votes will give way to principled voting. Jan Winston Maronilla is a first time and millennial voter. Maronilla says he is caught between casting his ballot for who he is expected to vote for and what his heart says.