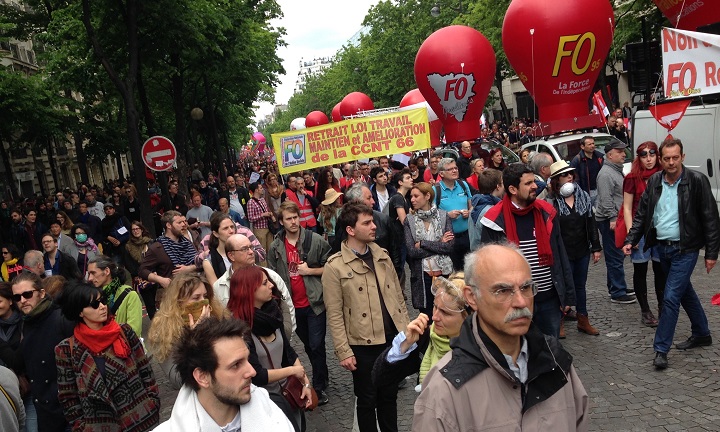 Tens of thousands people demonstrated today in France, after the government used a rarely invoked article in the French constitution to push a controversial labor law through the parliament last week, bypassing lawmakers who were widely expected to reject the measure.

Opponents of the bill say it weakens worker protections. After several weeks of widespread protests, demonstrators now hope a massive mobilization against the proposed law will make the government reverse course. From Paris, Raphaël Krafft reports.

“This law will be adopted and I will not give up like so many did before me,” French president François Hollande said this morning on French private radio Europe 1, referring to the labor law his government pushed through last week using an obscure provision of the French constitution known as Article 49.3.

Just a few hours later, tens of thousands of demonstrators took to the streets, marching in many of France’s main cities. According to opponents, the law will weaken labor protections, making it easier for employers to fire workers.

Sebastien, a 30-year-old private telephone company employee, chose not to give his last name: “I am here to express my anger against this law, against all they do, especially against 49.3. I didn’t think France could be dictatorship. That’s why I am here.”

Although polls say a majority of French people are against this proposed reform, observers believe the government is expecting the movement to run out of steam. At the end of March nearly 400,000 people marched in protest, today just a small fraction of that number demonstrated.

Trade unions are divided on the best strategy to adopt, and the strikes they called in public transport, including France’s ports, trains and airports have not been broad enough to make any real impact nationwide.

But another rally is set for next Thursday. Police response to protest is often harsh. Tomorrow, French police will gather on Place de la République for their own demonstration against police hatred in a move many here see as provocation ahead of further anti-government actions.