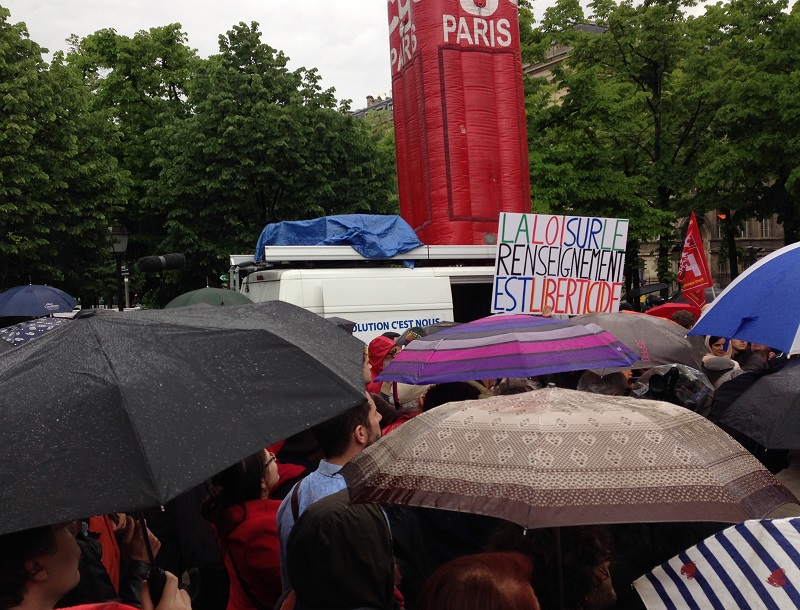 At a rainy-day demonstration near the national Assembly in Paris against an expanded surveillance bill: “The Intelligence bill is liberticidal” (Photo Credit: Raphaël Krafft)

The French National Assembly overwhelmingly passed a measure Tuesday that would beef-up intelligence-gathering powers in the country. Four months after the attacks at the offices of Charlie Hebdo and a Jewish supermarket in Paris, the socialist government hopes to capitalize on a political consensus around security issues. The bill now before Parliament is what remains of the Spirit of January 11th movement that brought millions of French citizens to the streets. But an alliance of internet service providers, civil liberties groups, journalists and non-governmental organizations – as well as a few members of Parliament — roundly criticize what they call a French “Patriot Act”, saying the bill would authorize mass surveillance and threaten the independence of the digital economy. From Paris,  Raphaël Krafft has more.

“We managed to switch the vote of a deputy, so everybody is quite happy because I think it is the first time since this morning that we are clearly sure.  So it’s amazing, it’s great,” says a decidedly pleased Sophie Janinet.

Twenty-four hours before an historic vote at the French National Assembly, Janinet and dozens of other activists gathered in the center of Paris to call each member of parliament, trying to convince them not to vote for a law that they say will threaten civil liberties.

Elliott Le Pers, a 23-year-old digital activist, initiated the action they call “24-hours before 1984,” in reference to George Orwell’s book. “It is the French Patriot Act. In fact this is creating an NSA (U.S. National Security Agency) in France and allowing NSA practices in France,” Le Pers says. “It is really weird to see that after what happened in the USA with Edward Snowden, we in France, are still willing to create such a system. It is very important for us to mobilize the public and the public opinion against this bill because we think people are not aware of what is going to be voted tomorrow.”

The new law, if passed, defines the purposes for which the government may use secret intelligence-gathering. The list includes a nebulous “prevention of attacks on the Republican form of institutions.” Opponents to the law are worried this provision could target any form of protest. The bill also aims to “protect French industrial and scientific interests,” leaving critics concerned it could be used to target journalists investigating French companies.  But their main concern is language that permits bulk collection of metadata via internet service providers.

“This bill is dangerous because it is organizing massive hearings,” says Julien Bayou, says spokesperson for the French Green Party Les Verts, referring to dragnet surveillance. “And basically, you could be listened to by the intelligence service for whatever reason, you but also your relatives, your friends, your employers, your employees. And it is very, very dangerous because it is very intrusive for the private liberty. It is also counter-productive: as you know, in the United States, these massive hearings did not prevent the Boston bombings. On the contrary, it is overwhelming the intelligence service, you have too many targets and you miss the dangerous guys.”

During parliamentary debates in early April, French Interior Minister Bernard Cazeneuve said the legislation “does not challenge the liberty of movement, it does not challenge individual nor collective liberties. On the other hand, there are provisions that can be considered as jeopardizing privacy and the right to privacy.”

In a song written specifically about this bill, French singer La Parisienne Libérée describes the measure as “worthy of the worst dictatorship. What can I do with it? Needless to shout, needless to tire yourself, needless to vote for me — I am a socialist resigned.”

Not all are. Very few socialist members of parliament voted against the law. Barbara Romagnan did.

“As a member of the Socialist Party and a left wing activist for more than 20 years, when all human rights organizations, all NGOs, all movements defending liberties, trade unions including right wing trade unions like the Union of magistrates, the National Commission for Computing and Liberties, the National Consultative Commission on Human Rights are against this law,” says Romagnan. “It never happened in the past that the Left defended a bill that goes against the advises of all these organization. Irrespective of the content of this text, this fact troubles me greatly.”

Fewer than 500 people gathered Monday night under heavy rain at a walking distance from the National Assembly to demonstrate against the bill. Harold Hyman, a Franco-American teacher and writer was among them.

“The perception in France is that we did not go nearly as far as the United States did in surveillance so that we have leeway,” says Hyman, illustrating the mindset of many in the country. “We can do a little catching up to the point of having more technically advanced surveillance whereas in the United States, the whole question has blown up so heavily that now there is a bit of a back-draft. So we didn’t have the back-draft yet. And especially, three months after the attacks on Charlie Hebdo and the Jewish supermarket and the policewoman, etc., the public opinion would be more accepting something a bit abusive like this law.”

The bill passed the lower house 438 to 86. Forty-two members abstained. The law now goes to the Senate, where a vote is expected this summer.

As opposition to the bill is growing, French president François Hollande has said he will submit the law to the Constitutional Council to insure it conforms with the French constitution.