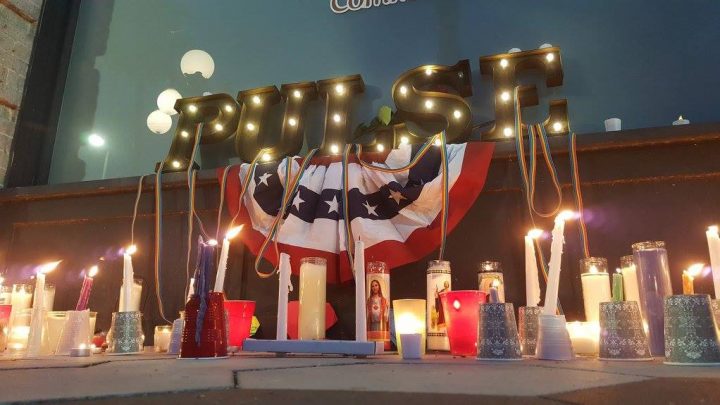 The ad hoc memorial where vigil attendees placed their candles as the Pulse massacre vigil came to a close. (Photo Credit: Nell Abram)

Grief, anger and calls to action filled the week following last Sunday’s massacre at Orlando’s Pulse nightclub. A lone gunman used an AR 15-type assault rifle and a semi-automatic handgun to murder 49 people in the popular bar that catered to a diverse, predominantly LGBT clientele. It was Latin Night at Pulse, and most of the victims were people of color. FSRN’s Nell Abram has more.

“For so many people here who are lesbian, gay, bisexual, transgender, the Pulse Nightclub has always been a safe haven, a place to sing and dance, and most importantly, to be who you truly are — including for so many people whose families are originally from Puerto Rico,” President Obama said, speaking at a makeshift memorial for the dead. “Sunday morning, that sanctuary was violated in the worst way imaginable. So whatever the motivations of the killer, whatever influences led him down the path of violence and terror, whatever propaganda he was consuming from ISIL and al Qaeda, this was an act of terrorism but it was also an act of hate. This was an attack on the LGBT community.”

Police killed the gunman,identified as Omar Mateen, after a three-hour standoff. The FBI had interviewed Mateen on three occasions since 2013, but ultimately determined he was not a threat. The 29-year-old of Afghan descent had a history of domestic violence. People who knew him say he was both aggressive and homophobic, yet some survivors say they had seen him at Pulse on multiple occasions.

Despite reports that the shooter claimed allegiance to ISIS during the attack, Obama reiterated that there is there is no evidence any organized terror group was behind the massacre. The shooter’s motivations remain a mystery, with much speculation centering around the intersection of a culture of hate, whether internalized or externalized, and extremist ideology.

The LGBT community and their allies have taken their mourning to the streets in cities and towns nationwide, and shows of solidarity took place around the world.

Ashley Green spent last Sunday glued to the news, hoping to see friends in the live shots, while fearing she’d hear their names listed among the dead. Instead, she saw some of the state’s most vitriolic anti-LGBT lawmakers, including Florida’s Republican Senator, its Governor and the state Attorney General.

Calls for, and arguments against, gun control were swift. Anger and frustration were evident on Capitol Hill as well. When House Speaker Paul Ryan called for a moment of silence Monday night, at least three lawmakers walked out of the chamber, led by Connecticut Representative Jim Hines.

“Silence. Not me. Not anymore,” Hines told his colleagues earlier in the day on the floor of the U.S. House of Representatives. “I will no longer stand here absorbing the faux concern, contrived gravity and tepid smugness of a House complicit in the weekly bloodshed.”

Hines’ indignation was echoed by his colleagues in the Senate, where Wednesday Connecticut Senator Chris Murphy took control of the floor and began what would be a more than 14 hour filibuster, calling Congressional failure to act on gun control measures “unconscionable.”

“There is a new found imperative for this body to find a way to come together and take action to try to do our part to stem this epidemic of gun violence,” the Senator from Connecticut said, “and particularly this epidemic of mass shootings that plagues this nation, and no other industrialized nation in the world. There is something fundamentally different happening in the United States.”

A string of Senate Democrats, and a few Republicans, joined Murphy’s filibuster – posing questions to extend the conversation. Finally just after 2 a.m. Thursday, Murphy yielded the floor, saying the GOP had agreed to schedule a vote on amendments that would expand background checks to gun shows and internet purchases and ban gun sales to suspected terrorists. No date for the votes has been announced.