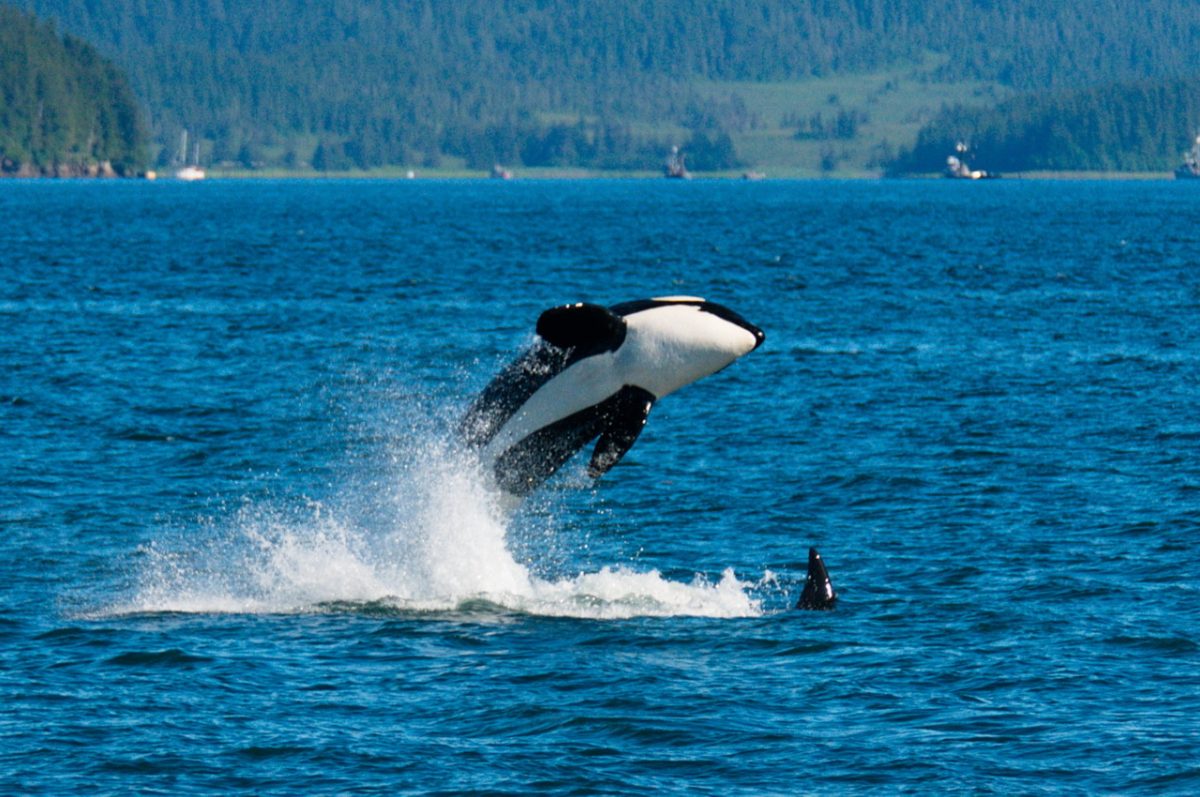 Once a thriving species, the numbers of orca whales have dwindled to below 100. (Photo credit: Dave Bezaire via Flickr / Creative Commons)

A long time ago there were thousands of orcas, as legend has it, with salmon and herring spawning by the millions. Today southern resident whales who migrate through the Salish Sea and up and down the west coast foraging for salmon, number just 83. A recent baby boom offer some hope but diminishing runs of salmon and a toxic stew of pollution and noise points to a different outcome. Martha Baskin reports from Seattle.

There are eight birthday cakes at this party resembling each of the honored guests. Blue, black and white are the color themes. The guests, eight orca calves born within the last 20 months and still living, are not at this party at Alki Beach House overlooking Puget Sound. Instead they’re likely foraging with their pods for the increasingly diminishing food supply they rely on; Chinook salmon.

You may have heard the calls of these orcas, the southern resident whales who migrate for salmon throughout the Salish Sea, to the mouth of the Columbia and all along the West Coast from Monterey to SE Alaska. And if you’re among the fortunate, you may have them seen breach with their black and white markings, calves by their side.

When Chinook salmon was predictable – both Chinook and southern resident orcas are listed as endangered – births were more common and calves more likely to survive. The orcas had far more fat on them in those years and didn’t metabolize all of it during gestation. The lack of Chinook is contributing to a high incidence of miscarriage. Today there are only 83 southern resident whales.

“Sixty percent of all pregnancies are lost before they come to producing a viable calf,” explains Deborah Giles with the Center for Whale Research. “And then out of those calves that do live, there’s a huge percentage of the calves that are born [that] don’t make it through the first year.”

Toxins in the water stream play a large role, especially for animals without sufficient body fat. When a female is pregnant she starts to metabolize all of her fat, explains Giles. If she’s able to birth the calf, during nursing it receives almost 100 percent of her toxins.

“We can see her toxic load drop almost to nothing after the birth of a calf and so that’s a huge issue for these whales as well,” Giles points out. “It’s like a double or triple or quadruple whammy.”

What it boils down to for Giles is that orcas need more Chinook salmon. If they had a more robust food base they wouldn’t be as impacted by a brutal combination of pollution, navy sonar, heavy vessel traffic and climate change.

Back at the birthday party which is a part of Orca Month and sponsored by the Orca Salmon Alliance, there are songs and resolutions. Rep. Denny Heck takes the podium and says that despite all the efforts things are going backwards.

Heck refers to the years when orcas were captured and stalked in nets for the world orca trade and overfishing. He recently introduced legislation to federally declare June orca month.

Heck says saving the orca depends on saving salmon and saving Puget Sound by finding ways to clean up one of its biggest pollutants, storm runoff.

Other advocates in the Orca Salmon Alliance say salmon recovery needs to happen wherever orcas migrate and that the single most beneficial opportunity is in the Columbia and Snake River Basin, once home to the largest salmon fishery in the world. Traditionally orcas spent much of early spring at the mouth of the Columbia to feed on Chinook.

Joseph Bogaard with Save Our Wild Salmon, a coalition of conservation, energy and fishing groups who were plaintiffs in the suit says that the agency responsible for implementing the plan, NOAA, has accepted low wild populations into the foreseeable future instead of attacking the fundamental cause of decline in the Columbia Basin; federal dams.

“What the judge did was, for the first time, close off a series of what I call escape routes the federal agencies have been using to avoid making tough choices and changes in the operation of the dams,” Bogaard explains.

NOAA’s plan relies heavily on habitat restoration projects and hatcheries to make up for the harm caused by the dams. The court also ordered NOAA to conduct a new biological opinion and full NEPA – or National Environmental Protection Act – analysis no later than March 1, 2018.

NOAA would not discuss the court ruling but is asking for five to eight years, a timeline Bogaard says is unacceptable.