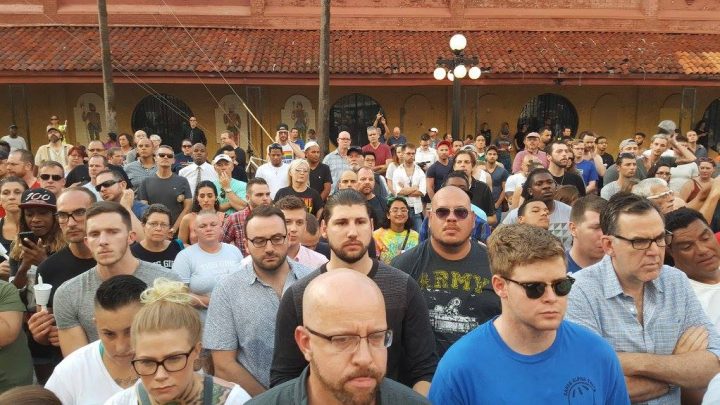 As many as 600 people lined the historic 7th Avenue in Tampa's Ybor City Sunday to remember those killed in the Pulse massacre in nearby Orlando. (Photo Credit: Nell Abram)

Florida authorities are still in the process of notifying families of those killed early Sunday in a massacre at the Pulse LGBTQ nightclub in Orlando. The mass murder of 49 people – the largest shooting by a single gunman in U.S. history – sparked nationwide shock and outpourings of solidarity. The fatal shooting of the perpetrator by police brought the death toll to 50. People organized spontaneous vigils across the country Sunday and more are expected today. Donors have flocked to blood banks across Florida. Monday morning, all but one victim had been identified; authorities still had twenty-three families to notify that their loved ones were among the dead. FSRN’s Nell Abram has more.

View a slideshow of the candlelight vigil.

Hundreds of mourners gathered Sunday evening in Tampa’s historic Ybor City to share their grief and express their anger after the massacre at the prominent Pulse gay club in nearby Orlando.

Michael Martinez formerly worked security at the club, and explains that it was much more than just a corner gay bar.

“Pulse is a place where the international community comes together,” Martinez says. “When I worked the door, I saw IDs from people all over the country,  all over the world. And people just get there because they can be themselves, they can be at ease. You didn’t have altercations, you didn’t have any problems. Everybody was accepting.”

Gunman Omar Mateen, a 29-year-old U.S. citizen, entered Pulse about 2 a.m. Sunday morning. Armed with a semi-automatic AR-15 and a handgun, he opened fire, indiscriminately shooting more than 100 patrons. Orlando police say after engaging in a shootout with officers, Mateen retreated into the club, barricaded himself in a bathroom and a hostage situation ensued.

As people trapped inside frantically texted their loved ones and word of the massacre spread through social media, family and friends flocked to the scene. About three hours after the initial barrage of gunfire, police forced their way into the building with an armored vehicle, freed dozens of hostages and killed the gunman. By the time the sun rose, anguished families desperate for information gathered at a nearby hospital.

President Barack Obama addressed the nation just hours after the end of the siege, and again Monday morning, saying the U.S. has to grapple with combating organized terrorist groups over seas while also identifying homegrown extremists influenced by sexist and homophobic ideologies.

“The point is, if we have self-radicalized individuals in this country, then they are going to be very difficult, oftentimes, to find ahead of time. And how easy it is for them to obtain weapons is, in some cases, going to make a difference as to whether they are going to be able to carry out attacks like this or not,” Obama explained. “And we make it very easy for individuals who are troubled or disturbed, or want to engage in violent acts, to get very powerful weapons very quickly. And that’s a problem regardless of their motivations. It’s a problem for a young man who can walk into a church in South Carolina and murder nine people who offered to pray with him. It’s a problem when an angry young man on a college campus decides to shoot people because he feels disrespected. It’s certainly problem when we have organizations like ISIL or al Qaeda, who are actively trying to promote violence and are doing so very effectively over the internet.”

People who knew Mateen have said he was both aggressive and homophobic. The FBI interviewed him three times since 2013 for allegedly making pro-extremist statements and after a member of his mosque carried out a suicide attack in Syria. Monday, FBI Director James Comey detailed the extensive investigations that led the bureau to determine that Mateen was not a threat. He also described the erratic allegiances claimed by the shooter during brief calls with 911 operators in the midst of the siege.

“During the calls he claimed he was doing this for the leader of ISIL, who he named and pledged loyalty to. But he also appeared to claim solidarity with the perpetrators of the Boston bombing, and solidarity with a Florida man who died as a suicide bomber in Syria for [the] al Nusra Front, a group in conflict with the so called Islamic State,” Comey explained. “The bombers at the Boston marathon and the suicide bomber from Florida were not inspired by ISIL, which adds a little bit to the confusion about his motives. And of course, we are trying to understand what role anti-gay bigotry may have played in motivating this attack – an attack that occurred during the very month when we recognize and celebrate our LGBT brothers and sisters.”

Law enforcement held regular press briefings throughout the day Sunday, and politicians hastened to the microphones as well.

Ashley Green is with the Tampa Bay Area Dream Defenders. She told the crowd at the Sunday vigil that she spent the day glued to the news, hoping to see friends in the live shots, while fearing she’d hear their names among the dead.

“And I started to see Marco Rubio, Rick Scott and Pan Bondi – people who have literally threatened the safety of the very people at that club – get up and talk about mourning, talk about how we need to stand up against terrorism.”

Green was referring to Florida’s Republican Senator, its Governor and the state Attorney General.

As candles were lit at the Tampa vigil, silence fell over the crowd. After a few moments of quiet reflection under an exquisite Florida sunset, people quietly placed their candles around an improvised Pulse memorial set up on the sidewalk, and slowly made their way back down the historic avenue.