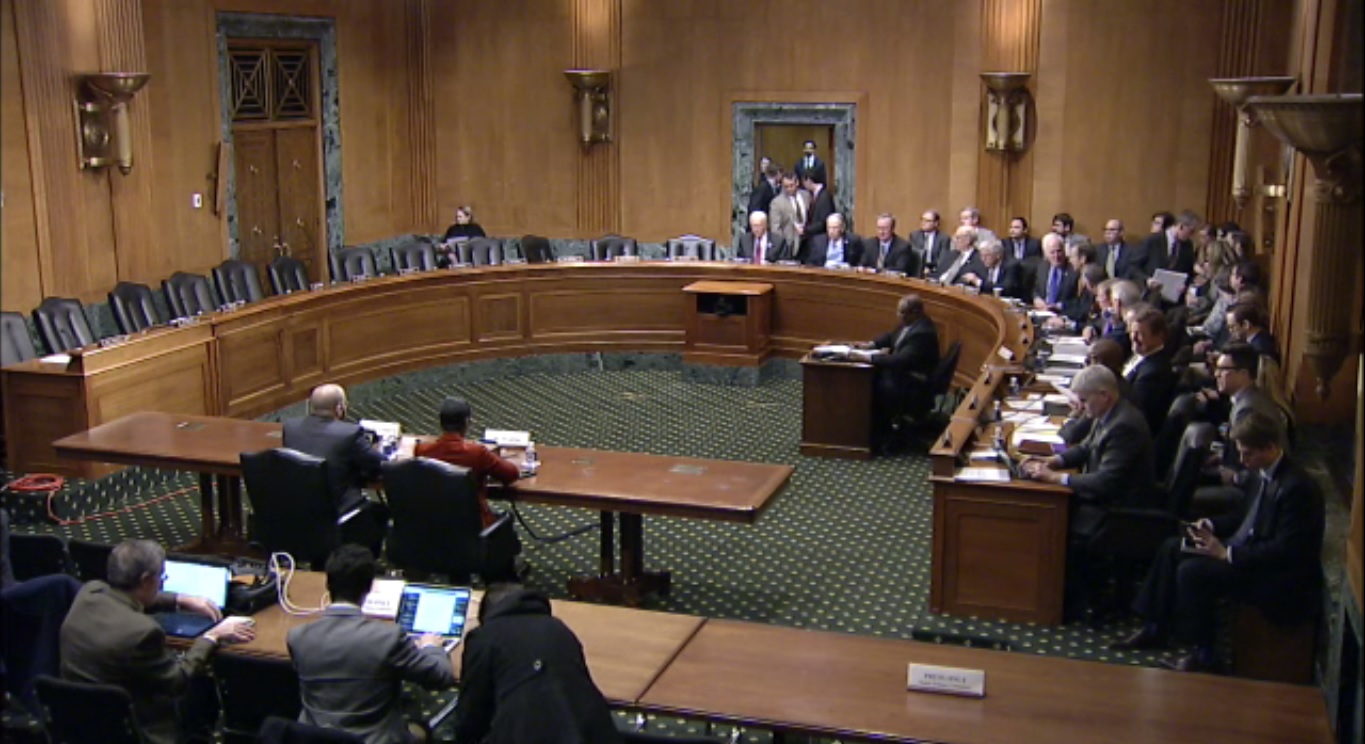 The Senate Finance Committee changed its rules mid-game Wednesday, making a parliamentary end-run around a Democratic boycott of two highly controversial Cabinet nominations. Hours later, the same strategies played out at the Environment and Public Works Committee. Meanwhile, The nomination of Senator Jeff Sessions passed out of the Judiciary Committee today along an 11-9 party line vote. FSRN’s Nell Abram has more.

The Chairman of the Senate Finance Committee convened an early morning executive session to suspend the rules that define the quorum necessary for the committee to do business. The move came after Democrats blocked action on two cabinet posts by boycotting the vote.

Under its prevailing rules, specifically Rule 4, no less than one-third of the Committee’s 26 members must be present, including at least one member from each party.

Votes were scheduled Tuesday on advancing both Treasury Secretary nominee Steven Mnuchin and President Trump’s pick to lead the Department of Health and Human Services, Dr. Tom Price. Both were delayed when the entire contingent of Democrats on the Finance Committee boycotted the meeting, robbing the body of the required quorum.

But a deeper read of the rules finds Rule 19, which allows the Committee to suspend any of its rules, at any time. So, that’s what the Republican majority did.

Wednesday morning, before any other scheduled meetings got underway, Chairman Orrin Hatch convened the meeting. All 14 Republicans on the committee showed up, filling their side of the horseshoe shaped dais in the Committee room; all chairs on the Democrats’ side remained empty.

“Mr. Chairman, I ask unanimous consent that we temporarily suspend the Rule 4 and all other applicable Finance Committee rules or procedure, to report out the nominations of Steven Mnuchin as Secretary of Treasury and Dr. Thomas Price as Secretary of Health and Human Services, and that all other rules come back in operation at the conclusion of today’s vote,” Isakson said.

“Pursuant to Rule 2 A of the Committee rules, the Chair rules that the unanimous consent request is not germane as it was not part of the original notice of this executive session. The request therefore is out of order,” Hatch said. “I now appeal my own ruling, and call for the yeas and nays. The clerk will call the roll.”

Those present unanimously approved suspending the quorum requirement – and then cast similar votes advancing both nominees out of committee and on to the full Senate floor for an up or down vote.

Both nominees met fierce opposition during hearings and in the hallways of Congress. Mnuchin, tapped to lead the Treasury Department, is a hedge fund manager and Hollywood insider known for his offshore banking activities and his role in the foreclosure crisis that gripped the nation in 2008. Health and Human Services hopeful – Georgia Republican, Dr. Tom Price – is a longtime foe of the Affordable Care Act and of reproductive rights, supports replacing Medicare with vouchers and has questionable financial ties to the health sector.

Capitol police arrested 47 people outside Senator Hatch’s office Tuesday, protesting a repeal of the ACA and opposing Congressman Price as head of Health and Human Services.

The political maneuvers appeared headed for a replay at the Senate Environment and Public Works Committee. Democrats refused to attend Wednesday, delaying action on the nominee for EPA Administrator, Scott Pruitt.