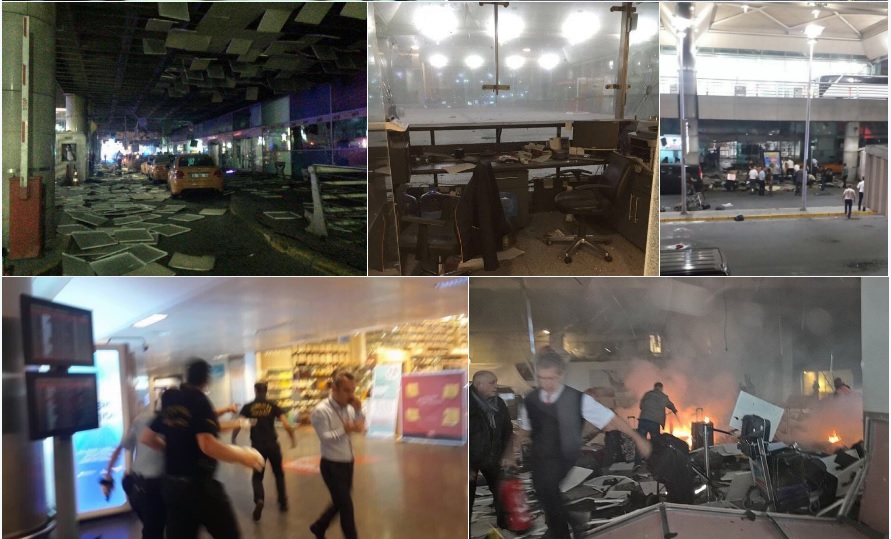 A suicide attack at Turkey's Ataturk airport in Istanbul on June 28, 2016. (Photo credit: Screenshots via Twitter)

Editors Note: a shortened, updated version of this interview appeared in the July 1, 2016 FSRN Weekly Edition.

President Obama offered condolences to Turkey following Tuesday’s suicide attacks against the country’s busiest airport in Istanbul. The death toll stands at 41 with 239 wounded after three attackers opened fire in the arrivals area of Ataturk airport before detonating explosives killing themselves and bystanders in the terminal. There has been no claim of responsibility though Turkey’s government blamed the so-called Islamic State. For more, FSRN’s Jacob Resneck spoke to journalist Yasemin Ergin who spent the night and early hours at Istanbul’s Ataturk airport.

Jacob Resneck: Yasemin, you were at the hospital the night of the attack, and so you spoke to people who were worried and grieving relatives. What were their concerns? What were they saying to you?

Yasemin Ergin: People were very upset because of the slow flow of information. I mean, there was a lot of chaos, both at the airport and at the hospital. At the airport, I saw hundreds and hundreds of people who were stuck, transit travelers who were only in Istanbul to catch a transfer flight, people waiting for relatives who were inside the building when the attacks happened, who were waiting for any kind of lists with the names of injured people, of casualties. I was at the airport for hours and I didn’t see, apart from security officials, I didn’t see a single official person from an airline, from the airport, who was there to help people with information.

JR: Looking at social media, I see people in Turkey complaining of slow downs on the internet – popular sites like Twitter and Facebook not working properly. Is the government trying to curtail information?

YE: After every one of those attacks that have happened in the last year, the government has tried to censor information. They are doing it in subtle ways. They are not blocking Twitter and Facebook completely, but they have ways of slowing it down in a way where it’s pretty much inaccessible. So people are used to this and most people have ways of getting around that. Because they are using VPN servers, they are using technological ways to go around this ban, because otherwise they’re left with the pro-government media, which will only write the official statements without asking any critical questions. And people are aware of this.

JR: Speaking of the government, what has been the official response so far?

YE: The government’s response was A) we are blaming the Islamic State on this, and B) no one is to blame, there is no official mistake that has been done, nothing could have been done to prevent this from happening.

JR: In your conversations with people, who do they blame for this violence? And what do they see as the way out?

YE: The truth is, people don’t really know who to blame, because the last big attacks, the last big terror attacks that happened in Istanbul in the last couple of years, were carried out by two different groups, either the Islamic State or the Kurdish PKK. So, they didn’t know who to blame. But, people are definitely also asking questions about the government and whether the government is doing everything that it can to protect its people.

JR: And, as you pointed out, the government is usually quick to point the blame to Kurdish militants when there’s a large-scale attack. But in this case, you said Turkey is quick to point the finger at the Islamic State, even though it comes before any official claim of responsibility from the group. Do you think the Turkish government is getting closer to admitting it has a problem with Islamic fundamentalism that might even be more serious than the Kurdish insurgency?

Yasemin Ergin is a German-Turkish freelance journalist who divides her time between both countries. She joined FSRN by phone from Istanbul.