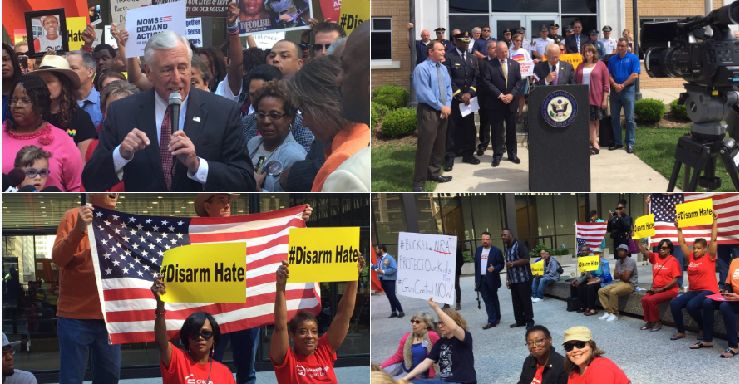 House Democrats hold public events for what they're calling a National Day of Action on Gun Violence Prevention. (Photo credit: Screenshots via Twitter)

Making good on promises to take their demand for a vote on gun control back to their districts, House Democrats convened public events across the country today in what they call a National Day of Action on Gun Violence Prevention. FSRN’s Nell Abram has more.

House Democrats went home for the July 4th recess and quickly began to engage their constituents on gun violence. At public discussions, press-conferences and rallies around the country Wednesday, they continued the call for a vote in the U.S. House on what they say are common-sense gun laws.

Illinois Democrat Danny Davis addressed a crowd in Chicago early Wednesday. Surrounded by people waving signs that read #DisarmHate and #MomsDemandAction, Davis echoed the message Democrats across the country are taking to the streets.

“We are simply saying to our Republican colleagues, to our Speaker, our neighbor from Wisconsin, ‘Put it on the floor, give us a vote and we will reflect what the American people want – and that is sensible, sane, rational, logical, gun control,” Davis explained.

Democrats want the GOP leadership in the U.S. House to allow a full vote on a number of gun control bills, including one calling for universal background checks that would close the so-called gun-show loophole and a No Fly, No Buy measure that would block anyone identified by the FBI as a potential terrorist from buying firearms.

NRA-funded Republicans largely oppose expanded background checks, and are joined in opposition to No Fly, No Buy laws by civil libertarians who are concerned about due-process for those included on such lists.

At a round-table held by Massachusetts-based gun-control advocacy group Stop Gun Violence, one mother – Ramona – described the day her son was shot and killed: “So Anthony tried to get up, they shot him in the back and killed him instantly.”

The nation-wide series of events follows last week’s 27-hour sit-in at the U.S. Capitol, led by civil rights veteran and Georgia Representative John Lewis, during which lawmakers all but shut down the House of Representatives. Only one vote was held in the waning days of the session before House Speaker, Wisconsin Republican Paul Ryan recessed early, sending lawmakers home ahead of schedule.

The one vote that Speaker Ryan did push through during the sit-in was a $1.1 billion GOP-backed Zika bill that includes provisions to cut funding for Planned Parenthood and eases restrictions on pesticides. The Zika bill made its way to the U.S. Senate, but was stopped in its tracks by Democrats who say they were locked out of negotiations on the measure.

Senate GOP leader Mitch McConnell has pledged to bring the Zika bill back for another vote when the legislature reconvenes, and House Democrats vow to continue their demand for votes on gun control.