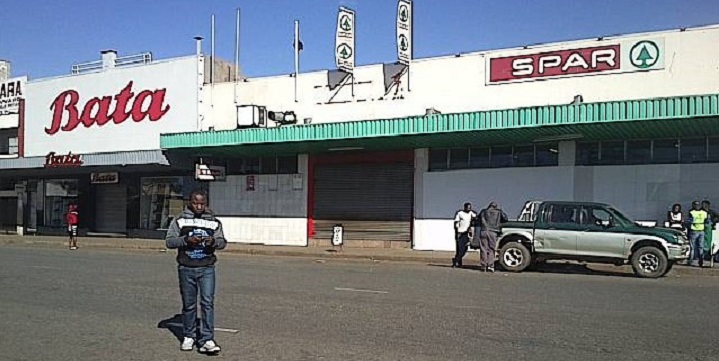 The usually over-crowded streets of Harare were nearly empty and shops were closed during a nationwide shut-down. (Photo Credit: Garikai Chaunza)

In Zimbabwe, a one-day general strike Wednesday brought much of the the country to a halt. Public sector workers stayed home and streets were largely empty, but reports of sporadic violence increased as the day progressed. The Zimbabwe Union of Journalists called on police to stop harassing reporters, saying at least four were detained and forced to erase images of violent protests in the capitol, Harare.

The nationwide action came a day after a coalition of civil sector unions, including teachers and health care workers, launched an indefinite strike Tuesday. The growing unrest in country stems from a serious cash shortage, with people camping outside banks hoping to withdraw their savings.

But a crippling trade deficit mixed with political uncertainty has drained the government’s cash reserves living many high and dry and threatening a break down in public order. FSRN’s Garikai Chaunza reports.

The streets of Harare are eerily quiet Wednesday afternoon after the government warned state workers not to join protest actions over delayed payment of salaries. Many schools and businesses closed and street traffic was scarce. Hospitals and clinics are running on a skeleton staff and only admitting emergency patients.

Anger over the economy has been smouldering for months. Since April, Zimbabwe has been plague by a severe shortage of dollars and rands. Banks have been running low and limiting withdrawals.

Recently Everisto Chikanga found himself stuck in line waiting for money. He lives in the U.S. but was back home visiting relatives. But he says the homecoming has been bittersweet — he’s got little cash in his pocket and even his Visa card is useless to withdraw money.

“I need money, even simple money for fuel to put in my car,” Chikanga said. “Money for transportation … I cannot access all my money. I can simply say my life is at a standstill right now because of my inability to access my funds.”

The cash crunch has also brought many businesses to a standstill. The government has encouraged merchants to install credit card machines to get around the cash shortage.

Grocery store owner Mike Mhungu recently invested in a credit card machine. But he says most of his customers are too poor to afford debit cards so paying by plastic isn’t an option.

“We mostly sell to ordinary people,” said Mhungu, describing the effect on his mostly-cash business. “And because of the financial exclusion of the ordinary man and not a number of them have facilities to swipe or to use plastic money to buy their goods. So we have a problem and we only have a few people who can afford to use plastic money and the rest have no cash so business is very, very low.”

So why is the country short of cash? Zimbabwe hasn’t had its own currency since 2009 when hyper inflation made the Zimbabwe dollar virtually worthless. So the economy now runs on imported U.S. dollars and South African rands.

Zimbabwe’s Reserve Bank Chairman John Mangudya recently blamed much of the dollar and rand shortages on currency speculation and hoarding. But during the hearing in Parliament he admitted much of the culprit is the country’s crippling trade deficit.

That trade deficit has drained reserves of foreign currency. The fact that Zimbabwe doesn’t have an official currency means it can’t set its own fiscal policies and that’s not sustainable.

“It can either join the Rand monetary union and adopt the Rand,” according to Roy Magosvongwe, an economist working as an investment advisor, who said Zimbabwe needs to pick a currency and stick with it. “… or it can adopt the U.S. dollar. Then it needs now to deal with issue of production because it is a net importer as it is, obviously is, losing U.S. dollars out as opposed to earning U.S dollars so obviously there is going to be shortages at some point.”

But economics aside, Magosvongwe says much of the capital flight can be put down to a familiar problem — corruption: “It is very rampant it is just a tip of the iceberg the authorities have not confronted that issue or admitted to it but that is the key problem.”

Zimbabwe’s government has proposed circulating bond notes pegged to the U.S. dollar. But University of Zimbabwe economy professor Ashok Chakravarti says that would create a quasi-currency system doomed to fail. And for a simple reason.

“Okay, if I have one U.S. dollar in cash and somebody has two U.S. dollar bond notes they will say give me one dollar and I give you the two bond notes. So immediately it has been depreciated and that is definitely going to happen,” explains Chakravarti. “I have predicted that within six months the bond note will fall to zero value”

Similar cash shortages in 2008 ended in riots and Zimbabwe’s President Robert Mugabe entering into a power sharing agreement with opposition parties. But after regaining an absolute majority in 2013, the coalition was dissolved and ended the reform programs.

Now, economic insecurity is turning into social instability in Zimbabwe as protesters, fed up with shortages and state corruption, clash with police in increasing acts of violence.

Opposition figures and former members of Mugabe’s ruling ZANU-PF party have called for new elections. But so far there are no signs that 92-year-old President Robert Mugabe and his allies plan to give ground willingly.