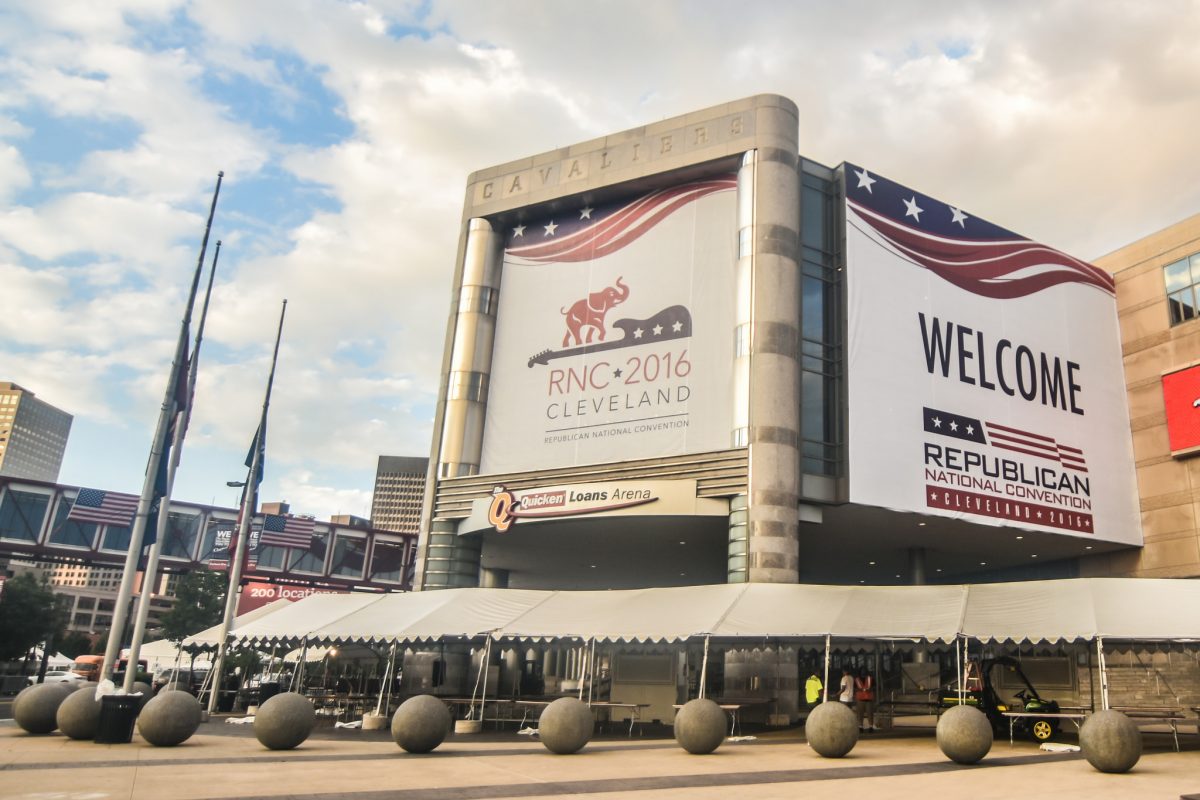 The Quicken Loans Arena in Cleveland is the site of the 2016 Republican National Convention. (Photo credit: Erik Drost via Flickr / Creative Commons)

The Republican National Convention officially kicks off Monday. Protesters have been on deck for days amid ramped up security in the host city Cleveland.

But despite a plea by the city’s police union to suspend the state’s open-carry law during the convergence of GOP delegates and potentially armed protesters,  Ohio’s governor says his hands are tied and citizens are free to openly carry guns.  FSRN’s Evan Davis is there.

As the Republican delegates begin their party’s nominating convention in downtown Cleveland today, citizens representing the breadth of the political spectrum have already been staging rallies and protests around or near the now heavily fortified downtown area.

The city of Cleveland received a $50 million federal grant to provide security for the Republican convention, and from the looks of things near the convention center, one might think that money was mostly spent of heavy metal barricades and cages. Road closures and security checkpoints have made the usually difficult-to-navigate downtown area nearly impassable, leading many offices and downtown businesses to shut down for the week. But a few blocks away in the public square, a day-long roster of speakers and protests promise to attract at least some of the pedestrian onlookers willing to brave the movable maze.

The largest of today’s rallies will be a pro-Trump gathering at a nearby park featuring right-wing radio talk show host Alex Jones, and at 2 p.m. on the city’s near east side there will be a march against poverty organized by a coalition of groups, including the Cleveland chapter of Jobs With Justice.

“We are a coalition of labor, faith and community organizations that do worker justice issues, says Deb Cline, director of Cleveland Jobs With Justice. “This is a march for the issues, this is not a march against the RNC or any particular candidate at the RNC.”

“What is the idea behind holding a march in conjunction with the RNC?” FSRN asks Cline.

“We have a lot of hateful rhetoric out there right now that we need to counteract,” Cline replies. “One of the issues that’s part of the march is immigration, and immigration reform, and that’s because that’s something that our organization has worked on over the last few years. So we know how the presumptive candidate feels about immigrants. It’s our answer back, to say, ‘We don’t agree with what you’re saying, we don’t agree with the hate, we don’t agree with the violence. So here we are in a peaceful march.”

Cline says she is hoping the march will draw in excess of 5,000 people

More events are scheduled for each day through Thursday, culminating with a march led by a group of medical professionals calling themselves STAT – which stands for Stand Together Against Trump. Organizers Monica Moran and Brian Hambley say that the two main foci of their event are immigration reform and women’s rights.

“If you walk into a lab or hospital here in Cleveland, you’re likely to see a portrait of America, every ethnic group represented, every religious group represented. And many of these people, I’ll say, are immigrants. They were born in other countries and they came here to contribute to our scientific research, to our medical community,” Hambley points out. “And many of these are even Muslim immigrants, the exact ones that Trump has attacked. Banning immigration from Muslim countries, like Trump has suggested, would directly impact our hospitals here in Cleveland. But also, for people around the country, there’s a good chance you’ve had a doctor from one of these countries.”

“We’re concerned also about the way Donald Trump has spoken about women, and being overtly sexist in what he says. And a bunch of physicians and nurses and researchers are also female,” explains Moran. “Myself, as a woman, and as a mother – I have two young daughters and a young son – I think that the way that Trump speaks about the role of women – their thoughts, ability to contribute, or anything else – is inexcusable. And I would feel like, as a professional woman, I need to stand up and speak against that, and that’s what a number of the other professional women agree with.”

There have been no significant clashes between opposing demonstrators or between demonstrators and police. Over the weekend the head of the Cleveland’s police union urged the governor, unsuccessfully, to suspend the state’s open carry law, as a number of groups – mostly Trump supporters – have pledged to bring their guns to the rallies. But so far, here on the morning of this first day, most of the visible guns have been the ones reposing calmly in the hands of the police, and even the rhetoric from supporters and protesters alike has been of a non-violent nature.