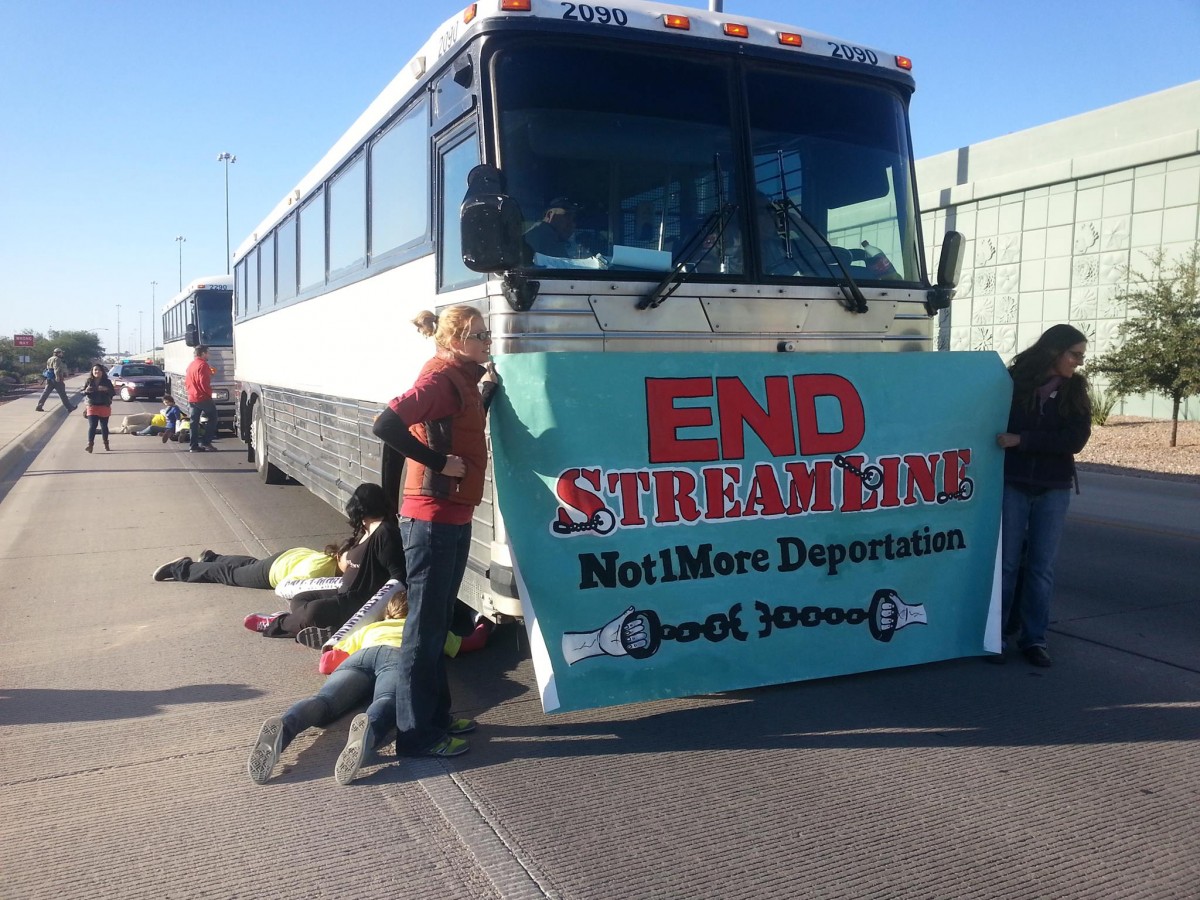 Today marks 10 years since Operation Streamline took effect. The policy significantly increased the caseloads in criminal courts along the southern U.S. border by criminalizing what used to be a civil offense:  illegal re-entry into the United States. Operation Streamline started as a pilot program in the Del Rio sector of the Texas border, but later expanded to Yuma, Arizona; Laredo, Texas and eventually to all southern border sectors except those in California. To take a look at what the net effects of the policy have been a decade later, FSRN’s Shannon Young spoke with Bethany Carson, immigration policy researcher and organizer at Grassroots Leadership in Austin, Texas.

Shannon Young: Operation Streamline criminalized what had been a civil offense of unauthorized reentry into the United States. What exactly are the criminal penalties, how are the court proceedings conducted and where are the sentences served?

Bethany Carson: So, the federal illegal entry charge is up to 180 days in federal prison, and then for the reentry charge, it can be up to 10 to 20 years. And, what’s called Criminal Alien Requirement prisons, which are segregated prisons specifically for immigrants, and the prosecution are really something truly terrible to observe. Up to 80 people can be prosecuted at one time, they’re handcuffed and chained at their ankles and at their waist. And, after meeting with a defense attorney, for anywhere between minutes to about an hour, usually the morning of the court proceedings, nearly everyone decides to plead guilty just because of the risk of not doing so and how much time they could spend incarcerated while arguing their innocence. So, these proceedings, which would usually spend months, are collapsed into a single, short hearing.

SY: Ten years after the launch of Operation Streamline, what would you say have been the net effects of the policy, compared to its stated goals?

BC: Well, the stated goal was to deter migration, and that has not happened. It criminalized people who are coming to reunite with their families, to seek asylum, to economically sustain themselves and their families, and so the reasons that people come, they’re not going to be deterred by prison sentences. And speaking with federal public defenders, they will tell you that they see people come back again and again. And, this is also a policy that has funneled people into for-profit federal prisons, that are segregated prisons specifically for immigrants, with worse conditions, the rationale being that they don’t want to spend money on people who are not going to be coming back into American society and will be deported afterwards. This has also dramatically increased the proportion of Latinos in the federal prison system. And, also, illegal entry and reentry charges are now the two top criminal charges being filed in our federal court systems. Together, they form nearly 50 percent of the entire cases filed for prosecution. And this would be incredibly troubling in our current political environment, that it is actually working to end mass incarceration across bipartisan lines.

SY: The program has been implemented in all southern border sectors except for those in California. Why is that?

BC: California decided that their resources would be better used in going after different types of prosecution than not participating in the illegal entry and reentry mass prosecutions. So, their court resources are largely being used in a more successful way.

SY: I’d like to shift the discussion now to another controversial immigration policy; and that’s family detention. Your organization, Grassroots Leadership, challenged a move by policy makers in Texas to license family detention centers as childcare facilities. This is in response to a federal court ruling earlier this year that indefinite detention of immigrant minors in jail-like facilities violates a long-standing agreement known as the Flores Settlement. Can you bring us up to date on where things currently stand?

SY: I want to follow up on that with a question regarding the order  issued by Judge Dolly Gee to release minors from indefinite immigration detention by an October 23rd deadline. Was that deadline largely ignored or what happened?

BC: It has been largely ignored. The other thing that has happened is they have sped up the process through which families are cycling in and out of these facilities. And so, people are generally staying for under a month now in an attempt to comply with the decision. But that’s largely not something to be celebrated, as people’s rights to fight their cases are being violated, their requests for re-interviews that are being denied at various points in their cases, and people are being sometimes quickly deported.

SY: Bethany Carson, is there anything else you’d like to add that I didn’t touch on with my questions?

BC: Yeah actually, I wanted to talk just a little bit about the days of action to end Operation Streamline that we’ve been coordinating in the last week. Last Wednesday kicked off the National Days of Action of End Operation Streamline and the prosecution of migrants. Here in Austin last Friday, we held a march and performed street theater on the steps of the federal courthouse to call on the Department of Justice to end these prosecutions. And in Tuscon on Monday, a group of clergy interrupted the Operation Streamline court calling to the migrants being prosecuted, “You are not guilty, this court is guilty,” and reading verses from the Bible. They were then escorted out of the building. This Friday there is also a march planned in McAllen on International Migrants Day that will focus on ending Operation Streamline. And, for those of you who may not be in Texas or able to come out to these actions, you can get involved by signing our petition, which you can find by going online to grassrootsleadership.org, and click on “Programs” and “Operation Streamline.”

Bethany Carson is the immigration policy researcher and organizer with Grassroots Leadership, an advocacy organization that opposes for-profit detention. She spoke to Shannon Young by phone from Austin, Texas.