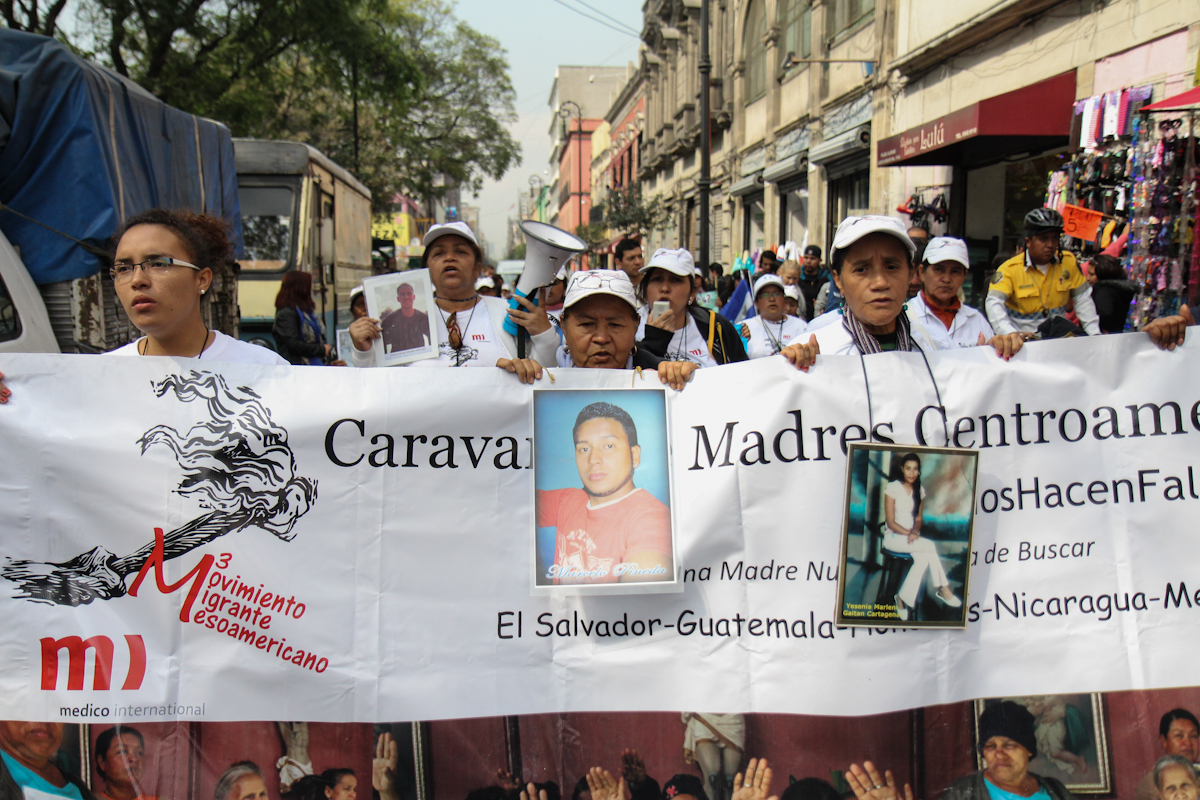 Prisons, red light districts, homeless shelters and train tracks. These are just some of the places that a group of mothers from Central America are visiting in search for their missing loved ones as they caravan across Mexico. There’s no definitive official data on the numbers of migrants who have vanished in Mexico, but advocacy organizations that work with Central American families put the numbers in the thousands. Andalusia Knoll has more from Mexico City.

The group of around 40 Central American women carrying large portraits around their necks turned the heads of curious onlookers as they walked through downtown Mexico City into the La Merced market district.

La Merced is home to what is perhaps the largest and most visible hub of Mexico’s commercial sex industry. The women have come here to search for missing relatives who may have fallen victim to traffickers and to meet with sex worker organizations to ask for help.

“They probably won’t find the 50 or 100 girls who look like the ones in the pictures,” said Alma Delia, founder of a sex workers coop, as she looked at the photos of the disappeared to see if she recognized anyone. “But they may find one or two who could help lead them to clues or a path towards the truth about these missing women.”

This is the eleventh time a caravan of Central Americans have traveled across Mexico, looking for relatives who have gone missing along the migration routes that lead to the U.S. border. The women are part of mutual aid groups that began forming in their home countries as the numbers of missing migrants rose to crisis proportions. They work closely with a network of human rights activists in Mexico, many of them affiliated with migrant shelters run by Catholic priests.

Ruben Figueroa is with the Mesoamerican Migrant Movement, an organization that helps coordinate the caravans. He says that while Central Americans fleeing violence and poverty aren’t widely regarded as refugees in the same sense that Syrians are, their situation is also desperate.

“Perhaps in Central America or in Mexico, bombs aren’t heard but blood is spilled,” Figueroa explains. “There’s the same situation of danger and persecution. And there’s the chronic poverty, which fuels mass displacements around the world.”

Violence in many parts of Central America has spiked. Honduras has one of the highest murder rates in the world, while homicides in El Salvador this summer reached levels unseen since the end of the country’s civil war.

Many see the United States as the most viable regional option for both physical and economic security, but the journey through Mexico has also grown more dangerous in recent years. That’s largely due to the hostile takeover of the migration routes by organized crime and their corrupt allies within law enforcement agencies.

Extortion, rape, kidnappings, and murder have all become part of the common risks associated with transmigration through Mexico. Sometimes the motives for preying on migrants are economic or opportunistic. Other times, the brutality has no clear explanation.

Lourdes Suazo’s brother, Mauricio Francisco Suazo, was among 49 murder victims whose torsos were dumped in the middle of a highway in the northern Mexican city of Cadereyta on May 13, 2012. She says the outrage she felt at receiving her brother’s body in pieces drove her to join the caravan “to demand justice and help other family members find their loved ones.”

The Cadereyta massacre was one of three, large scale multi-homicides to target migrants in recent years. The other two occurred in the nearby San Fernando valley of Tamaulipas. The official investigations into the killings have been shrouded in government secrecy, despite lengthy legal battles waged by journalists and human rights organizations.

More recently, transmigration has been further complicated by a U.S. funded program known as Plan Frontera Sur. The program has funneled tens of millions of dollars into militarizing Mexico’s southern border and providing support to immigration enforcement within the country. It began in 2014, amid a so-called “surge” in apprehensions of unaccompanied Central American minors in South Texas. Since the program’s implementation, Mexican authorities have deported more Central Americans than their U.S. counterparts.

Caravan organizer Ruben Figueroa says Plan Frontera Sur has made the journey even more dangerous than it already was as migrants avoid traditional routes to minimize the risk of detention: “We could say that migrants suffer persecution by the Mexican authorities along the southern border and by organized crime along the northern border. It’s become more difficult and has intensified the humanitarian tragedy migrants go through. They are pushed further into the shadows and thereby become more vulnerable to human traffickers and organized crime which seeks to profit off them.”

Despite the tales of tragedy, the caravan participants travel with a palpable sense of optimism. That’s because, in years past, the caravans have been able to reunite some families. And this year in no different.

“I’m really excited. I came filled with the hope of finding my sister because hope is the last thing one loses,” said Gloria Sáenz Santeliz. She’s spent the past eight years looking for her sister, Esperanza. “I’ve always said I’d do everything in my power to search for my sister and this time, it was my turn to find her.”

Sáenz received a call from her sister while in Mexico and they have arranged to meet up in person in the coming days and return to Nicaragua together.

During this year’s caravan, four missing persons have been reunited with family members. It’s that hope that keeps the mothers coming back year after year.

But they don’t want to feel alone in the effort. They want officially-backed search efforts involving Mexico, the United States and their home countries. And they’d like to see an end to the poverty and violence at the root of the mass migrations into which their relatives disappeared.