Street Beat: Voices from outside the RNC 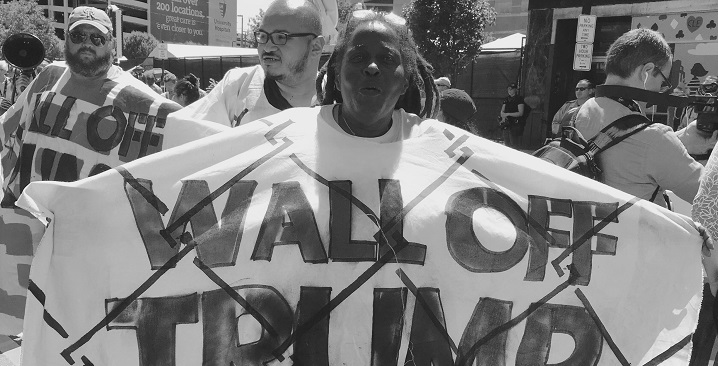 Activist Connie Burton came from Tampa to "Wall Off Trump." The wall of protesters temporarily shut down an entrance into the convention hall. (Photo Credit: Kelly Benjamin)

After a roll call vote that saw more than 700 Republican delegates cast votes for anyone but the presumptive nominee, Donald Trump was officially named the Republican candidate for the U.S. presidency Tuesday night.

While mainstream media focused their cameras largely inside the Quicken Loans Arena in Cleveland, Ohio during this week’s Republican National Convention, colorful demonstrations and dynamic speakers were in the streets outside.  The day after the ticket became official, police arrested about 10 members of the Revolutionary Communist Party after they blocked an entrance to the convention site.

FSRN’s Kelly Benjamin roamed the streets talking to a range of people from a Cleveland local to veteran activists who traveled to the Buckeye State for the event.

View a series of photos from the street scene outside the convention.