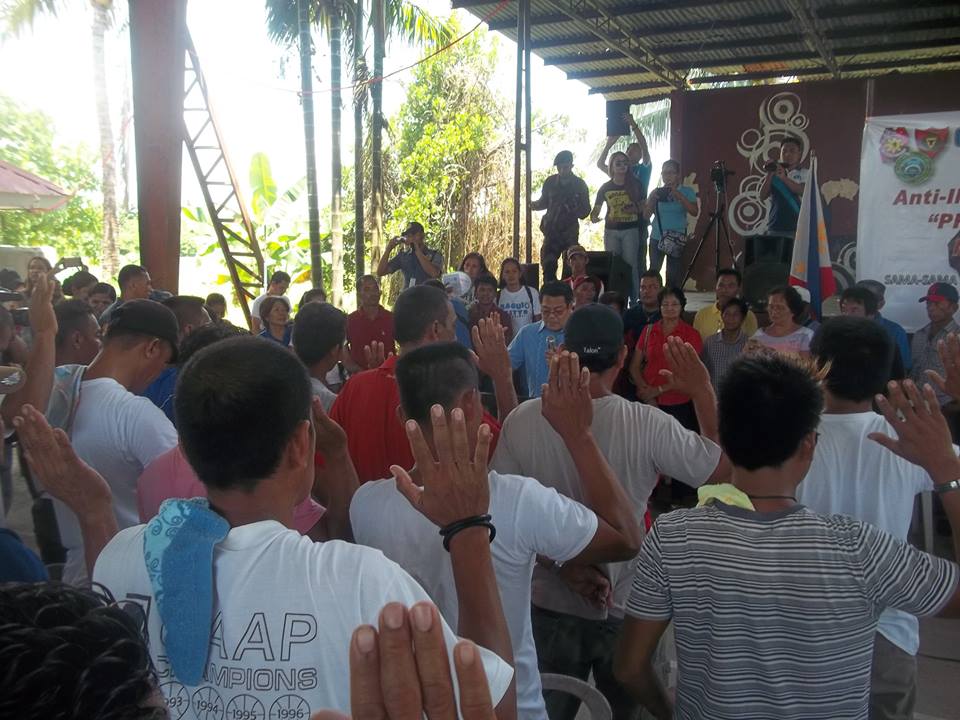 In the Philippines, newly-elected President Rodrigo Duterte is making good on campaign promises to stop corruption and criminality, including drugs, during his first six months. But human rights advocates are concerned about a campaign against drugs built on a foundation of extra-judicial killings. FSRN’s Madonna Virola has more.

As more than 1,000 drug users surrender in the City of Calapan, Mayor Arnan Panaligan leads them in reciting an oath that says they will turn away from drugs. These are the most recent of what government figures say are at least 60,000 people who have turned themselves in under a program known as “Oplan Tokhang.”

Under orders from newly inaugurated President Rodrigo Duterte, police knock on the door of known drug users and convince them to surrender to authorities. After making their pledge, most will be released on a weekly monitoring plan and rehabilitation program.

In the run up to the election, President Duterte – also known as The Punisher – warned that he would use the same harsh methods to curb drug abuse and crime as he did for two decades as Mayor of Davao City in the southern Philippines.

“I told you to avoid me,” Duterte said. “I’m telling the Filipino people, ‘huwag ako [not me],’ it’s going to be bloody.”

Still, he won by a landslide during the May 7 elections. Since May 10, the national TV Network ABS-CBN reports more than 500 drug fatalities, many of these in bloody encounters in Manila.

Duterte has empowered police to shoot alleged drug users when they resist arrest, assuring officers of a pardon when doing their job.

In a recent statement, the Citizens Council for Human Rights, a national network of advocacy groups, social movements and individuals, said “extra-judicial killings are normalizing criminality under the guise of peace and order.”

“We essentially condemned the massive killings that has been unleashed on our society. But what’s so telling about this problem is that many of victims are largely the poor people, who are either so-called drug addicts or suspected of being drug pushers,” Joshua Mata, secretary general of SENTRO, a progressive labor organization. “It should be clear to everyone that Philippine law does not have death penalty, therefore, even drug addicts and pushers should not be killed, rather they should be arrested or the drug addict should be rehabilitated. The president has blood on his hands for sanctioning for all these murders which has in the past created a dangerous climate of impunity that is now being used to silence even human rights defenders.”

Mata said they have been receiving threats but will not stop promoting human rights. The coalition is calling for lawmakers to order an independent investigation of the killings in the country – a nation that’s signatory to international agreements against police abuse, extra-judicial killings and the death penalty.