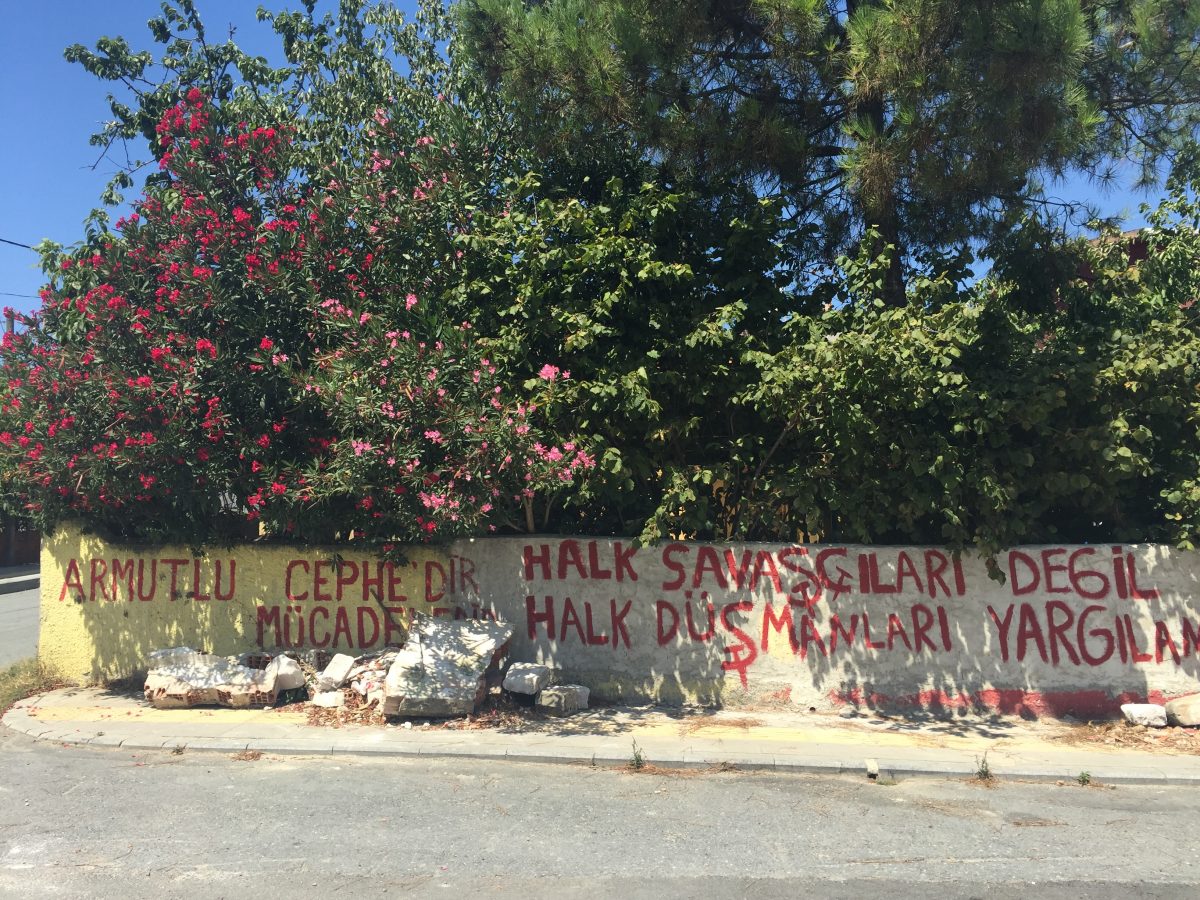 Graffiti reading: "The enemy of the community has to be judged, not those fighting for the community" in the Kucukarmutlu district of Istanbul, Turkey. (Photo credit: Fariba Nawa)

Turkey’s parliament granted President Recep Tayyip Erdogan sweeping powers Thursday after declaring a three-month state of emergency as he vows to rebuild the nation’s military from the ground up. Still reeling from a failed coup attempt blamed on followers of a U.S.-based Islamic cleric, police, judges and school teachers have been fired, arrested and detained with the ongoing purge now numbering more than 60,000 people. The government also announced it’s suspending the European Convention on Human Rights, which this spring ruled that Turkey discriminates against Alevis, the country’s largest religious minority. FSRN’s Fariba Narwa reports.

By now it’s a well known story. As a faction of military officers sent troops, tanks and warplanes in an attempt to topple the government, the Turkish president went on live television to call on his supporters to mass in the streets.

Thousands of religiously conservative Sunni Muslims heeded the call of President Recep Tayyip Erdogan, some of them killed as they faced down soldiers in the streets. The shooting is over for now, yet street demonstrations by government supporters continue in districts across Istanbul and beyond.

He recalls the night of the attempted coup when Erdogan’s nationalist supporters tried to march into the Gazi district of the city, a stronghold for Alevis and leftists. Political and religious tensions have long existed between Gazi’s residents and the government. That’s led to a standoff as Gazi’s residents erected barricades to keep Erdogan’s supports out.

“A group – 50 to 60 people – wanted to enter this area but the people formed a barrier and didn’t let them get in,” Sinan recalled. “From that second the people started doing shifts after 6 p.m. in case the group returned.”

Alevis tend to be liberal. They’re not well-known outside Turkey, but about a fifth of the population. Hard numbers are impossible to come by as their faith, an offshoot of Shia Islam, has no legal standing in Turkey. Alevis don’t pray in mosques and they don’t observe Ramadan. Women rarely cover their, hair unless they’re in the prayer hall.

Women like Nuray, a 42-year-old Alevi who lives in the Istanbul neighborhood of Kucukarmutlu. She says her distinct identity of being an Alevi makes her a target as the politics of polarization play out.

“It will get worse for Alevis, because people will become divided and create different groups,” she said. “Erdogan says Alevis aren’t Muslims because they don’t pray and they don’t fast. For this reason, he doesn’t like us.”

Turkey is frequently criticized for discriminating against Alevis. The European Court of Human Rights condemned Turkey in April for not recognizing the faith practiced by the country’s largest religious minority. But Turkey now says it’s suspended the court’s jurisdiction during an open-ended state of emergency.

For people like Ibrahim, a retired 61-year-old Alevi who has lived through different regimes, this is nothing new. On a local level, he’s upset by urban development plans that would displace working class Alevis from his district of Istanbul.

We just want to live with our rights at the place which we built and struggled for,” Ibrahim said. “We gave blood, people of our community died in this area so we want to live in it.”

As the Turkish government continues to round up whomever it considers disloyal or potential enemies of the state, more and more people are being brought under suspicion by the state intent on purging what it sees as potential threats.

This comes as the Turkish president continues to speak openly of bringing back the death penalty to deal with so-called traitors.