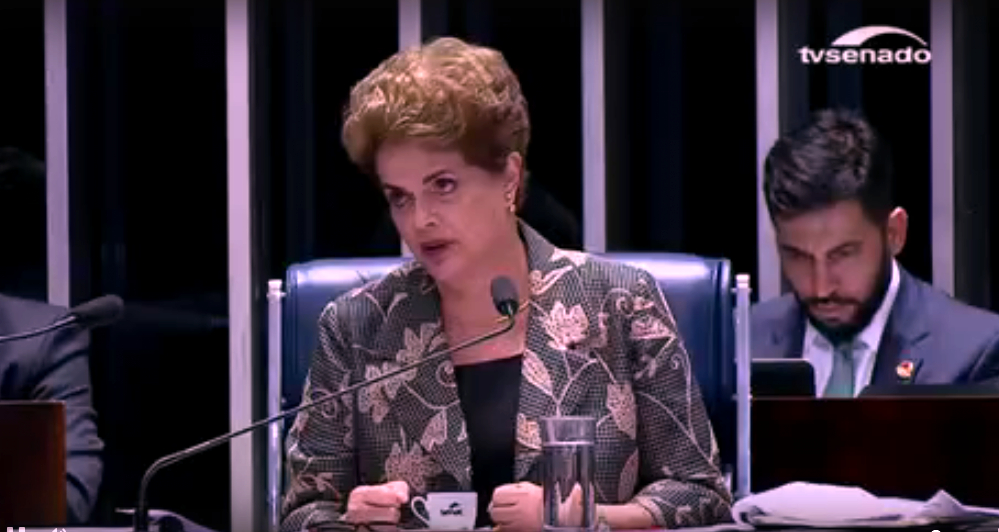 Brazil’s suspended president Dilma Rousseff spoke in her own defense today as part of her impeachment trial before the Senate. Rousseff maintains that she is the victim of a parliamentary coup and calls the impeachment unconstitutional. FSRN’s Sam Cowie reports.

Brazil’s suspended president laid out the case in her defense in a 30-minute speech before the Senate Monday morning ahead of taking questions from senators.

During her defense, she affirmed that she is the victim of a parliamentary coup, that her impeachment is unconstitutional and that if ousted, social gains made under the Worker’s Party government will be reversed.

“What is at stake here with impeachment isn’t just my mandate,” stated Rousseff during her oral arguments. “What’s at stake is the respect for the vote, the will of the Brazilian people and the constitution. What is at stake here are the gains made over the last 13 years for the poorest and the middle class; the professionalization of the youth at universities and colleges, the raises in the minimum wage, doctors treating the population and the dream of owning one’s own home.”

The former Marxist guerrilla who was tortured under Brazil’s military regime maintains that the conservative elite of the country’s political establishment has never accepted the Worker’s Party in power and is behind the push to impeach her.

Rousseff is accused of manipulating government budgets to mask a looming deficit ahead of her 2014 reelection. She denies any wrongdoing.

Not all Senators have indicated how they intend to vote, but it’s widely assumed the pro-impeachment camp has the two-thirds majority needed to permanently oust Rousseff.

If that’s the case, interim president Michel Temer will take over as acting president until 2018 when Brazil will hold general elections.

Temer is a traditional conservative Brazilian politician who is expected to enact social spending cuts and further privatizations of state assets. He defends the unpopular austerity measures as bitter but necessary steps to get Brazil’s flailing economy back on track.

The Senate will hold its final vote on impeachment Tuesday with results expected Wednesday morning.