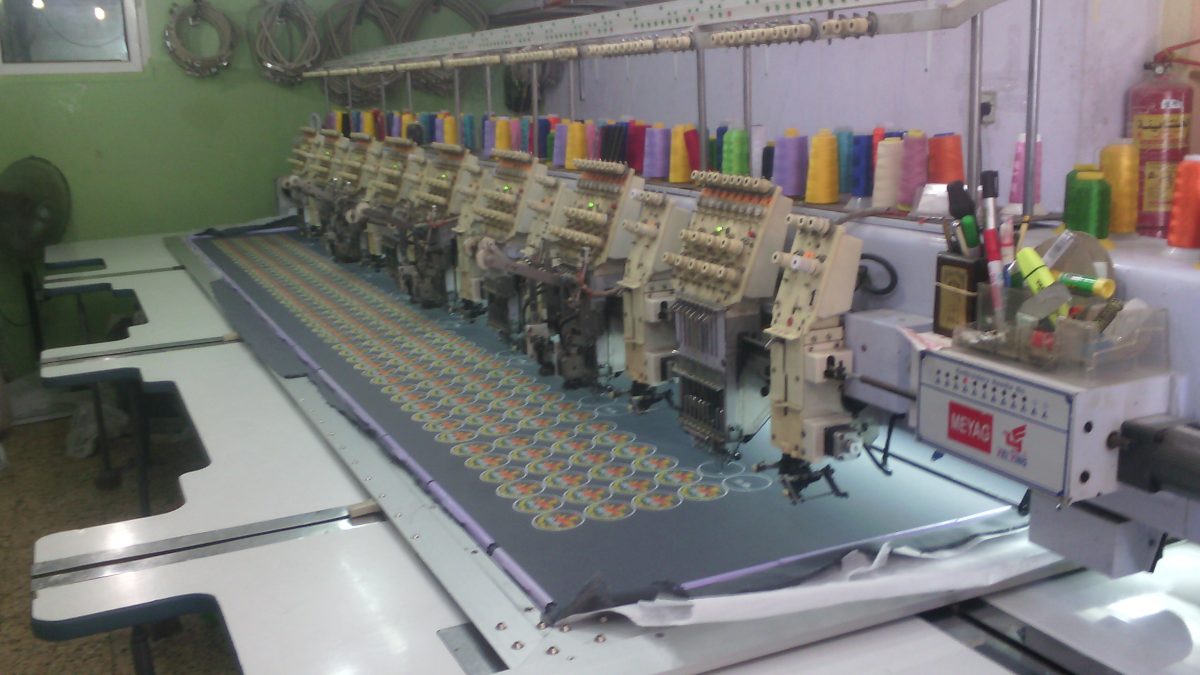 There’s some good news from Gaza. Its garment industry is picking up now as Israel eases its blockade against commercial exports. Before the 2007 war with Israel, Gaza’s garment sector was a major source of wealth, but like most things has been devastated by crippling sanctions. And as FSRN’s Rami Almeghari reports, commercial orders are coming in from Israel, which breeds new optimism for Gaza’s export economy.

For the past nine years, clothing stores in Gaza have mainly stocked imported brands. Toufic Alnaffar, a 67-year-old who owns a clothing store on Omar Almokhtar Street in the heart of Gaza City’s shopping district, says stocking the racks is a challenge with popular items selling out fast.

“If local products were available all the year long, traders could pick up whatever clothes we wanted, every day,” Alnaffar explains. “For instance, this imported t-shirt has been missed from the market since before the last festival of al-Fitr Eid. I’ve been looking for it, but can’t find it anywhere.”

Israel’s blockade on the Gaza Strip makes imported goods expensive. But Gaza does have a well-established garment sector of its own.

It’s located here in Gaza’s industrial north-side. Mohammad Abu Shannab has run this plant since 1986 and once had 40 employees. But he says the 2007 war and Israel’s blockade has caused him to scale back production.

But five months ago he got a big order from Israel for religious hats worn by Orthodox Jews – he says he’s doing his best to fill the order.

“There needs to be more ease of the border restrictions,” says Shannab. “Actually, we look forward to having daily movement of truckloads of our products, into Israel.”

A major problem is checkpoints, he says. But he’s optimistic that a northern border gate that recently opened for vehicles will be extended to commercial exports.

“Once these restrictions are eased, I hope to be able to hire new garment workers, hopefully in the next six months,” Shannab says.

Before 2007 – when Gaza began to feel the economic fallout from Israeli sanctions after Hamas took power – local garment output was 17 percent of the territory’s GDP.

“In March 2006, we had meetings with 16 Israeli companies,” Al-Ustaz recalls. “We signed contracts with six of them. My own company, Alustaz, was selling on the Israeli market.”

Alustaz is still Gaza’s largest garment firm and employs 90 workers making children’s clothes. But business is much slower. Part of the reason is stringent restriction on imports imposed by Israel.

Tamer Zowidi is a government official with Gaza’s Industry Ministry. He says it’s hard to get dyes and other raw materials because of rules limiting anything with a suspected military use.

“They have prevented entry of machines that manufacture leather, including dyes, under the pretext of dual use,” Zowidi explains. “Israel imposed a ban on sodium and some other concentrated substances, like chlorine.”

The result is that many of Gaza’s plants sit idle. Many garment workers only get a few shifts a month.

Back in downtown Gaza, Um Haytham Alhaddad has come shopping for her four children. She says she tries to buy local whenever she can rather than purchase imports.

“This year, we found some local products that were high quality – they were the same as international products,” says Alhaddad. “So it all depends, if we see good locally-produced products, we pick them up with confidence – why not?”

Gaza’s garment merchants have strong local demand as well as a lucrative Israeli export market. But access remains a problem. These days only 120 of 900 plants are running. Still, there’s hope that recent relaxation on exports will improve the economy, and in recent months 35 plants have begun filling orders for Israeli markets.

Getting the products out of the Gaza Strip will be slow. There used to be six commercial crossings – now there’s just one – making it very hard for Palestinians in Gaza to do business.