Gaza’s medical infrastructure on the verge of collapse 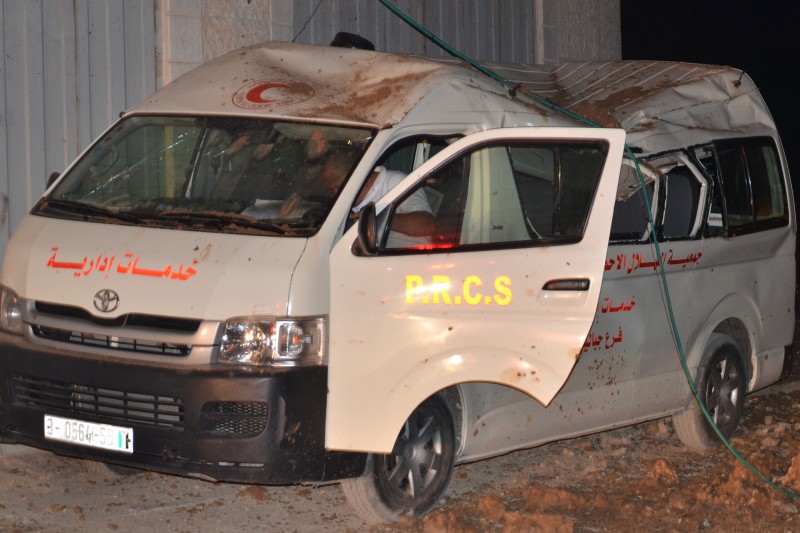 Fighting resumed between Israel and Hamas this week in the Gaza Strip.  Rocket fire and airstrikes early in the week were followed by targeted assassinations of Hamas leadership, including an attempt on military chief Mohammed Deif that killed his wife and infant son. And according to the Ma’an News Agency, in the past two days Hamas has executed as many as 18 people suspected of collaborating with Israel.

As Israeli airstrikes on Gaza continue, the effects of the past six weeks of shelling and bombing have left the coastal territory’s medical infrastructure in shambles. FSRN’s Rami Almeghari has more.

Maha Alsheikh Khalil from the Shija’ya neighborhood of Gaza City turned eight years-old this week while receiving medical care at Gaza’s Al Shifa hospital. She suffers from a neck fracture and doctors here say that she needs an urgent referral in order to receive better care outside of Gaza.

Maha’s uncle, Abdelmo’ez Alsheikh Khalil, along with his children and wife tried to cheer her up for her birthday, but Maha is in mourning. “Her family was taking shelter under the staircase of their home, per the instructions given to the population by the civil defense service,” he told FSRN. “The entrance of the staircase was hit, causing causalities. Seven members of her family were killed instantly, including her mother and her two other sisters. Her mother was pregnant.”

Maha’s father and brother were lightly injured in the same attack.

Also at the Shifa hospital, Mohammad Wahdan, a 3-year-old child from Beit Hanoun, is awaiting a referral to an outside hospital. He suffers from burns to his face and a fractured skull after an Israeli missile struck a house where his family had sought refuge in the northern town of Jabalya. They had fled their own home during the offensive.

Mona Wahdan is Mohammad’s aunt. She is now taking care of him and his other wounded brother, Omar. “My brother’s home in Beit Hanoun was shelled, so they had to move to my other brother’s home, which was also shelled,” she said. “Then they were forced to move to the area’s Abu Hussain school. The school was shelled as well, forcing them again to leave to seek shelter elsewhere. They spent four days in another home before three drone missiles hit it, killing his mother, his uncle, his cousin’s wife and her daughter and injuring his father, his two other brothers and himself.” Wahdan added that Mohammed’s father’s leg was amputated and he is now receiving treatment at a hospital in Cairo.

The Palestinian health ministry in Gaza says that Egypt, Jordan and Turkey are now treating a total of 450 people injured during the Israeli military offensive. Two hundred others are awaiting referral, including 40 children who are all currently laying on Gaza hospital beds.

Dr. Yehya Khadr, chief referral officer with the Gaza-based health ministry, says “Germany, Czech Republic, Austria and Spain have all offered treatment for the wounded, especially for the children. But for the time being, visa procedures are taking about two or three weeks. However the wounded, those needing urgent medical attention, cannot wait for two or three weeks.”

One of the hospitals destroyed in the offensive was the El Wafa hospital, Gaza’s only long-term rehabilitation center for the disabled.

Mustafa Albarghouthi is a West Bank-based key Palestinian political figure and head of the non-profit Medical Relief Committees. He has been in Gaza for the past two weeks. Albarghouthi notes that “because of the fact that for six weeks, the normal primary health care structure could not function and vaccination programs were not being conducted.” He adds the situation increases “the risk of infections and epidemics and it requires an enhancement of the provision normal care, as soon as possible, to people who have had postponed operations or postponed vaccination or postponed management of their health care and diseases.”

Operation Protective Shield has been the most destructive of the three Israeli offensives in Gaza in the last eight years. It has so far claimed the lives of more than 2000 Palestinians, most of them civilians, including hundreds of children. Another 10,000 were injured. As many as 2000 of them will require continued medical attention, according to Gaza-based health officials.