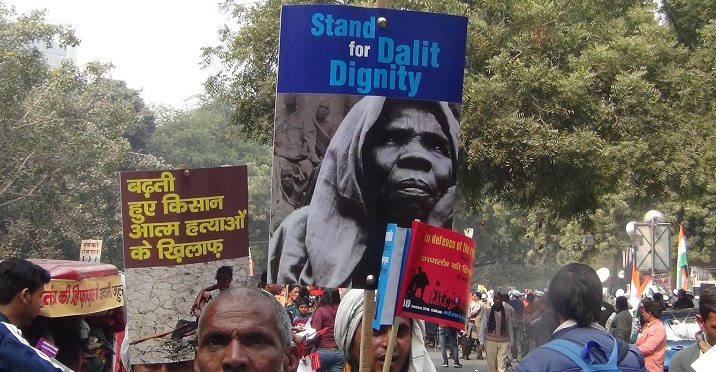 In India, attacks against members of the Dalit caste at the hands of Hindu extremists are on the rise. That’s led to protests across the country by Dalits who are now showing themselves more and more capable of standing up for their rights. FSRN’s Bismillah Geelani reports from New Delhi.

A peaceful sit-in protest by hundreds of Dalit students and teachers last Saturday was held in downtown New Delhi to protest recent attacks against their caste community. Without warning, men appeared swinging iron rods and batons to break up the sit-in. These men are not riot police, they are Hindu nationalists. The police are here too – dozens of them – but they just watch this one-sided fight as the Dalits are beaten.

Ratan Lal, a 40-year-old instructor at Delhi University and member of the Dalit caste. He says if Dalits can be assaulted in broad daylight in India’s capital – think how bad it is in villages.

“Attacks like this show their increasing frustration over the resistance the Dalits are now putting up,” Lal says. “They want to keep us enslaved like they did for centuries but this is the 21st century and it belongs to us. We are no longer going to accept this bondage.”

Indeed, last weekend’s protest in New Delhi is part of a larger campaign by the Dalit community to resist increasing attacks and marginalization within Indian society. Once known as untouchables, for centuries Dalits were considered to be on the lowest rung in the complex Hindu caste system. But increasingly, Dalits are no longer willing to wear that label. And an attack against one is seen as an attack on all.

Last month, members of a Hindu nationalist group called Gau Rakhsha Samiti – or Cow Protection Committee in English – posted video taken in Gujarat of a Dalit youth they’d captured, beaten and then dragged behind a car as they hurled abuse.

His crime? Skinning a dead cow with the intent to sell the hide. The video went viral with both Hindus and Dalits enraged by what they saw – but for different reasons.

Local Dalits then did something unprecedented: they trucked cattle carcasses to the city center and left them to rot at the steps of government offices – pointedly refusing to remove them.

Vimal Thorat of the National Campaign for Dalit Human Rights, explains that traditionally Dalits were given the work no one else wanted – like handling cow carcasses.

“This work that has been a source of our livelihood is not something that we chose for ourselves, it was thrust upon us by the caste system and it is because of this work that we are considered ‘untouchables,’” Thorat says.

Cow vigilante groups have mushroomed across India since the electoral triumph of the Hindu nationalist Bharatiya Janata Party in 2014. They see their work as sacred, but in practice they roll around villages and rough up livestock traders and herdsmen. They are feared, and for good reason, they have a reputation for their ability to inflict violence with impunity.

Vijay Bhardwaj heads a cow vigilante group in the central state of Uttar Pradesh. He says his men are doing the dirty work that the police can’t.

“It is government’s duty to punish people involved in cow smuggling but the government is doing nothing and cow smuggling is at its peak,” says Bhardwaj. “Hindu society has for long tolerated this but not anymore.”

Dalits may have felt they had to accept this but no longer. Their increased defiance and willing to fight back could be the start of a national awakening from India’s traditional underclass, says Vivek Kumar, a sociology professor at Centre for the Study of Social Systems in New Delhi.

“It speaks of a new understanding and realization on their part, that enough is enough and they are not going to tolerate this humiliation any more,” Kumar points out. “This is something that will have far reaching consequences for both the community and the future of India.”

But this is no ordinary cultural or religious clash. The cow vigilante groups have been implicated in the murder of seven Muslims this year and India has a long history of bloody inter-ethnic and religious strife.

So while the Indian government denies having any official ties to vigilante groups, the party does nothing to distance itself from the vigilantes which would offend its hardline Hindu base from which it draws much of its support.

That leaves the government’s silence in the wake of each attack to speak volumes on its true sympathies. But now, increasing numbers of Dalits are demonstrating that they are more than capable to speak up for themselves.