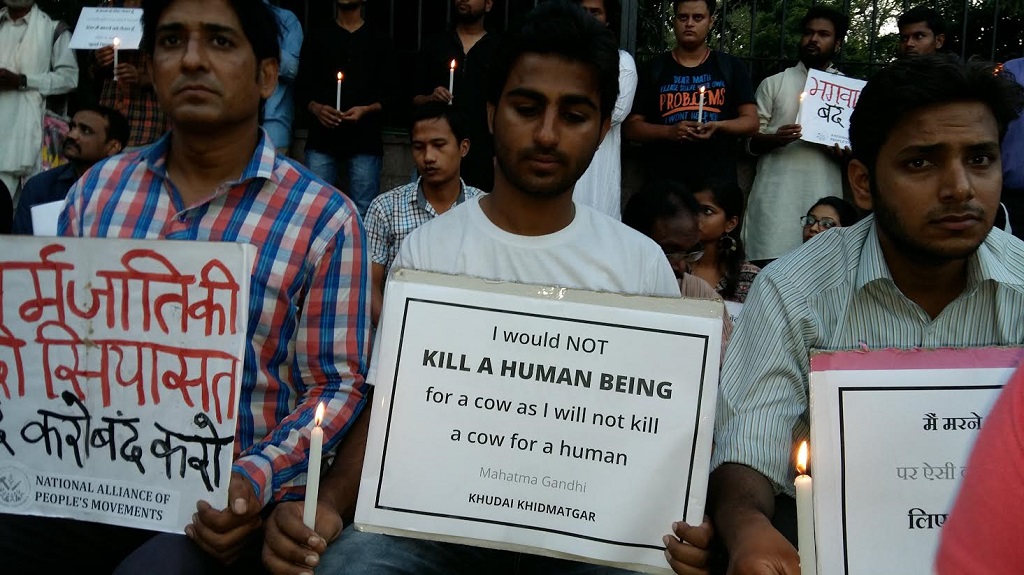 An uneasy calm prevails in India’s northern state of Uttar Pradesh where a Hindu mob lynched a Muslim man late last month following rumors of cow slaughter and beef eating. The killing sent shock waves across the country and demands are growing for swift and stern action against those involved.

As Bismillah Geelani reports, the incident has brought renewed focus on the rising trend of hate crimes against religious minorities and others which many trace to Hindu nationalist BJP’s coming to power last year with Narendra Modi as the Prime Minister. Before becoming India’s Prime Minister, Modi was Chief Minister of the Western state of Gujarat where anti-Muslim riots in 2002 left thousands dead. Many still hold him responsible for those killings.

Eighty-two-year-old Asghari Begum is inconsolable. Sitting at the front door of her mob-ravaged house in the Dadri district of Uttar Pradesh, tears roll down her wounded face as she recounts the events leading to the violent murder of her 50-year-old son, Akhlak.

“A bunch of people suddenly started beating our door; they were shouting, ‘Open the door, open the door,’ and hurling filthy abuses. We were just trying to understand the situation when some of them climbed the outer wall and barged in, others broke the main gate open,” Begum recalls. “First they ransacked the entire house, and then started beating us. Some of them went upstairs and attacked my son and grandson. I asked them what has happened, why they are doing all this?”

When the mob dragged the two men from the house, Begum’s 17-year-old granddaughter, Shaista, ran after them, begging that they let her father and her 20-year-old brother go. But her pleas fell on deaf ears.

“They carried batons, revolvers and swords,” Shaista remembers. “As they were dragging my father and brother I recognized many of them. They were all our neighbors.”

When police finally arrived, they transported Akhlak and his son to the hospital. The father was declared dead; his son is still battling for his life.

The attack came after an announcement was broadcast from the local Hindu temple, calling for people to assemble near the Muslim family’s house, because someone there had slaughtered a cow. Within minutes hundreds of villagers gathered and launched the attack.

In utter disbelief, Asghari Begum saw her world shattering and not a single neighbor coming to their rescue. She says theirs was a village that had always maintained communal harmony, even during the worst of times.

“Our family has lived here for generations. I was born and married in this village and we shared a very cordial relationship with our Hindu neighbors,” Begum explains. “We never had even an argument with our neighbors let alone harboring any ill will. We had no enemy here. We celebrated our festivals together, visited each other’s home frequently and shared our food.”

The killing sparked outrage across the country and became a rallying point for people concerned about growing attacks on religious minorities, human rights defenders and free speech advocates.

In recent months, there’s been a series of assaults on Muslims, Christians and Dalits in the country. Three liberal writers have been killed and human rights groups and activists are increasingly intimidated and harassed.

Many believe Hindu extremist groups are behind all these incidents and enjoy the tacit approval of the current Narendra Modi-led BJP government.

Social activist Shabnam Hashmi’s NGO Anhad is documenting the events. She says the figures point to an alarming trend: “The way these cases are happening, in quick succession and the manner in which the atmosphere is being vitiated – particularly with the help of non-state actors who appear to have been let loose to do whatever they wish and wherever, is extremely worrying. It’s not only about minorities it’s an assault on the country’s diversity and pluralism. It’s not that these things didn’t happen earlier, but we have recorded more than 1,000 cases in just one year and we see a meticulous planning in each case. It’s a multi-faceted attack targeting communities on the one hand by polarizing them and spreading hate and the intellectuals and institutions on the other. Everyone who disagrees with them is under attack.”

As a mark of protest, dozens of Indian writers and poets have returned literary awards they received from the government-funded National Academy of Letters. Noted Hindi poet Asohk Vajpayee is among them.

“An atmosphere is being created in the entire country where it appears that the minorities are no longer the citizens of this country,” says Vajpayee. “Writers are being humiliated and killed and no action is taken against those doing it. While all this is happening, our eloquent prime minister is completely silent. How can we remain silent? You are part of the crime about which you are silent.”

Back in Dadri district, police have arrested 10 people, including relatives of local BJP leaders, in connection with the mob violence that killed Akhlak. But there is a palpable sense of insecurity and uncertainty, especially among Muslim families. Many have already left their homes in the district; others like Sharifa Bibi are weighing their options.

“We have no existence and no dignity here. We can’t stay in this village any more,” Bibi says. “We have not been able to sleep since this incident. There’s no safety here now.”

Civic polls in Uttar Pradesh and Assembly Elections in the neighboring state of Bihar are underway. Voting is held in phases and many worry that as political parties continue to play the communal card and stoke divisions in order to consolidate their base, the hostility and unrest will only get worse.