More than 30 dead as protests escalate in Kashmir 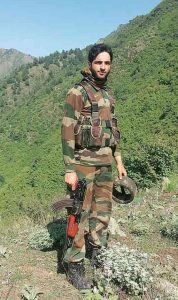 Intense street battles between Indian paramilitary forces and Kashmiri protesters continued across the Muslim majority region for the fourth consecutive day Tuesday. The protests broke out in response to the killing of a 22-year-old popular militant leader – Burhan Wani – and his two associates in a gunfight with Indian army troops.

Despite a valley wide curfew, tens of thousands of local residents participated in funeral services for the three militants. Shouting slogans against India, the angry protesters attacked police stations, army camps and government installations across the valley.

Naeem Akhtar, a minister in local government, says they are doing their best to bring the situation under control.

“The government is fully aware of its responsibilities and we are doing everything possible to ensure the safety of citizens. Government forces have been instructed to exercise maximum restraint and avoid collateral damage,” Akhtar explains. “We also appeal all the political forces in the state including the separatist leadership to support our efforts to protect people’s lives and restore peace.”

But the government’s claims of restraint are belied by the growing number of causalities on the ground.

Government forces have killed at least 31 protesters in clashes, and hundreds of others are wounded, including children.

“What we are witnessing right now is the worst kind of state terrorism. There are no crowd control mechanisms in place. They could have used non-lethal weapons but what we see is most of the people who have received bullet injuries have been shot either in the head or in the chest,” points out Umar Farooq, chairman of the All Parties Hurriyat Conference, or APHC, an alliance of more than a dozen separatist groups. He says government forces are not even allowing people access to medical aid.

As the crisis in Kashmir deepens, India has rushed more forces to the region to assist local authorities. The government has also shut down mobile and internet services in the territory.

Meanwhile, Pakistan has levied an official protest against India regarding the recent killings in Kashmir.  United Nations Secretary General Ban Ki Moon has also expressed concern about the situation and urged all parties to exercise maximum restraint.

Kashmir is a disputed territory between India and Pakistan, and has been since the partition of the Indian subcontinent in 1947. Nearly 100,000 people have been killed in the region since an armed uprising against Indian rule broke out in the late 1980s.