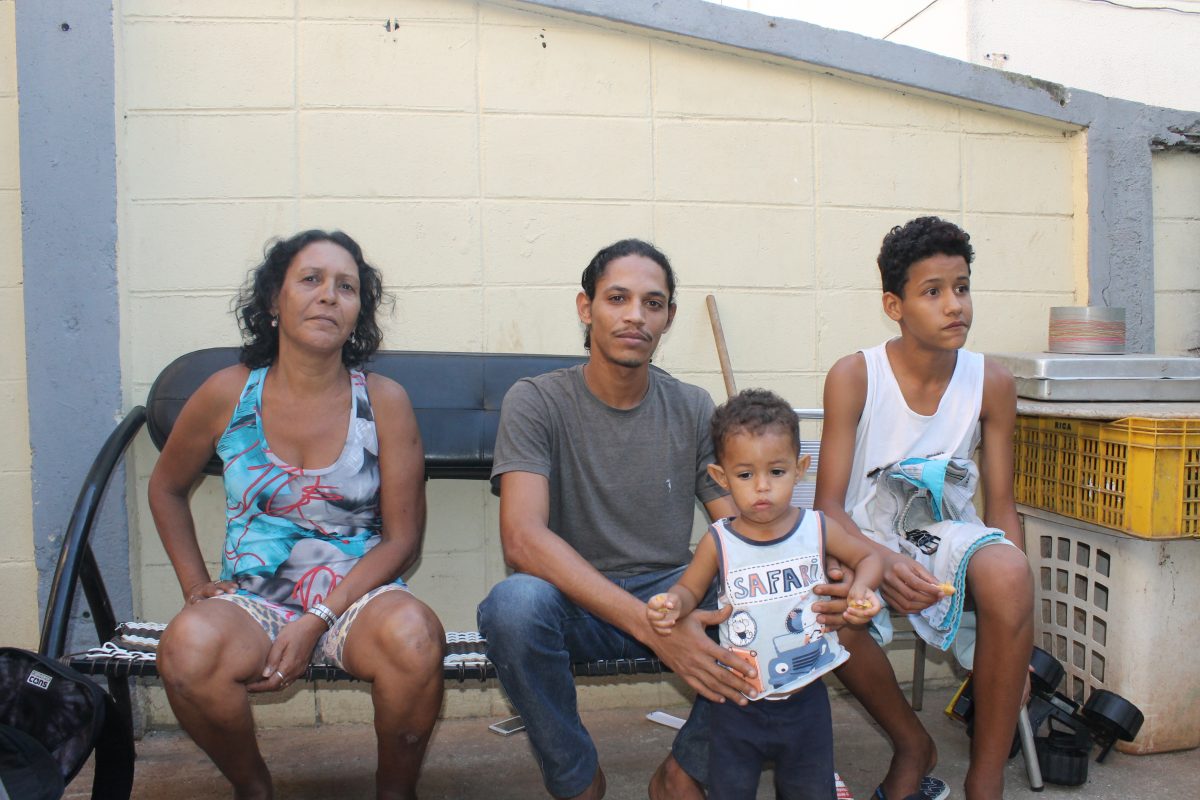 Sonia Braga says transit upgrades forced her to abandon her home, moving her family to the far outskirts of the city. (Photo credit: Sam Cowie)

The Olympic Games officially begin in Rio de Janiero and hundreds of thousands of tourists, athletes and officials are expected to descend on the city. Protesters held an anti-Olympics opening ceremony Thursday decrying forced evictions and state violence, in the run-up to the games. FRSN’s Sam Cowie reports.

As the Olympic Games begin, political uncertainty persists in the country. But for many residents of Rio de Janeiro, concerns are more basic, because they’ve been forced to move from the places they called home.

Sonia Braga was told she had to abandon her home, which was then destroyed to make way for a rapid bus transit line, considered one of the main legacies of the games.

She was relocated more than an hour away from her former home, miles along a rutted road and far from the city infrastructure. The new place is in an isolated area, where organized crime is prevalent.

Sonia, who suffers from high blood pressure, complains of long commutes now to visit her doctor and worries that should an urgent medical situation arise, emergency vehicles might not reach her.

“Here, if it’s your turn to die, you will die. It’s difficult for ambulances to get here. You have to go down to the main street to be picked up,” Braga said. “By the time you’ve gone there, you’ll die.”

Between 2009, when Brazil won its bid to host the Olympics, and 2015, according to official figures, more than 22,000 Rio families were forced to relocate and resettle elsewhere in the city.

The number or evictions directly or indirectly linked to the Olympics remains contested, with city hall claiming that just one favela – or shantytown – was removed to make way for the Olympic park: Vila Automodromo, once home to some 900 families.

But human rights groups say many more families were uprooted for projects that were either directly or indirectly to the Olympics – that more like 2,500 families were forced out.

Simone de Conceicao lived in an abandoned factory in the center of Rio, of around two dozen families with nowhere else to live. The building was razed as part of another so-called Olympic legacy project – the revitalization of the port area – that even includes a hotel developed by U.S. presidential candidate Donald Trump.

De Conceicao was relocated to a public housing block more than an hour from the city center.

“We have a good relationship with our neighbors who we know from the city center, but apart from that, there are no good things here,” says de Conceicao. “The school is really bad and there is no work.”

The housing situation however is not entirely black and white. Some families, arguably, have benefited from being placed in newly built public housing blocks. But human rights defenders and advocacy groups say this doesn’t justify the top-down evictions that have primarily benefited Rio’s real estate market.

Orlando Santos, Jr., a professor the Urban and Regional Planning Research Institute at Rio State University says that the first removals were brutal and that the conditions, including better compensation, only improved over time with resistance and media attention.

“Even if people were living in better houses, does this justify the violence of the state, to take people from their community?” Santos asks. “Does this justify a segregated model of urbanization? Where rich are separated from poor? Does it justify preventing people from deciding where to live?”

The Olympic Games in Rio de Janeiro will last just more than two weeks and will be followed by the Paralympic games. For those removed from their homes however, the legacy will be bitter, and last a lifetime.