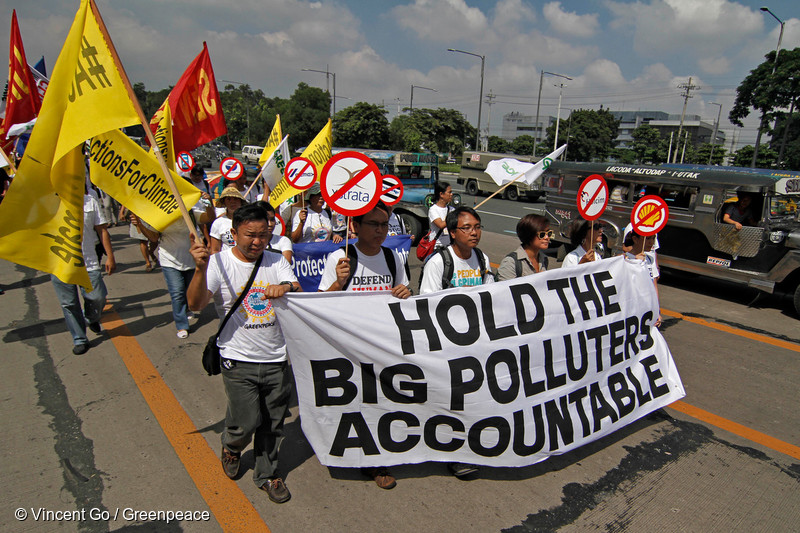 The Philippines’ Human Rights Commission has called for an investigation of 47 corporate carbon-producers plaintiffs say contribute to climate change. The unprecedented case will hear testimony from typhoon survivors as the commission considers the legal liability of polluters in the face of destructive weather and environmental degradation. FSRN’s Madonna Virola reports.

Veronica Cabe is a typhoon survivor and she’s not alone. The Philippines, with many low-lying areas, is among the world’s most frequented by extreme weather conditions like typhoons, severe floods and deadly heat waves.

Speaking on the phone from Bataan province, she relates how her family weathered Typhoon Ketsana in 2009.

“When we were hit by a typhoon some years back, we had to stay on our house’s roof for 24 hours. We had to stay at a friend’s house for two months. We had no job,” Cabe recalls. “We’re barely recovering now. We can’t forget the horror because we didn’t know how to swim- whether to first save our parents or children- as we watched all our properties, plants and animals being carried away by the floods.”

That’s why she’s signed on as a plaintiff in the Human Rights Commission’s landmark case she hopes will hold corporate fossil fuel producers to account. Defendants include global energy giants like Chevron, ExxonMobil, BP and Royal Dutch Shell.

“What if someone died, like what happened with the succeeding typhoons?” Cabe said. “It’s unacceptable that we just forget about that. Someone should be made accountable.”

Now Greenpeace has thrown its weight behind the effort.

“Obviously with everything that’s happening, it’s to hard not to see the inextricable link between climate change and human rights,” Greenpeace climate justice campaigner Anna Abad said. “Every after typhoon, the basic necessities are not available to the people – there’s no access to water, sanitation, to food. You are displaced, all these things are related to that.”

In its legal filings, Greenpeace cited a study by the Climate Accountability Institute in Colorado. It said industrial activity by corporations was responsible for nearly 22 percent of greenhouse gas emissions from 2010 to 2013. The study estimated that just 90 corporations were responsible for nearly two-thirds of all greenhouse gases from the beginning of the industrial revolution in the 19th century through 2013.

Until recently, Banuar Reuben Falcon was the lead attorney for the International Obligations and Monitoring Division of Commission on Human Rights. Although 47 corporate defendants were named in the suit, the commission can only compel the 10 companies that have branches in the Philippines to appear to answer the complaint.

“The purpose of asking them to submit their evidence is a matter of due process on the part of the Commission, to be able to give the carbon majors a chance to refute the contention of the petitioners,” Falcon told FSRN. “In this case, Greenpeace Asia and others, who submitted their own scientific evidence in support of their claim that the carbon majors are essentially in violation of certain human rights standards with respect to the right of people to healthy environment.”

Third-party witnesses are expected to offer expert testimony for both sides in a case that’s likely to be closely watched in countries around the world.

Even so, the commission is not a court of law, meaning its ultimate findings will be non-binding. But plaintiffs see this as an important first-step towards crafting stronger corporate accountability as the planet comes to grips with the realities of climate change.

A similar case in the Netherlands saw the high court order the Dutch government to take stronger action to protect its citizens from the effects of climate change. The landmark June ruling is on appeal.

In the meantime, Veronica Cabe – the typhoon survivor in Bataan province – says she hopes corporations will eventually be more mindful of the cause-and-effect between fossil fuels and natural disasters.

“The carbon producers should concretely prove that their business has a heart for the poor and care for their impact on the communities and the environment,” she said.

So far a handful of energy producers are reaping windfall profits that are ultimately subsidized with human lives.