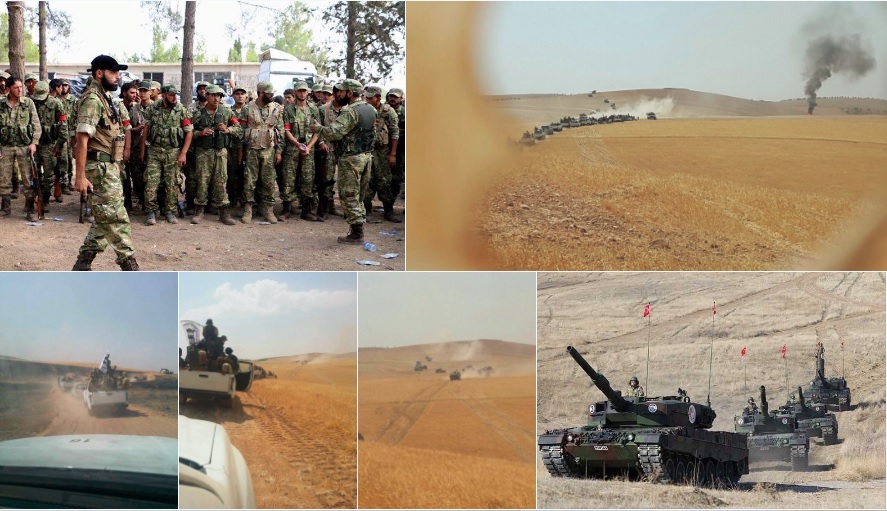 Turkish tanks and troops moved into Syria to capture the city of Jarablus Wednesday in its first ground offensive against the self-styled Islamic State. But the Turkish invasion will also deny Kurdish militia from consolidating its gains in northeastern Syria. FSRN’s Jacob Resneck explains.

Turkey’s offensive began at dawn Wednesday with airstrikes and regular artillery barges broadcast by the country’s state-run Anadolu news agency. Ankara says its aim is to push back the self-styled Islamic State which has been shelling Turkish border towns this week and is blamed for a string of bomb attacks.

The latest suicide bombing was last weekend in the Turkish city Gaziantep where at least 54 people were killed at a Kurdish wedding. By late afternoon, Turkish troops and allied Free Syrian Army fighters entered Jarablus, which has been under the control of ISIS since 2014.

Ankara says one FSA soldier was killed in the operation; there were no reported Turkish casualties.

Turkey is calling its operation Euphrates Shield. It’s an apt name as the primary goal is to keep Kurdish militia from making gains across the Euphrates River.

In recent weeks the Kurdish YPG militia – backed by U..S airstrikes and special-forces – drove ISIS out of the city of Manbij.

Washington saw that as a success, but the collaboration angered Turkey which views the YPG as an extension of the Kurdish insurgency it’s been battling since the 1980s.

In Ankara, Turkish Prime Minister Binali Yildirim criticized the U.S. for allying itself with Kurdish fighters it considers terrorists and said his country will never accept a Kurdish state carved from Syrian territory.

“Turkey will never accept a new Kurdish entity on the other side of its southern borders,” Yildirim said. “We see this as a substantial threat to our national security.”

It’s here that Turkey’s Euphrates Shield makes strategic sense. Kurdish forces were expected to capture Jarablus from ISIS in coming days. That would’ve allowed Kurds in Syria to link its two areas of control into a single entity.

But with Turkish soldiers and tanks now holding Jarablus, this will drive a wedge between the two Kurdish-held territories.

While in Ankara, Vice President Joe Biden said that Washington has told its Kurdish allies that they need to pull back from recent gains crossing over the Euphrates River if they wish to retain U.S. support.

“We have made it absolutely clear to the elements that were part of the Syrian Democratic Forces, the YPG that participated, that they must go back across the river,” said Biden. “They cannot, will not and under no circumstances get American support if they do not keep that commitment. Period.”

Now that Turkey has entered the ground war and invaded Syria, it could likely find itself fighting on multiple fronts: ISIS, Kurdish militia and even the Syrian government in Damascus, which denounced Turkey’s incursion as “aggression” and a “blatant violation” of Syria’s sovereignty.