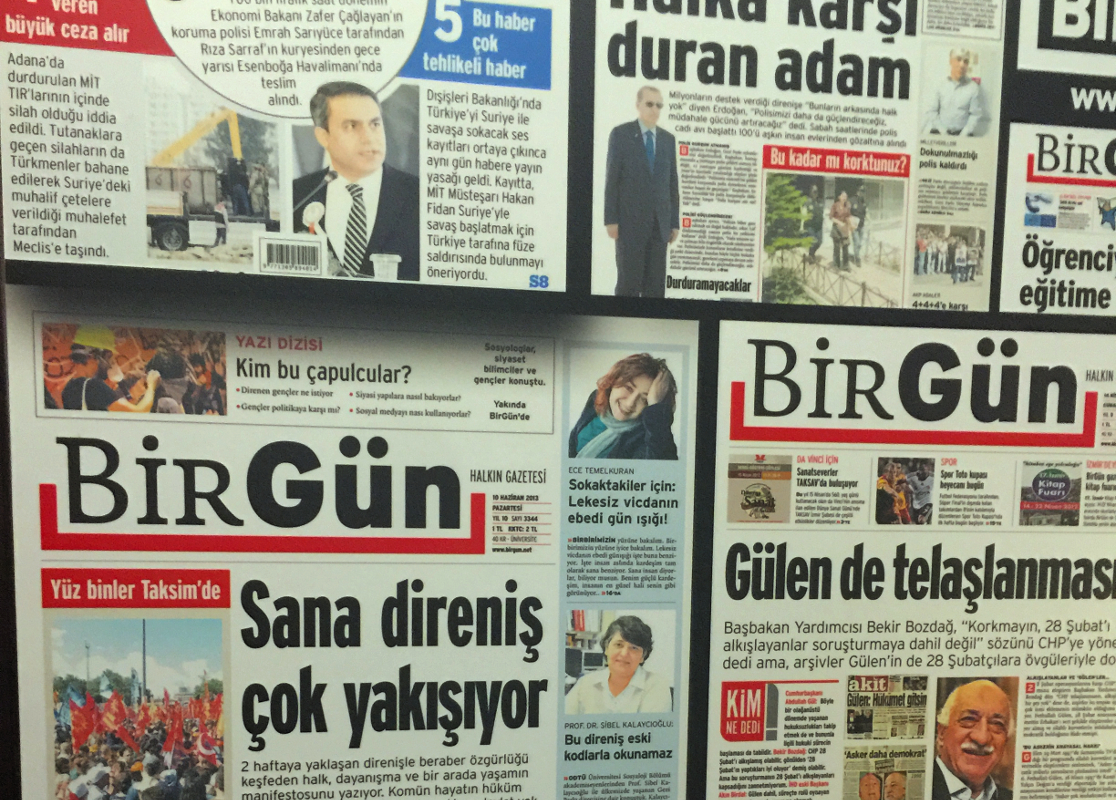 The Turkish government has slapped the leftist Birgun daily with a hundred cases of violations. The editors say they're just reporting the truth. (Photo credit: Fariba Nawa)

The EU-Turkey deal that aims to reduce the number of migrants arriving on Greek shores may be headed for collapse. As part of the complex deal, Turkey agreed to relax a tough anti-terror law that many say is used to stifle dissent in the country, and the EU would grant Turks visa-free travel in the 28-nation bloc. But now President Recep Tayyip Erdogan is refusing to update the law, and the EU has halted moves to implement the travel program.

The anti-terror law is but one used in the country to limit freedom of expression. A crackdown on speech intensified three years ago amid widespread anti-government protests. Now it’s getting worse, with more than 2,000 journalists detained and dragged into court for perceived slights against the Turkish president. Fariba Nawa reports.

“It was May 2015 that I noticed an interesting search result in Google autocomplete. When you type ‘hirsis and katil,’ in Turkish which means ‘thief and murderer’ in English, it brings Erdogan as the first suggestion in the Google autocomplete and the second suggestion was AKP, the government party,” Erem explains. “When I noticed this, I made a short news report about the situation. And because it was a very catchy thing, it was widespread. Then, as a result, I get a court case for insulting the president.”

The 28-year-old also published an interview with a British academic who called Davotuglu “a joker.” That cost him another court case under a long-dormant law the ruling AKP Party is using to prosecute critics of the government. That includes academics, activists, and even a few members of the foreign media.

Last week, a Turkish court sentenced a renowned columnist and his editor at the historic Cumhuriyiet newspaper to more than five years in prison on charges of exposing state secrets. The writer, Can Dundar, published an investigative article reporting that Turkish government trucks ostensibly filled with aid were actually loaded with arms and headed to rebel fighters in Syria.

Outside the courtroom, a man tried to shoot Dundar. The reporter escaped unharmed, but the bullets injured another journalist.

In March, the government seized a major opposition newspaper, Zaman, and has closed down numerous TV stations and other media outlets. Whenever a terrorist attack occurs in Turkey, censors ban most non-government broadcast outlets from airing the news. The AKP is even calling on European leaders to punish their citizens for insulting the Turkish president.

Political analysts in the country say it’s important to consider the historic context of the Turkish press, and it may be alarmist to call the crackdown on media the end of Turkish democracy.

“I would say that the middle class, the conservatives and the Islamists, have more newspapers, radio and television stations that function,” says Dursun.

Yet Dursun says she disagrees with the AKP’s aggressive tactics of seizures and arrests. She says the Turkish constitution needs to be rewritten to give the individual more power, not the state.

Nicole Pope, a scholar and former columnist for the seized Daily Zaman newspaper, is less optimistic. She says Turkey’s desire to join the European Union created an incentive to allow free press freedoms in the past, but with the recent EU-Turkey agreement on refugees, Turkey has gained the upper hand.

“The point is that they have this grand idea, that they don’t need the EU, it’s the EU needs Turkey more,” Pope says. “They know that the European Union is desperate right now.”

Pope has lived in and written about Turkey for 30 years. The Turkish press has rarely been neutral, Pope says.

“The concept of the independence of the media is very weak, and it was before the AKP party came to power and it will probably continue to be for a while to come. And it’s not just about politicians trying to censor news but there’s also, the whole system is, journalists themselves do not always have a concept of independence of the press or freedom of expression, freedom of the media,” explains Pope. “For a lot of people, the idea is that you serve a cause, for a lot of journalists, it’s serving the country.”

Hundreds of Turkish journalists are now unemployed, leaving the country or working as translators and fixers for foreign media. Journalism students like Uluc Akbas at Bigli University say they feel doom about their future in the press.

As Onur Erem awaits the May 24 start of his first trial, he works nine hours a day, six days a week doing a job he loves. He hopes he doesn’t have to go to jail or flee the country for it.