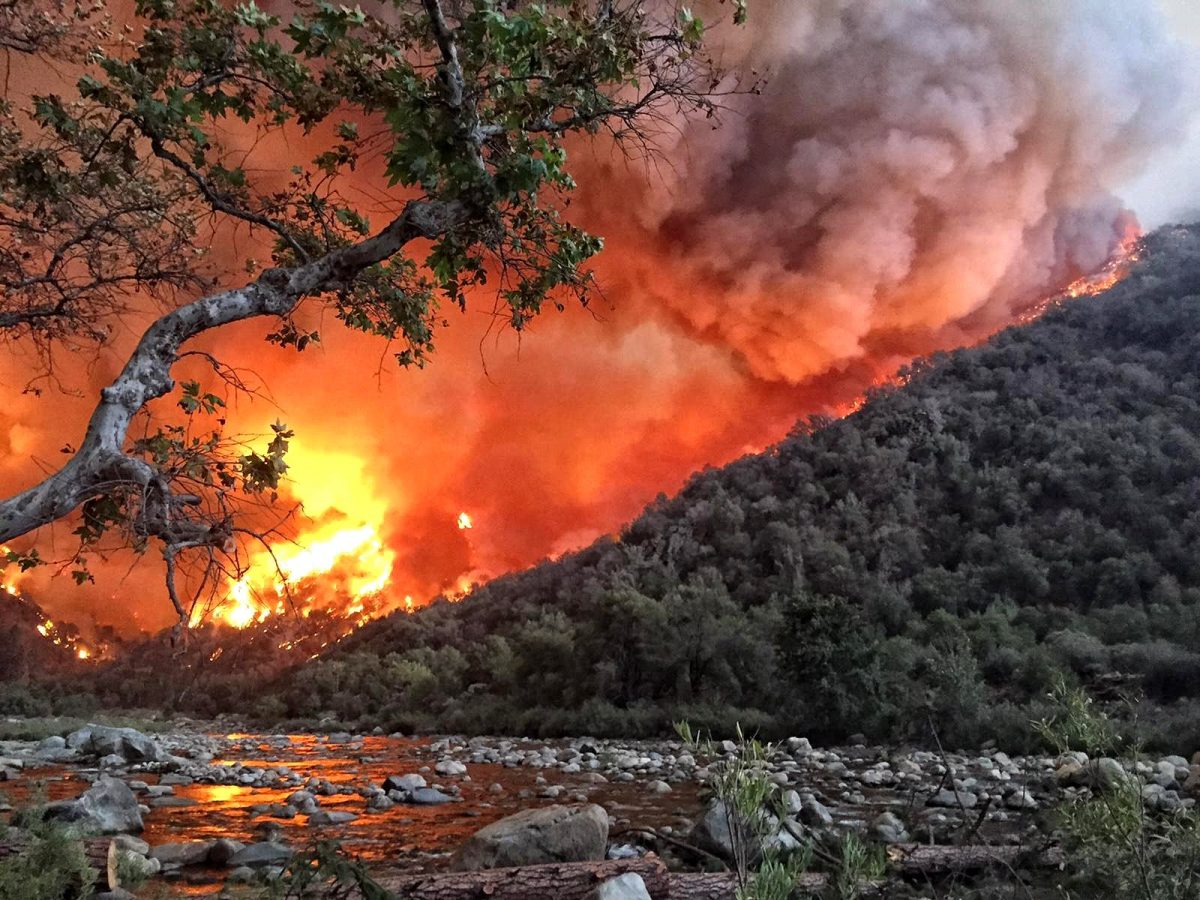 The ferocity of recent wildfires in California’s Sierra Nevada mountain range has been alarming as drought, infestation and the effects of climate change conspire to threaten the survival of some of the West Coast’s most wild forestland. Sixty six million trees are already dead and it could be 100 million by the end of this year. And it’s not just the trees that will suffer. FSRN’s Vic Bedoian takes a closer look why.

Riding in his pickup truck near Shaver Lake, Jem Bluestein reflects how this mountainous landscape is changing. Bluestein manages a 134-acre tract owned by the Sierra Music and Arts Institute. He says it once was some of the healthiest ponderosa and sugar pine forest around.

But now, Bluestein says, “We are experiencing cataclysmic changes and they’re accelerating, because there’s so many effects and causes that we aren’t even clued into, which are already in effect.”

Bluestein and his crews have been working for years to remove the hazardous buildup of dead wood and undergrowth that could fuel the next wildfire. Commercial timber interests say one solution is more widespread logging.

Bluestein disagrees, saying, “Number one, we should not, in fact, be cutting any healthy, maturing timber. Number two, we should, in most of these out of control overgrown forests, we should be cutting most of what is ten inches in diameter and smaller. Most of the brush, most of the thicket.”

By this method, Bluestein argues, we’re left with sparser forest. That in turn allows more water for trees that are left to grow healthier, and also more water soaks into the ground feeding the state’s rivers, streams and aquifers.

Carolyn Ballard, a US Forest Service’s fire management officer, tracks the volume of dead wood building up in the High Sierras. “Four hundred thousand acres of dead trees on the Sierra National Forest alone,” Ballard noted. “There’s a lot of ground. That’s about a third of our forest, that’s about half of the conifer base.”

Ballard attributes much of this dry, combustible dead wood to the work of pine bark beetles. Drought conditions have weakened conifers, making them prime habitat for the tiny pests to lay waste to the Sierra’s Ponderosa and Sugar Pine. It gets worse: Ballard says these pine bark beetle now have company.

It’s not just about the trees. This mountain range is one of the primary sources of water and hydropower for California’s population and farmland. And the vegetation, and the soil itself, capture carbon in the atmosphere to mitigate against climate change

The good news is that California’s water users are beginning to recognize how vital these forests are for the state’s health. “The association of California Water Agencies over two years ago passed a board resolution pointing out the need for watershed restoration and maintaining our headwaters as part of the water infrastructure,” said Roger Bales, director of the Sierra Nevada Research Institute at the University of California, Merced.

This summer, state lawmakers began touring the Shaver Lake area to view the devastation with promises of more action from state government.

“The upside of an emergency is that you learn what you can do when your focus is on the emergency and on fundamental priorities and you see that it happens,” state Assemblyman Jim Patterson (R-Fresno) said. “And we learned a lot, I think, over the past 40, 50 years.”

Then there’s climate change. Average temperatures in the High Sierras have risen by 5 degrees over the past 20 years.

California Governor Jerry Brown had already allocated $30 million this year to remove dead trees threatening critical infrastructure like roads, power lines, homes and public spaces. But forestry manager Carolyn Ballard says that does nothing toward addressing the underlying problems or restoring the health of forests.

“We need to move forward into looking at reforestation,” Ballard said. “And we need to look into resiliency treatments in terms of what kind of forest or what kind of landscape we want to have in say 5 years, 10 years, 20 years.”

From behind the wheel of his Toyota pickup, Bluestein says small crews could be deployed to get to work to suppress fire hazards without doing more damage to the eco-system.

“Thousands of small crews would be moved into the forest, like right away. And they would have chain saws, they would have chippers,” Bluestein said. “That way the materials that we cut and thin, we can clean it up as we go, get that carbon low where it can help to keep moisture and nutrients and microbial action on the forest.”

But with state funds for forest conservation scarce it would likely be up to the federal government to step in. Scientists, forestry managers and others that know these woods are trying to convince decision makers from state capitals to Capitol Hill that the need for action is now – before it’s too late.