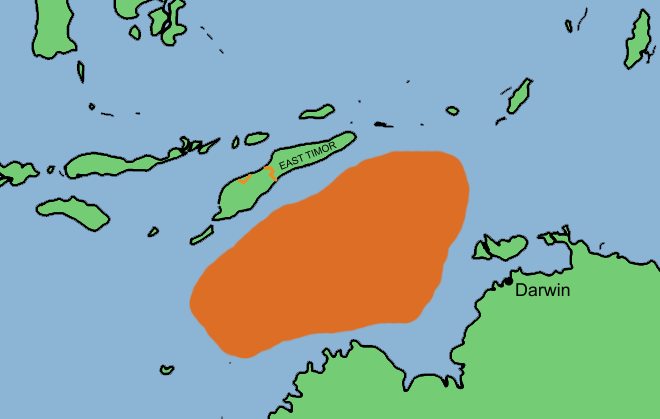 A map of the Timor Gap between East Timor and Australia. (Photo credit: Glen Dillon via Wikimedia / Creative Commons)

A landmark case which could see a resolution to a fourteen year maritime dispute between Timor Leste and Australia is now before The Hague’s Permanent Court of Arbitration. Tension has heightened between the countries, as former president, Xanana Gusmão, speaking outside the conciliation, says he will not back down until his country has full sovereign rights over the disputed oil-rich area in the Timor Sea. Georgia Clark reports from Sydney, Australia.

Under the center of the Timor Sea, between the North West of Australia and Timor Leste rests an estimated US$40 billion worth of oil and gas. The area, known as Greater Sunrise, is at the heart of a maritime boundary dispute between the two countries.

Timor Leste, otherwise known as East Timor, took Australia to international conciliation in The Hague last week for a first-of-its-kind conciliation hearing. The Timorese argue that a 2006 treaty should be scrapped in light of revelations that Australia spied on Timorese cabinet rooms during negotiations.

“Timor Leste wants a bigger share, but what they say is we are now a sovereign nation and we want sovereign maritime boundaries and borders,” explains Rodney Lewis, a Sydney-based attorney and human rights advocate.

In 2012, then Prime Minister of Timor Leste Xanana Gusmao discovered that Australian intelligence eavesdropped on confidential conversations during negotiations for a treaty signed in 2006.

“The offices of the cabinet in East Timor in Dili were bugged by ASIS, the Australian Securities Intelligence Service,” says Richard Broinowski, president of the Australian Institute of International Affairs. “When, under the guise of aid workers, they went in to construct the cabinet offices and they bugged the walls…that was a black mark for Australia.”

Australia argued in last week’s hearing that the Conciliation Commission does not have jurisdiction over the dispute, claiming that in the 2006 treaty, both parties agreed to a 50/50 split on profits from the reserves and to pause maritime boundary discussions for 50 years.

In a statement to FSRN, a spokesperson for the Australian Department of Foreign Affairs and Trade wrote that Timor Leste should abide by those treaty obligations.

“Timor Leste is arguing it has a right to pursue its maritime border,” Gutteras says.

“What bearing did the bugging in 2006 have on the decision of Timor Leste to take Australia to arbitration?” FSRN asks.

“Well in a sense, Timor Leste felt betrayed in a way that the negotiation for those temporary arrangements was not done in good faith, and so under the treaty laws that becomes invalid,” replies Gutteras.

The oil and gas deposits in the Greater Sunrise are minuscule in comparison to Australia’s overall energy portfolio. But to tiny and impoverished Timor Leste, where oil and gas revenues fund 90 percent of the national budget, these reserves are hugely important.

The oil and gas in Greater Sunrise was discovered in 1974 – a year before Indonesia invaded Timorese territory.

Australia brokered a deal decades later, in 2003, in which it claimed 80 percent of the largest part of the Greater Sunrise deposits. Broinowski says Australia took advantage of what was then a new country with this disproportionate agreement.

“Here’s a desperately underdeveloped country of 900,000 people, 1 million people, very small, and the president and the cabinet want that money to develop the infrastructure of their country. That’s not greed, that’s perfectly acceptable and perfectly understandable,” Broinowski points out. “The other thing to say is that Australia is an immensely rich country, point one, why would we want 80 or 90 percent of this off take, that is greed on Australia’s part in my view.”

The Australian government argues it was only seeking to quickly clarify a longstanding maritime boundary issue. The disputed area was called the Timor Gap in a 1989 treaty with Indonesia, the then-occupying power in East Timor.

Sister Susan Connelly is with the Timor Sea Forum, an organization that supports East Timor’s campaign to determine its boundaries with Australia.

“Timor’s case is that it has been asking Australia for the last 14 years to sit down and to discuss the setting of an internationally recognized maritime boundary in the Timor Sea,” Connelly says. “Unfortunately, Australia has not come to the party and has been satisfied to commandeer Timor into signing various temporary resource agreements.”

The Court of Arbitration will decide on the matter within the year. Then, if the Conciliation Commission orders the two countries to negotiate a permanent maritime boundary, Broinowski says that the sights of both parties will remain fixed on the Greater Sunrise.

[Editor’s note: This story was clarified to reflect that the legal proceeding involved is ‘conciliation’ and to correct the date of oil and gas discovery in the disputed area.]