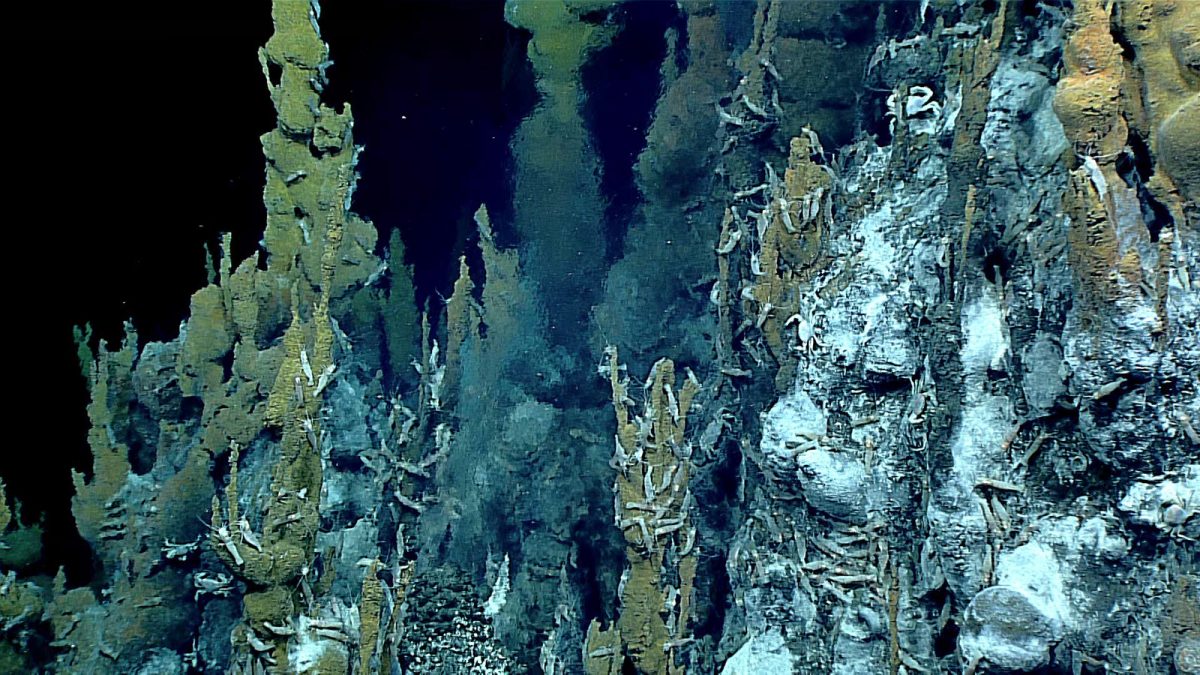 The deep seas are some of the most uncharted ecosystems in the world. Scientists say we know more about the surface of the moon than the deep seas. Yet the world’s first commercial deep sea mining operation for gold, copper and silver in the Bismarck Sea could be underway in just a year. But, as Georgia Clark reports, Papua New Guinea locals are considering a lawsuit, calling for greater transparency and fearing the project could cause irreversible damage to one of the world’s few pristine frontiers.

In the next hundred years, humankind is set to face ever more pressing environmental challenges. With climate change already taking hold, scientists say conservation is crucial. But economies with growing populations continue to depend on finite resources, like fossil fuels and minerals, pushing exploration for deposits into new frontiers. And that quest for resources has come to an underwater biosphere off the coast of Papua New Guinea’s New Ireland Province.

“These deep sea hydrothermal vents are some of the most remarkable biological communities ever discovered and they were only very recently discovered in the 1970s,” says marine biologist, professor Richard Steiner, who has been studying the area and the life it sustains. “The rarity of this ecosystem is extraordinary, it could be the most rare ecosystem type in the biosphere of this planet.”

Canadian mining company, Nautilus Minerals, has been developing a plan to extract high-grade deposits of copper, gold, zinc and silver on the seabed near the mineral-rich underwater Hydrothermal Vent Systems. According to their Environmental Impact Statement, remote-controlled seafloor mining devices would collect ore that will be sent to the surface for processing. Known as the Solwara 1 project, the 25-acre underwater site is slated to become the world’s first commercial seabed mine.

But the project has been under fire, with critics arguing that the environmental risks are too high and, more recently, calling on Nautilus to be more transparent.

“For the past four years the deep sea mining campaign and also communities in Papua New Guinea have been calling on the government and Nautilus to release documents around this project,” explains Natalie Lowrey, media coordinator at the Deep Sea Mining campaign. “If they don’t there could be a situation where communities there look at a legal challenge.”

Some Papua New Guinea locals have raised concerns about the government’s 15 percent stake in the project.

“The PNG government is so corrupt that it’s very difficult to monitor and regulate projects like this. Given the situation, it’s a stakeholder and therefore there is a conflict of interest and we don’t think it will carry out the responsibility of regulating and monitoring this project effectively,” says John Chitoa, a coordinator with Bismark Ramu, an NGO that represents Papuans opposed to the project. “To make matters worse, the conservation minister was formerly the mining minister; he was the one who licensed Nautilus.”

Chitoa says Indigenous communities in PNG also worry about how mining operations could disrupt longstanding cultural practices closely linked to the local environment: “The sea is their welfare, their livelihood – it’s the source of food. The people in New Island also use the sea for bathing, cooking. In the past people used to use sea as graveyard as well. In the west coast of New Island, they still practice shark calling.”

FSRN sent multiple interview requests to Nautilus Minerals over a three-week period. A company representative said Nautilus CEO Mike Johnston would be unavailable for comment until after the story’s publication.

In past statements, Nautilus Minerals has expressed confidence that cutting edge technology will allow the company to mine the seabed in an environmentally responsible way. But Professor Steiner, who conducted his own independent study into the proposed mine, says the project warrants extreme caution.

“Scientifically, there’s just too many unknowns about these deep sea vent communities, so we really can’t accurately predict what the impacts will be,” Steiner points out. “But we do know that they will be severe on a local scale and they could actually be severe and long lasting – there could be species extinctions caused just on this 11 hectare site.”

While some environmentalists argue there is insufficient conclusive evidence to give the world’s first commercial deep sea mine the green light, Nautilus argues the benefits of deep sea mines outweigh those of terrestrial mines.

“I think that the one thing Nautilus has done well is that they’ve been very good about collecting scientific information. They’ve been very open about what they’ve found in terms of the biodiversity,” says Professor Elaine Baker, an expert in the sustainable use of marine resources at the University of Sydney. “They’ve have engaged top scientists from around the world to do the environmental impact study, and they’ve taken note of criticism – they’ve actually really progressed the science and our understanding of these organisms by the number of studies that they’ve done.”

Copper density in the Solwara deposit is reputedly several times higher than what is typical in terrestrial mines. It’s copper that Nautilus says will help meet worldwide demand for goods like smartphones and computers. Natalie Lowrey of the Deep Sea Mining campaign says consumers need to consider costs behind the price tag.

“Solwara 1 is gold and copper. We don’t really need any more gold – 80 percent of gold is used for jewelry, it’s not a necessity. Copper, yes, I can understand, copper is used in a lot of things, but these are things that could be recycled,” Lowrey points out. “We could really look at it like the idea of urban mining in the economy is actually cradle to cradle, so actually the way we design our products in the first place that they can last longer but also we’re able to extract the minerals and metals from there in the best way possible.”

While Nautilus has outlined mitigation strategies, such as transplanting sea animals in the path of the mines, with the integrity of their sea life and cultural practices at stake, locals say court action is foreseeable. With operations set to commence in 2018, the clock is ticking.