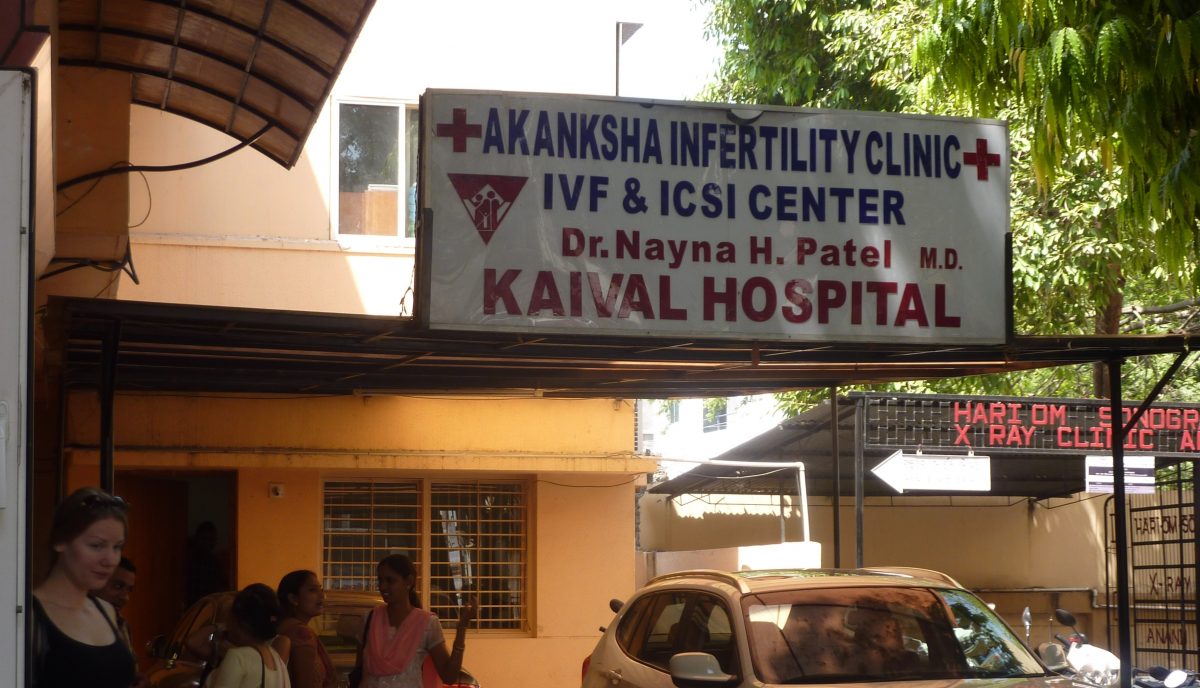 An infertility clinic and hostel for surrogates in India. (Photo credit: Jasvinder Sehgal)

India’s cabinet has unveiled a draft law which would ban commercial surrogacy. Estimates put the value of the practice in the country known as the “surrogacy hub” of the world at $2 billion. The legislation seeks to ban people who do not hold an Indian passport, as well as Indian single parents and gay people, from having children through surrogacy. Many have criticized the proposed law, saying that it could lead to an illegal industry and will take away the rights of women. FSRN’s Jasvinder Sehgal reports.

Thirty-four-year-old Salma Khan is among the 85 pregnant women living in this hostel – popularly called “The House of Surrogates.” The temporary residence is located in the small town of Anand, in the western state of Gujarat, which has become the country’s surrogacy capital.

Khan explains why she chose to become a surrogate, and says if the proposed law is enacted, it would add to her poverty.

“My husband had to take out major loans to open a shop. I opted for surrogacy so we could make the payments,” says Khan. “I don’t have any money, today. I have two children, my daughter is 13 years and my son is 12-years-old.”

Salma has met the couple whose babies she is carrying once, and she’s due to deliver twins in early October. They will join what some estimates say are more than 40,000 babies born through surrogacy in India in the last decade.

“The parents of these children are Americans who live in Dubai. They are Christians. They will come next month to take the children,” explains Khan. “They were married 17 years ago but didn’t have any children. I am carrying twins and will be paid US$6,200 for the first child and an additional $1,400 for the second child.”

Hopeful parents from around the world faced with infertility or other roadblocks to conception flock to India where until now, surrogacy is legal and relatively inexpensive.

But if passed, India’s new law would have major repercussions for poor women like Salma, who earn money by carrying other people’s children to term to help cover their basic necessities.

Poverty is a major issue in India, where at least 270 million people live on little more than $1 a day, and many demographers say the number is actually much higher.

Opponents of the bill say if surrogacy is outlawed, a black market will surely emerge where middle-men would reap the financial benefits and women would lose both income and access to adequate prenatal care.

Dr. Nayna Patel owns the surrogate house and the infertility clinic adjoining it. She has delivered more than one thousand babies through hired surrogates.

“The compensation which poor young mothers are getting through surrogacy will stop due to the new law. Only close relatives of couples seeking children will be allowed to be surrogate mothers, as per new law,” Patel points out. “Unlike organ donation, which can be done by father, mother or brother, lending of the womb can only be done by a young woman.”

But the government says that the new law is aimed at curbing unethical practices in the country that has emerged as a primary venue for commercial surrogacy worldwide.

Sushma Swaraj, India’s foreign minister, drafted the proposed bill and presided over a panel that examined the legal and ethical issues involved in commercial surrogacy.

“As per an estimate, over two thousand surrogacy clinics are functioning in the country where the womb of poor women is being misused by the childless couples,” says Swaraj. “It was a matter of great worry because there were instances where a girl or disabled child has been abandoned soon after birth. The facility of surrogacy has converted into a business.”

The draft bill proposes a complete prohibition on commercial surrogacy in India. It would allow only legally wedded, Indian couples married for at least five years to have children through surrogacy, and only using close relatives – no single parents, no gay couples.

Children born through surrogacy would be granted the same rights as any other biological or adopted child of the woman who carries the pregnancy. And violations could be punished by up to ten years in jail and $15 thousand in fines.

“There can be laws, but banning is not the solution. There was a need of regulating the practice of surrogacy,” says Neeru Sareen, one of many women’s rights advocates who are demanding amendments to the bill. “The government could have fixed the prices of hiring wombs and other conditions could have been laid.”

While Indian society tends to look askance at the basic concept of surrogacy, the business is still on the rise. But that may soon change, as the 2016 surrogacy bill will be presented to the Indian Parliament for approval in November. What form it will take by then, remains to be seen.