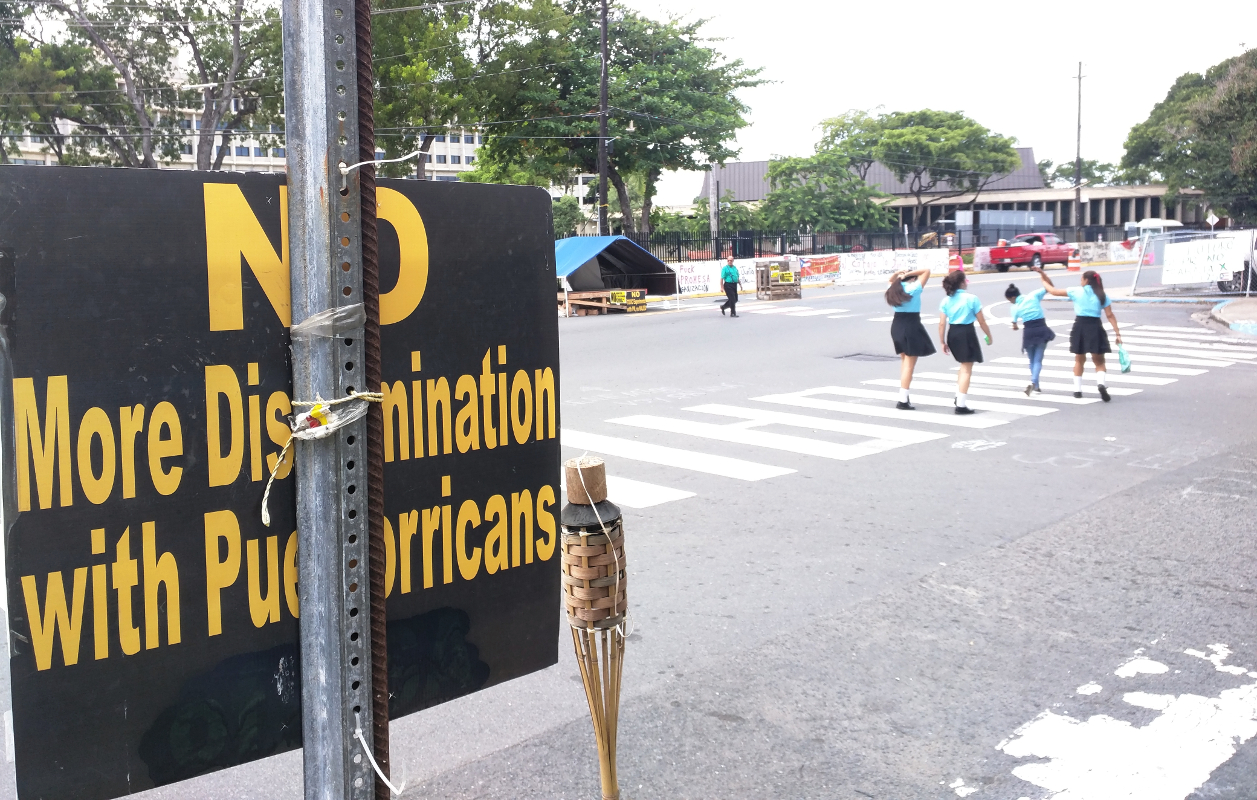 Schoolgirls walk past an encampment against the Junta in front of Puerto Rico's federal courthouse. (Photo credit: Ezequiel Rodriguez Andino)

After a long wait for Puerto Rico, the White House has named an emergency management board to take over the territory’s finances with the stated aim of ending its debt crisis. Amid Puerto Rico’s electoral campaign season, protesters say the seven appointed officials who will now decide the fate of public spending and related services will wield more power than elected representatives. From San Juan, Ezequiel Rodriguez Andino reports.

A substantial crowd gathered outside of San Juan’s landmark Condado Plaza Hotel Wednesday to disrupt a conference of bondholders and business interests set to discuss how the Puerto Rico Oversight, Management and Economic Stability Act – or PROMESA – will affect government and business in Puerto Rico.

Proponents of this recently passed law herald PROMESA as a road map out of debt for the USA-incorporated territory of Puerto Rico. Its seven-member board, named this week by President Barack Obama, has the authority to decide how the territory will spend its money while prioritizing debt payments to creditors.

Manuel Cidre, one of two independent candidates running for the governorship this year, told attendees at a forum organized by Puerto Rico’s oldest press guild that he is willing to work with the Oversight Board, referred to by many here as “La Junta.”

Cidre said PROMESA gives the government an opportunity to change the way it works and claimed, if elected, his business experience would allow him to anticipate board actions and preemptively avoid massive public sector layoffs.

“It is important that we all understand that the language of the Oversight Board is money,” Cidre says, “Romantic language will not work with them because they are not romantic.”

But Cidre, or whoever wins the gubernatorial election, may not have much say in the matter anyway.

The PROMESA board is akin to the emergency management system that took over Detroit and Flint – unelected officials with legal authority to slash budgets and override local representatives.

That’s what brought protesters – particularly pro-independence groups – to the streets this week. The appointment of La Junta reminds many of the long-standing civil government of the last century in which the Governor, the Senate and the Chief of Justice were all handpicked by the President of the United States.

Political Science professor Manuel S. Almeida says the oversight board itself is undemocratic and stacked with neoliberal crony capitalists to placate the municipal bond markets.

“It is no coincidence that the people who are celebrating the composition of this board today are those who represent the bondholders,” Almeida points out. “Sure, because they see the members and know that all of them have always favored preferential treatment of bondholders over citizens. The board is not only anti-democratic, but also it is not representative of the Puerto Rican people.”

One of the board members, Andrew Biggs, is an avowed opponent of the Social Security system. Another, Carlos García, was the president and CEO of the island’s Government Development Bank during the Luis Fortuño Administration when most of the recent volatile debt was acquired.

The Junta is expected to make deep cuts to social welfare programs, slash the budgets of the public education and transit systems, and possibly reach into programs previously thought of as off-limits. All the while, Puerto Ricans will continue to pay state taxes at one of the highest rates in the U.S. and its territories, in addition to federal income taxes.

Taxation without representation is a feeling Mariana Nogales is more than familiar with. She’s running as resident commissioner, the non-voting member of the House that represents Puerto Rico’s only presence in the United States Congress. She’s also a vocal critic of PROMESA.

“We have two options: we either stay here without health care, without education, without jobs, without food, or we go to the U.S. where there is no guarantee of personal success,” Nogales explains. “We have to fight this, stop the recolonization of this country.”

In Puerto Rico, 24 percent of households are led by single mothers, many of whom have participated in anti-PROMESA rallies.

Daritcia Pagán is one of them. In her San Juan-area apartment, she makes artisan ice cream for a living while homeschooling her two daughters. She’s been involved in community groups since the housing crisis hit Puerto Rico back in 2007 and is very active on social media speaking against PROMESA.

“The truth is, Puerto Rico has always been in crisis. People tend to think that we deserve the Board, and I think we do deserve a lot of things, but not because we are ‘dumb.’ We deserve it because we are still a colony and this is the colonial path,” Pagán says. “That doesn’t mean the situation doesn’t scare me. I have two daughters and I don’t want to leave Puerto Rico, and it’s not about patriotism or nationalism. I simply live here and this piece of land has so much potential. But we have been convinced that we are not worthy and without them we are nothing.”

The Puerto Rican government has already disbursed $6 million for operational expenses since PROMESA was passed just two months ago, and so far La Junta’s first meeting has not been scheduled.