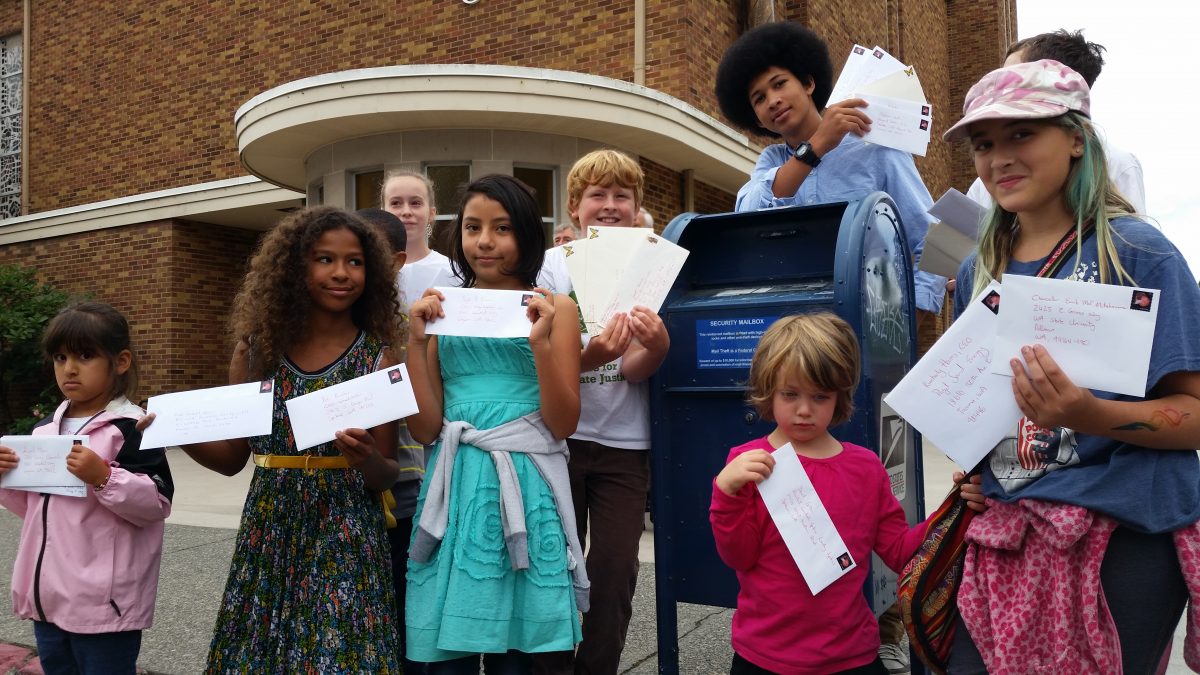 A group of youth plaintiffs in Washington state are bringing their fight for a stable climate system – which they argue is a constitutional right and as inalienable as any right conceived by the founding fathers – to a new level. They’ve gone to the courts, met with the governor and lobbied the state’s Department of Ecology. Their latest strategy is unveiling proposed climate legislation, which they argue needs to be based on the “best available climate science.” Martha Baskin reports from Seattle.

The youth thought they’d secured a victory when a King County Superior Court in Seattle ruled in their favor this spring. The court directed the state Department of Ecology to issue new rules regulating greenhouse gas emissions by the end of the year.

Ecology issued an updated rule this summer, its first since 2008, but it falls far short of what the kids and their lawyer say is required to stave off catastrophic climate change.

“We have the laws on the books that say we need to protect air quality for present and future generations. We have a court order directing them to do so,” says Andrea Rodgers, a lawyer with the Western Environmental Law Center. “And what we don’t have is action that’s based on science.”

Ecology is revising the rule after the public and Governor Jay Inslee weighed in, and plan to present it to the legislature by the end of the year. But the youth and their lawyers aren’t willing to wait and see what the revised ruling, the Clean Air Rule, mandates. So they announced at a press conference that they’d written their own legislation.

“While we’re pleased that Ecology used their authority to regulate carbon dioxide emissions, the rule doesn’t get us even close to where we need to go,” Rodgers explains.

The legislation, which was presented to both Ecology and Governor Jay Inslee in early September, is based on recommendations eminent climate scientist James Hansen and his team calibrated for the state. It calls for an immediate eight percent reduction in annual emissions as a starting point from which to cut further over the coming decades. The state’s revised Clean Air Rule calls for a much smaller cut of 1.7 percent. Hansen says governments worldwide continue to permit and otherwise support industry’s efforts to fully exploit reserves of fossil fuels – something he calls “at-best schizophrenic, if not suicidal.”

Sixteen-year-old Aji Piper, a youth plaintiff in the case, spoke at the press conference to announce the new legislation. “I know we’re asking for the moon. But hey, JFK asked for the moon and he got it, so why can’t we children ask for the moon?” Going to the moon was optional back then, Piper told the crowd, “Our rights and obligations are not.”

The idea that children – or anyone – have a right to a stable climate system, says environmental law scholar, Mary Wood of the University of Oregon, is a fundamental one and goes back to the public trust doctrine whose roots come from early Roman law. The doctrine states that the public has property rights to natural resources – water, land, shorelines and even the atmosphere.

Wood spoke with FSRN after the youth court case in Washington was heard late last year, saying, “And this has been interpreted as a constitutional principle with constitutional implications in the sense that it holds even legislatures accountable and certainly agencies accountable, like the Department of Ecology.”

The atmosphere, she emphasizes, is a public trust asset, which means government is a trustee and as such has a fiduciary obligation to protect it: “So it’s really a very simple construct. As much as the agency and government attorneys and certainly industry want to complicate the matter at some fundamental level there’s no complicating this right.”

But even in a state like Washington that touts its green credentials, acting on this public trust doctrine and James Hansen’s recommendations is open to interpretation.

Chris Davis, Governor Inslee’s Adviser for Energy and Carbon Markets, contends that the need to reduce carbon by eight percent a year or 10 percent by 2020 is a global target. “There is very little at all science that I’ve seen explains how a small jurisdiction should downscale that data and decide what they’re responsible for.”

Davis contends that after last year’s Paris climate talks, jurisdictions are trying to figure out how to set their limits. At the same time, he says the state has taken notice of California’s new climate change law, which has a target of reducing emissions 40 percent below 1990 levels by 2030.

Aji Piper isn’t wasting time any time waiting for action. He and others are using another tactic to influence the outcome of their court case and Clean Air Rule: mailing letters to the CEO’s of prominent corporations with a heavy carbon footprint in the state along with those who have verbalized support for annual carbon reductions of 1.7 percent, which include BP, Chevron and Shell. Piper also wrote a letter to the CEO of Puget Sound Energy, who generate about one-fifth of their energy from a coal fired power plant in Montana.

“Do you know what climate change is? Do you really know what climate change is? Ask yourself this question.” Addressing the crowd at the press conference, Piper added that it was generally accepted that with great power comes great responsibility. “It is also accepted that knowledge is power. So if you have knowledge, I ask you to take responsibility by reducing your business’s carbon dioxide emissions by eight to 10 percent every year.”

Thanks to Ed Mays for video clips used in this story.