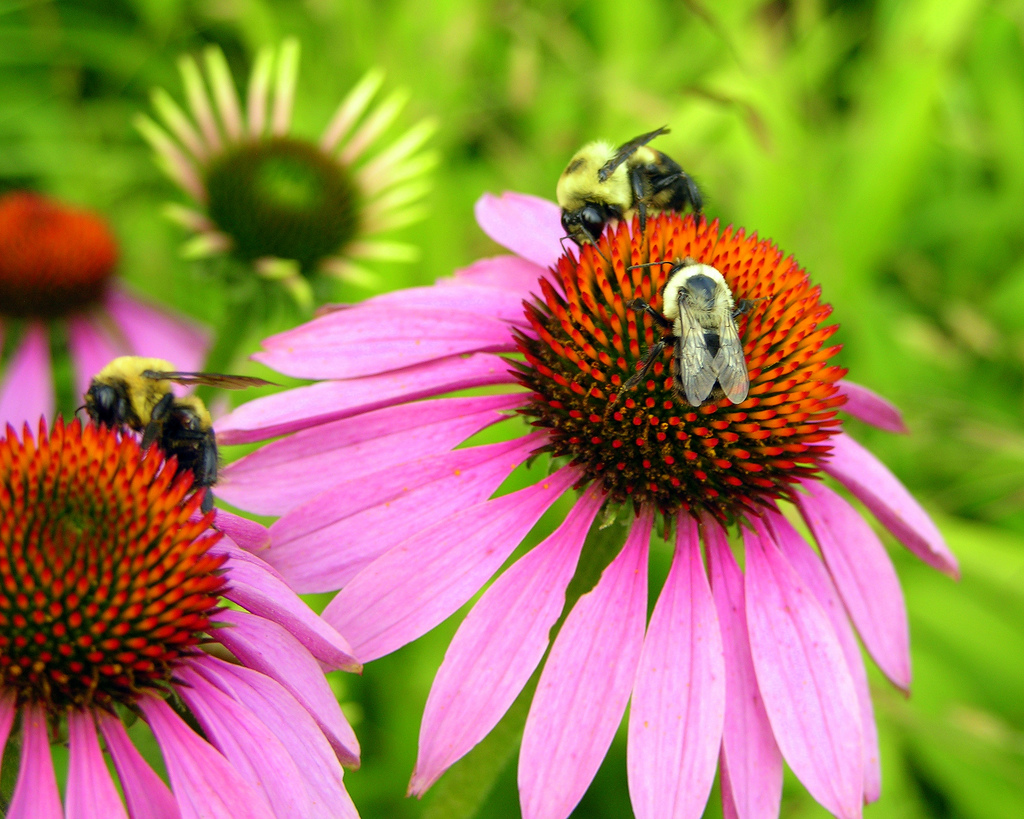 Bee populations have been in decline for some time, and now beekeepers in the southeast U.S. say they are losing millions of bees as municipalities conduct aerial spray operations of insecticides in a battle against the Zika virus. Honeybees contribute to one-third of all the food we eat. The fruits, nuts and vegetables we rely on for our food sources are all pollinated by bees. In fact, the winged insects pollinate 70 out of the top 100 human food crops.

Steep declines – and even outright collapse – in bee colonies has sparked action by citizens, companies and community groups across North America, like in Toronto where some have started taking it upon themselves to support and nurture urban bee populations. Tanya Castle reports from Toronto.

Wearing white coveralls and a black mesh hood, Melanie Coates smokes one of her beehives so she can open it. For more than eight years, she has cared for honeybees atop the roof of Toronto’s most iconic hotel: The Fairmont Royal York.

“It was the first urban beekeeping rooftop hotel project so far in the world, as of yet undisputed; we were the first. In 2008, the chef and I collaborated to push the environment stewardship program a little bit further – at the time I was working for Fairmont,” Coates recalls. “We didn’t know how to bee keep so we approached the Toronto Beekeeper’s cooperative and we formed a partnership with them.”

Coates says that decision back in 2008 changed her life and habits.

“At the time when I adopted some of the practices of a beekeeper, number one, put your cell phone down, you don’t need to have your cell phone, you’re not going to answer your cell phone when you’re caring for a bee,” Coates explains. “It really is a time to listen, understand, know that we’re very connected to nature.”

A hotel rooftop isn’t the only place one can find urban beehives in Toronto. Approximately 30 miles northwest from downtown Toronto is Pearson International Airport.

Manager of environmental services at Pearson Airport Derek Grey says the airport’s YYBeeZ initiative is more than a novelty.

“First off, I just thought it was a really cool thing that we could do – and, again, our family’s always had lots of honey – but understanding the threat and pressure that the bees and other pollinators are having due to climate change, the pesticides and some very weird bizarre parasites that are impacting them right now as well,” Grey points out. “And understanding the whole education around – that a third of the food we eat on a daily basis is the result of the work of honeybees and other pollinators and the way we decided to industrialize our farming and food production really puts those at risk.”

Tending to the hives,  named after the airport’s code YYZ, is resident beekeeper Kuldip Jassal, who also works at Pearson as a civil servant.

Jassal started experimenting with urban beekeeping three years ago in his backyard after reading that local honey could act as a natural remedy for seasonal allergies. Through that experience, he came to realize that the urban area of Toronto is a great habitat for bees.

“Community gardens have popped up around the city, people’s backyard, even people in the condos keeping flower pots on their balconies. All this contributes to the health of bees. All types of bees,” Jassal says. “Different types of food source will give them a lot more strength and enable them to survive a lot better. Also the temperature difference. There is a huge temperature difference in the urban setting, especially in Toronto; it’s always warmer than the rural areas.”

Ontario’s law that prohibits the sale and use of pesticides for cosmetic purposes on lawns, gardens, parks and schoolyards also makes Toronto a great habitat for honeybees. Herbicides, fungicides and insecticides that have been linked to bee deaths are banned.

Bees pollinate an estimated one third of crops humans depend on for food. But around the world they are under threat from a variety of factors. Pesticide use, habitat destruction, drought, air pollution and climate change have all contributed to declining bee populations.

In May 2016, the European Commission adopted a two-year ban on three of the most harmful pesticides for honey bees. Scientists will use the two years to assess the recovery rate of honey bees and build a case for a longer-term ban on these and other pesticides.

Since purchasing his first 5,000 honeybees, Jassal has become an outspoken advocate for bee health. He regularly conducts outreach activities at local schools as part of YYBeeZ and while out and about in the city he freely expresses his gratitude to Torontonians for their contribution to bee health.

“During my daughter’s summer camp there was a lady who put a lot of energy and effort into her garden. I said ‘thank you.’ And she goes ‘for what?’ And I go, ‘well, you’re supplying food for my bees.’ She’s like ‘what bees?’ I go, ‘I’m an urban beekeeper, I keep honeybees around the neighborhood.’ The next day I brought her a jar of honey, and said this is the hard work the bees did from your garden. I said people like you who put the energy and dedication into their garden to look beautiful, it looks stunning, but the other micro level is your helping pollinators, with local nectar and pollen, to survive, not just honeybees, but all pollinators, which is very important.”

The future of honey bees around the world is uncertain but in Toronto they may have a refuge. With these beekeepers and city residents speaking up for the pollinators, by instituting the Toronto’s pesticide ban, urban garden initiatives and protecting natural habitats, honeybees and wild bees may be safe in YYZ.