Support for Standing Rock Sioux protest against pipeline spreads across the U.S. 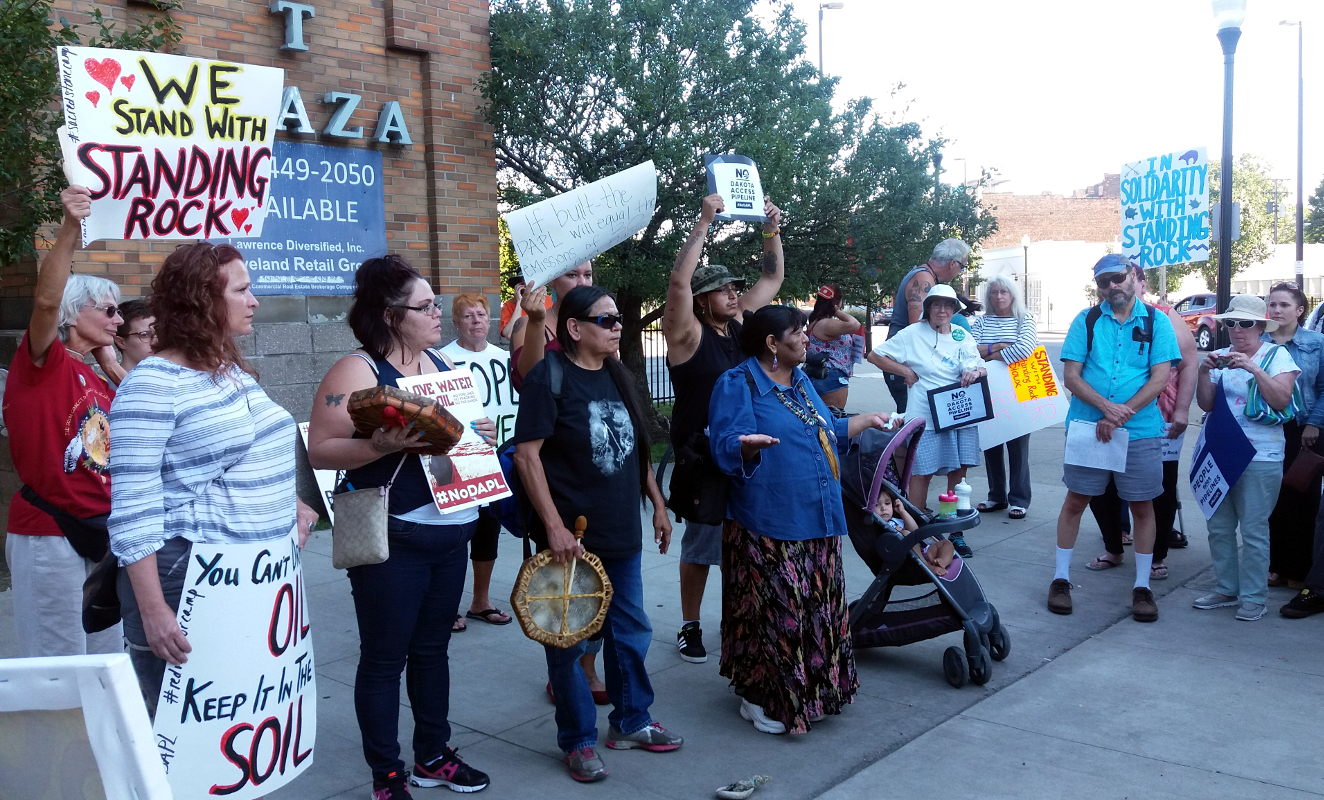 Despite intervention from the federal government, construction on the Dakota Access Pipeline continues in North Dakota. Protesters locked themselves to construction equipment for a second day Wednesday, about 70 miles northwest of the Sacred Stone camp.

Riot police carrying assault rifles blocked all access to the site Tuesday after about 100 activists brought the work to standstill. At least 22 people, including two journalists, were arrested. They were supporting the Standing Rock Sioux tribe in its fight to stop the $3.8 billion pipeline from passing through what the tribe says is culturally significant land.

Elsewhere around the U.S. Tuesday, thousands of nonviolent protesters took to the streets in support of the tribe. FSRN’s Larry Buhl reports demonstrators in Cleveland, Ohio joined the nationwide day of action.

A crowd of about 50 people gathered in downtown Cleveland Tuesday, carrying signs saying We Stand With Standing Rock, “People Are Greater Than Pipelines, and the motto of the Standing Rock Sioux tribe — Water is Life. Their reasons for joining the action were varied.

“The struggles of the Sioux in Standing Rock and the struggles we face in northeast Ohio are connected,” Sam Horn explains. “The violence native people have faced for hundreds of years continues to this day is continuing in Standing Rock with the use of attack dogs, with the uncovering of ancient burial grounds.”

“And these people here are saying that we don’t need to build any more expensive pipelines for a form of energy that is going to be antiquated before the pipelines are finished,” points out Susan Honda. “We just have the residual problem of investments in this old kind of energy.”

“It’s an issue of environmental justice. It’s about a pipeline. They decided not to have the pipeline run through predominately white Bismarck and instead have run near the reservation, where it’s a threat to their water supply and millions downstream,” says Brooks Berndt, environmental justice minister for the United Church of Christ in Cleveland. “It’s also a faith issue in that it involves an issue of desecration of sacred grounds and lands when they did the bulldozing.”

The legal battle is complex and ongoing. Last month, the tribe filed suit challenging the Army Corps of Engineers’ decision to grant permits to Energy Transfer Partners to construct a pipeline at more than 200 water crossings along its nearly 1,200-mile path. The tribe and their counsel, Earthjustice, maintain that the project violates federal laws. They also sought a temporary injunction blocking construction while the court considered their case.

But within minutes, three federal agencies stepped in and blocked work on a small section of the pipeline set to run on Army Corps land near Standing Rock lands. In the statement, the departments of Justice, Army and the Interior said significant questions need to be answered about the environmental impacts of the pipeline that would run under the Missouri River.

The government also asked Energy Transfer Partners for a voluntary pause on a 40-mile strip of the contested pipeline. So far, the company has complied and halted construction within that small segment — but work continues nearby.

That’s what triggered more protests in North Dakota Tuesday, where activists locked down to construction equipment once again.

One demonstrator locked to a piece of heavy equipment spoke to Unicorn Riot Media Tuesday, saying construction of the Dakota Access Pipeline continues, “contrary to what a lot of folks thought after last Friday’s intervention by the Obama administration making it seem like they were going to stop the pipeline.”

In a statement Tuesday, Energy Transfer Partners said they plan to meet with government officials.

Craig Stevens, a spokesman for the oil industry public relations group Midwest Alliance for Infrastructure Now, says that a thorough environmental review of the project has already been done.

Also Tuesday, the Chairman of the Standing Rock Sioux Tribe issued a statement saying they would follow “all legal, legislative and administrative options” to stop the construction.

Stephanie Tsosie, an attorney with Earthjustice, says they’ve appealed the court’s refusal to halt work on the pipeline

Protests near the contested part of construction have been ongoing since April, but reached a critical mass last month and garnered national attention after widely circulated video captured by Democracy Now! showed pipeline private security using attack dogs and pepper spray on protesters who blocked bulldozers. Morton County, North Dakota, issued an arrest warrant for Goodman for what it called criminal trespassing.

Demonstrators at the production site in North Dakota say that despite the increased presence of law enforcement, peaceful protests will continue until all construction is stopped.