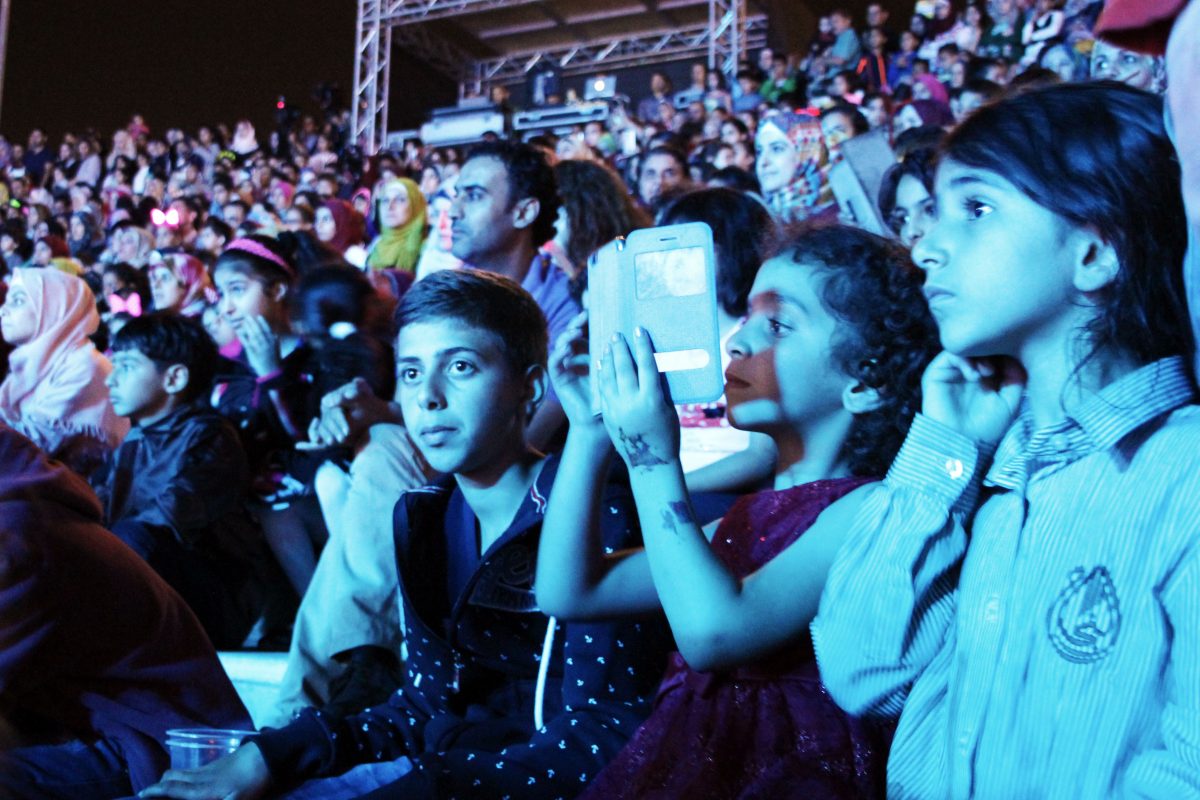 In the Palestinian West Bank a circus school just marked its 10th anniversary with a big festival. It invited circus troupes from around the world to participate. But in Palestine, even doing circus presents a challenge. Lena Odgaard reports.

In a public park in Ramallah in the West Bank, thousands of Palestinians of all ages gasped, laughed and clapped as artists from countries including Germany, Denmark, Argentina and Mexico performed acrobatic stunts. It was the gala opening of Palestine’s first international Circus Festival and for many the first time to see circus acts.

The festival was hosted by the Palestinian Circus School and marked its 10th anniversary. When the school first opened, there were few indications that circus would become this popular.

At the Circus School near Ramallah students were busy making decorations for the festival out of empty soda cans.

“I remember, the first class we had, we were three trainers and three students,” recalls Shadi Zmorrod, one of the school’s founders.

Today more than 300 students attend classes here and the school is continuously expanding. But circus is still widely unfamiliar to many Palestinians.

“People think circus is an animal, a clown – make us laugh,” Zmorrod explains. “We try to do shows that have a message about education, about recycling.”

Not everyone believes such messages are important in an area affected by almost 50 years of Israeli occupation.

“We had one from the public in one of our shows say, ‘You are turning the concentration of our own public from resistance to circus.’ And he left with his daughter [who is] three-years-old.”

Zmorrod told the man that he believes circus is a way to resist. Later during the show, he suddenly noticed that the man had returned.

“We choose circus and art, physical expression, to resist against the occupation, to give higher self esteem level for our kids so they can be our future ambassadors abroad,” Zmorrod says.

“I grew up here. I was raised by the circus,” says 17-year-old Mohammed Azzeh, who has been a student at the school since its opening.

Two years ago Mohammed was shot and critically injured by an Israeli sniper at a protest of the Israeli occupation. Two other young men were killed. Footage published by CNN showed that none of the boys posed a threat when they were shot. The incident didn’t stop Mohammed from doing circus. But it did made him reflect.

“Everyone has his way to resist, to fight,” Azzeh explains. “I see from experience that the circus is more effective than protesting with a stone or with a gun.”

In addition to classes in stunts on the trapeze and trampoline, the Circus School tours the West Bank and Europe with shows that tackle the occupation as well as conservative social values. For Zmorrod, circus is a way to foster change in society.

“I don’t like the public to come, to laugh, to join, to clap, and leave,” Zmorrod says. “No, I need to challenge them.”

But the challenge isn’t always welcomed by local audiences. One show, which referred to menstruation and sexual harassment in the streets, seemingly crossed a line.

“The show started and after 10 or 15 minutes, they all left,” Zmorrod recalls. “We talked about real things in life, but when we talk about it on stage, they refused it.”

According to Zmorrod, such incidents are rare. He is proud of the fact that an equal number of girls and boys attend circus classes.

“Women in our community don’t have a big role so I think circus is a huge thing for changing our society,” says 16-year-old Dareen Awwad, who started at the circus school three years ago. “For the first time, girls can perform for shows in Palestine.”

Like many aspects of life in the occupied Palestinian territories, running the circus school has its challenges. Trainer and clown, Mohammed Abu Sakha, has been detained by the Israeli military for more than six months without official charges. The challenges increase when trying to put together an international festival. The anniversary program underwent last minute changes when Israel refused to issue visas and permits to circus groups from Kenya, Morocco and Gaza. Other artists spent hours in security interrogations upon arrival.

The group Los Cabaret Capricho from Mexico were among the artists who made it. Group member Cesar Omar Barrios is aware that doing circus in Palestine is not just about entertainment.

“If there is a function for art, one of them is to be political. Circus and clowning inspire,” Barrios says, “The young generations need to get inspiration to make a better way of life for everyone.”

Under the slogan ‘united for freedom’, the festival seeks to shed light on restrictions in freedom of expression and movement due to the Israeli occupation. The Palestinian Circus School hopes to make the international festival a biannual event.