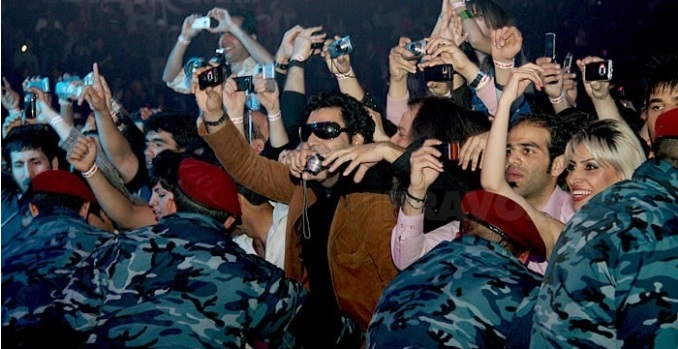 What do we picture when we hear the word “Iran?” Usually, men and women dressed in black Islamic robes, separate education for boys and girls, modesty and austerity. Few remember that years ago, Iran was the most liberal country of the Middle East and the lifestyle of common Iranians, at least in big cities, was quite similar to the counties of Southern Europe, such as Spain or Italy.

Thirty-five years ago, the Islamic Revolution changed the political regime, but it could hardly change people’s habits and world views. FSRN’s Garegin Khumaryan takes a look at one technique that common Iranians use to overcome prohibitions and do simple things that people many other countries take for granted.

Ali walks across the floor of a restaurant where he works, bearing what would be forbidden literature in his homeland of Iran. He opens the booklet and reads off internationally- recognizable names.

Smirnoff, Absolute or Jack Daniels have a universal meaning in all languages, but they take on an additional nuance when pronounced with a slight Persian accent.

Ali is a waiter in Yerevan and the city is home to a particular type of tourism, one in which Iranians can escape religious dress codes and the alcohol prohibition that has been in effect since the country was declared an Islamic Republic in 1979.

Despite the ban on alcohol, Ali says he used to drink more when he lived in Iran: “In Iran, there is everything your heart desires. You can find everything from this menu there. Of course, it is not freely distributed but it exists: vodka, whisky, brandy, wine. It’s being smuggled from Armenia or Iraq or elsewhere. So nobody can claim that there is no alcohol in Iran at all.”

Persistent consumption of alcohol is punishable by the death penalty under Iranian law, which is governed by a form of Sharia code.

Roobik Ghahraman-Mounasian, an Iranian ex-pat and magazine editor, explains how Islamic laws developed in the 7th century work in the 21st.

“They have two different types of police: the usual police, the one that exists in all countries, and so-called ‘moral police,’ which is in charge of Islamic norms and prohibitions.”  says Ghahraman-Mounasian. “Once, I was stopped in the street because of my long hair; they just warned me. Then because of the sleeves of my t-shirt; they considered them too short. Another time, because I was just sitting with a girl in the backseat of a car. And so on.”

Ghahraman-Mounasian says enforcement has become less strict over the years to the point that the morality police are seen as more annoying than dangerous. But they still prevent average Iranians from being able to do simple things that people do in most other countries can do without fear of reprisals. That’s what tourism in Armenia has to offer.

“It’s hard to explain, but when I first left Iran many years ago, I experienced an odd sensation that a very heavy burden had fallen off my shoulders: a burden that I lived with but never felt before,” Ghahraman-Mounasian recalls. “And now, when I sometimes go back to Iran as a visitor, I start feeling that weight again.”

Armenia is Iran’s only Christian neighbor and the 20-mile-long border region is a place where residents of the northern provinces of the Islamic Republic can drive to have a glass of beer, smoke a cigarette in public, dress as they like, walk the streets arm in arm, or go to a pop music concert.

Davud Zifdar works in a modest office in Yerevan. There are no banners or signs outside as he doesn’t want to draw unwanted attention. His clients already know where to find him. The inside walls are covered with playbills and posters. This is show business in exile.

Zifdar points outs Iranian musicians who live abroad and arrange private concerts through his company; a galaxy of stars unable to perform at home. Most of these pop-singers moved to the United States and interact with their fans using stages of other countries.  Zifdar says Armenia is the closest and the most convenient place for Iranian concerts in exile.

“We have a similar office in Tehran where we accept ticket orders and here we organize housing for the people coming to attend the concerts,” Zifdar says.  “So, I think what our company is doing is more tourism rather than showbiz.”

However, Iranians visiting Armenia do not fully comply with the definition of a tourist in the usual sense of that word. They are not so much interested in visiting sights and attractions, nor do they usually seek out Armenian cuisine.

Henrik Navasardyan owns and operates one of the most popular Persian restaurants in Armenia – a favorite among Iranian guests.

“Before the Islamic revolution there was a very popular wine variety in Iran. It was called ‘Shirazi.’ When someone comes here for the first time, the first question is always the same: do we have that kind of wine here? Of course we don’t, because that wine and any other Iranian wine hasn’t been produced for more than 35 years,” Navasardyan explains. “But Iranians still remember it as a symbol of their past life – the pre-revolutionary years when Iran was the most liberal and free country of the Middle East. So they come to Armenia not for any Armenian things, but for quenching their thirst for the old Iran and their past lifestyle.

In that sense, Armenia is a time machine for Iranian visitors. It takes older generations back to past freedoms and gives the youngsters а vision of the future.