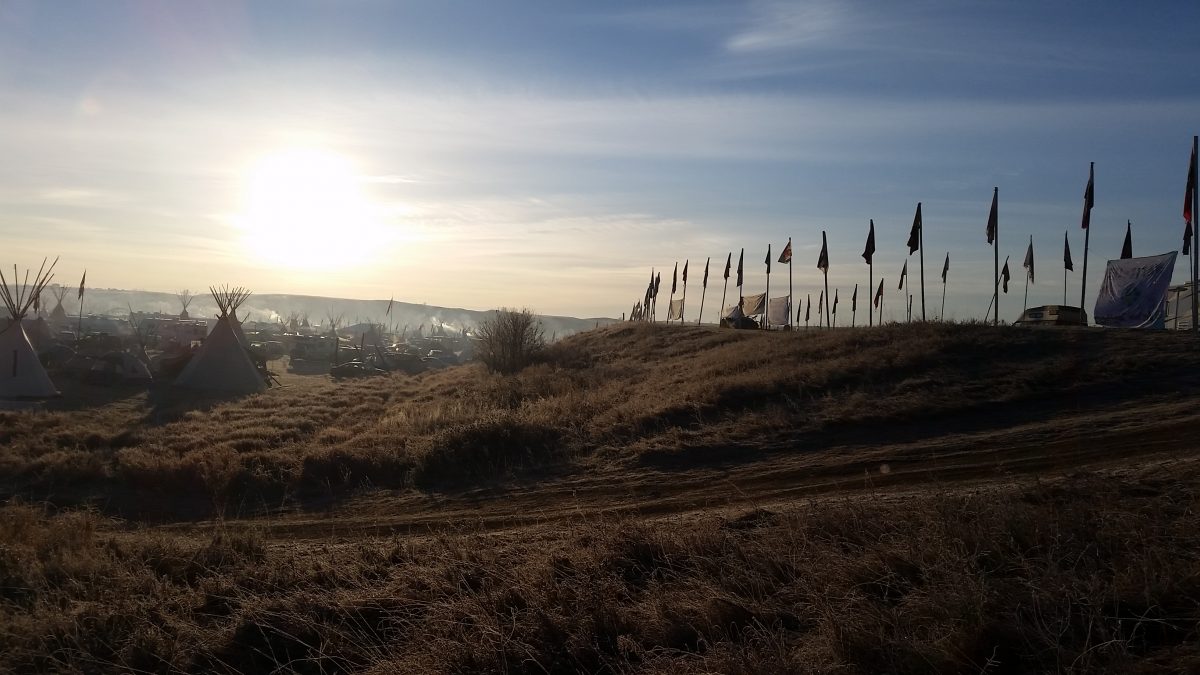 After issuing an eviction notice to the Standing Rock Sioux, the Army Corps of Engineers now says it has no plans to forcibly remove thousands of people fighting the Dakota Access pipeline in North Dakota – but the land will still be closed to the public December 5 and those who remain do so at their own risk. The public statement followed a letter delivered on Black Friday, the day after thousands of tribal members and their supporters gathered for a Thanksgiving feast. Molly Stentz reports from North Dakota.

Indigenous women led a silent prayer march Sunday to the blockaded bridge that’s become a flashpoint of the stand-off over the controversial Dakota Access Pipeline project. The march was but one sign that Native American protesters and their supporters have no intention of breaking camp.

On Friday, the U.S. Army Corps sent a letter saying that public access to the main protest camp, called Oceti Sakowin, was closing. Everyone would have to move within the week – or face trespassing charges. The camp sits at the confluence of the Cannon Ball and Missouri rivers, next to the Standing Rock reservation, on land managed by the Corps. It houses thousands of volunteers who have come from across the country to help the tribe fight the four-state, nearly $4 billion pipeline, which would carry oil from the Bakken fields of North Dakota down to existing pipelines in Illinois.

Opponents of the pipeline have dubbed themselves water protectors and they’re worried about oil spills contaminating the Missouri River and the millions who depend on it for drinking water.

The pipeline itself runs about a mile north of the camp, guarded by clusters of Morton County Sheriff deputies who’ve blocked the road leading to it with concrete barriers and razor wire. The Corps says it wants to move the camp for public safety reasons, citing harsh winter conditions and violent confrontations between protesters and police. They want it moved across the river to an area they call a designated free speech zone.

Nick Tilsen, an Oglala Lakota Sioux member, says his people have been forced off their land by the U.S. government before – but no longer: “Indigenous people are here to stay. We’re not going to move unless it is on our own terms. Because this is our treaty land. This is our ancestral land. This is where our people have been for thousands of years.”

Another Oglala Lakota Sioux tribal member, Isaac Westin, says the Sioux Nation has treaty rights to the campsite land that are not being respected. Access to water and hunting land are spelled out by the Fort Laramie treaty that was signed between the Sioux and the U.S. government back in the 1800s. But the U.S. later went back on that treaty. Subsequent court rulings have upheld that land was unconstitutionally taken from the Sioux. The government was ordered to pay the Sioux back – money they have refused to accept in lieu of the full return of their land.

“The Army Corps of Engineers, they aren’t our landlords. As it states in the treaty, that us, as the Oceti Sakowin, the Lakota, Dakota, Nakota people, we are the wardens of the land,” Westin says. “This is our land. They can’t remove us. They need to respect our treaties and respect our rights.”

The camp houses all kinds of structures on the flat, bare dirt between the highway and the river. There are large green army tents heated with cast iron wood stoves, yurts, hogans, RVs, school buses, teepees. A village has sprung up on the land: there are kitchen tents, meeting tents, a clinic, several schools, makeshift roads lined with logs and tribal flags, and several large campfires used for ceremonial prayer. The camp’s population has swelled from several hundred people to now several thousand.

Standing Rock Sioux tribal chair Dave Archambault isn’t worried that the camp will be evicted. He sees this letter as more of a warning that the tribe has to assume liability for anything that happens at the camp.

“If Morton County wanted to, they would be able to come in and remove us,” Archambault points out. “I don’t think that will happen. I don’t think the Corps of Engineers will come in on [December 5] and try to remove us.”

That sentiment was echoed across the camp, as people quietly went about their daily chores: preparing food, chopping firewood, refilling water jugs and propane tanks. Tribal leaders say they’re preparing another campsite nearby that will house supporters throughout the winter. There are also other, smaller camps nearby, across the river, on reservation land. The Army Corps issued another statement on Sunday, saying they have no plans to forcibly remove anyone from the land, though anyone remaining could be charged with trespassing.

Twenty-three members of Congress have joined tribal leaders calling for President Obama to intervene and deny the final permit to complete the pipeline. The Army Corps says it still needs time for further consultation and review before granting the final easement necessary for the company to drill underneath the Missouri River. But Energy Transfer Partners – the company developing the pipeline – says it already has the required permits, and has asked the Circuit Court to intervene.

A previous lawsuit in federal court seeking to halt pipeline construction was unsuccessful.

Tomás López, Jr. of the International Indigenous Youth Council says many native people are feeling ignored by the President. The tribe registered their opposition to the project two years ago – and many of their supporters have been camping out near the pipeline since April.

For now, the camp is a buzz with the sound of chainsaws and generators as volunteers work day and night to winterize the camp. They’re constructing insulated buildings for people to sleep inside as evening temperatures plummet. Snow has begun falling.