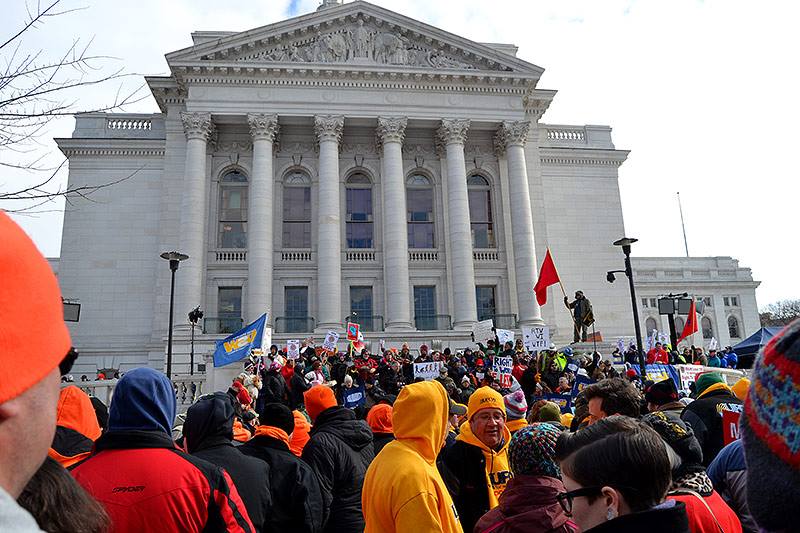 Wisconsin could soon become the next “right to work” state. State Republicans are fast-tracking a bill that would allow union workers to opt out of paying dues, a move largely seen as another GOP attempt to weaken organized labor. This comes four years after Governor Scott Walker cut union rights for public workers. From Madison, Wisconsin, Molly Stentz reports.

Controversial right-to-work legislation is moving fast in Wisconsin. Republican senators introduced the legislation Monday, held a public hearing Tuesday, and debated the bill Wednesday, passing it the same day. One Republican broke ranks, joining all Democrats to oppose the bill, but the bill squeaked by with a slim majority. Crowds gathered to watch the Senate proceeding and chaos erupted as the bill passed.

“This is something that could, once again, jump-start the state’s economy, and create jobs that right now we are losing to other states,” said Senate Majority Leader Scott Fitzgerald. “Plus I think it also protects some of the jobs that are here in the state that right now could be subject to eventually a manufacturer saying it’s a little bit easier to build widgets in North Carolina than Wisconsin.”

Democrats tried to block or change the bill in a variety of ways, including exempting the Green Bay Packers from the law, raising the minimum wage, and delaying the start date of the bill. All were voted down on party-line votes, with all Republicans against.

Democratic Senator Jon Erpenbach called this bill yet another attack on Wisconsin’s middle class: “I don’t know why we make it so difficult that once somebody reaches the quote, unquote middle-class, why we make it difficult for them to stay there. I don’t understand that. Legislation, after legislation, after legislation that’s come through here, goes after the majority of the people of Wisconsin who are in the middle-class. I don’t know why when people come from a generation where their parents gave them an opportunity to make their lot in life better– and once they get there–we make them take a paycut with legislation like this.”

The bill has sparked two days of protests at the State Capitol with thousands of labor union members and their supporters rallying against the bill.

Laborers Scott Kenolly and Kevin Hall from La Crosse, Wisconsin fear this legislation will drive down wages across the state, saying it not just “about us union workers,” but about everybody and “keeping the standard of living up in Wisconsin.” Kenolly added “not only will we lose our wages, but people less experienced than us will lose wages. Pretty soon our country’s gonna be nothing but rich and poor. There will be no middle class left.”

The legislation would allow employees of private companies to opt out of paying union dues as a condition of employment. It would not exempt unions from their legal responsibility to represent all workers covered by a collective bargaining agreement, regardless of union membership or payment of dues.

The bill now advances to the Republican-controlled State Assembly, where it is likely to pass next week. Governor Walker has pledged to sign the bill.

Another rally is scheduled Saturday. Protesters will march from the University of Wisconsin campus to the State Capitol.