How the battle for Mosul may bring independence to Iraqi Kurdistan 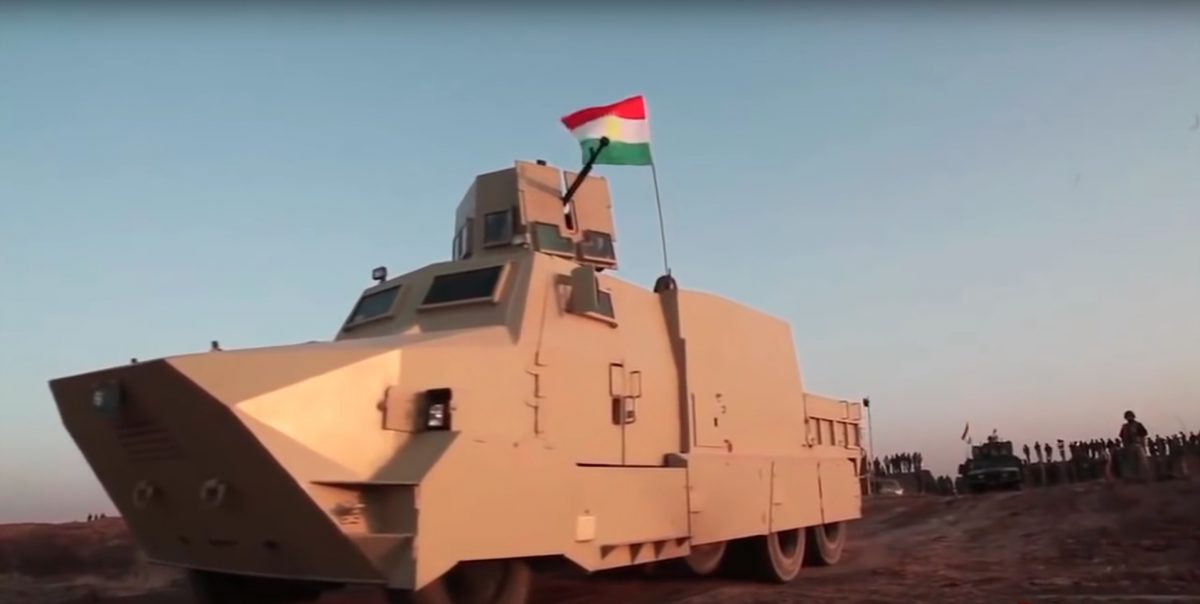 Kurdish forces at the Battle of Mosul in 2016. (Photo credit: Screengrab via Dogs of War / YouTube)

An independent Kurdistan may very well become a reality in the new year. Authorities in the Kurdish Autonomous Region of Iraq have confirmed their intention to hold a referendum on independence from Iraq after the battle for Mosul is over and the ISIS expelled from the city. Thirty million Kurds living in Turkey, Iran, Iraq and Syria have never had their own statehood and this coming attempt to gain independence is in the spotlight of Middle Eastern media.

Garegin Khumaryan reports from the Armenian capital city of Yerevan, which would become the nearest capital to the Kurdish capital city of Erbil if the referendum is successful.

Kurdish activists sing an anthem of a state that doesn’t exist yet. “We are the youth – the red color of our revolution,” it says, “as long as we are alive the Kurdish flag will never fall.”

The singing becomes intensely emotional as the lyrics tell the story of many Kurdish families: ”Look how much blood we have been forced to shed.”

Having reached this couplet, one of them – Nihad Kanan — starts stumbling and is visibly overtaken by anxiety.

“He was thinking something – feeling something. His uncle, one month ago, died in war with ISIS. I think he remembered that,” Mohammad explains.

Nihad’s uncle died in the battle for Mosul – an Iraqi city that, despite being located outside Kurdistan, has become an important symbol for the Kurdish people. The self-proclaimed Islamic State attacked and captured the city in 2014 on the eve of what was supposed to be an independence referendum in Iraqi Kurdistan. After Mosul fell, Kurdish authorities thought it would be too dangerous to start building a new nation with ISIS only 50 miles away from their capital city of Erbil.

The battle for Mosul has been brutal. Nearly 100,000 civilians have been displaced, 1 million remain in the city caught in the crossfire between Iraqi forces and ISIS. The internet is full of videos made by Iraqi troops and Kurdish self-defense forces. Iraqi troops attack in the daytime, ISIS counterattacks at night. The fighting is relentless.

Kurdish authorities say the referendum will be held only after the so-called “caliphate’’ is expelled from the city.

“Shortly they will have a special referendum, after the fall or liberation of Mosul,” says Ara Papian, a think-tank director and a veteran of the diplomatic service of Armenia – a country that supports the idea of Kurdish independence so much that it is ready to convert its existing consulate in Erbil into an embassy. “People who speak against the Kurdish statehood or predict that it will fail, they say that they are not organized and are not prepared for statehood. But when we look at Arabs after the first World War, they were less prepared, but they did not fail – they created more or less successful countries.”

If the referendum is held and independence is declared Kurdistan would have territory of around 25,000 square miles neighboring Iraq, Iran, Syria and Turkey; a population of more than 5 million people; and rich oil and gas deposits. Its army, the Peshmerga, would have a force of 120,000 soldiers.

Kurdish activist Nihad Kanan, a representative of the Association of Kurdish students in Armenia, says the words “peshmerga” and “Kurd” have become synonyms, as everything Kurds do they do it for their independence, be it on the battlefield or in the university auditorium.

“All Kurds, anywhere, everywhere. As we are outside Kurdistan, we want to help Peshmerga by the pencil, by the idea. Mr. President Barzani stated that we do not want to fight any country, anybody, and we don’t want anyone to fight us.”

Nihad Kanan is one of 4,000 Kurdish students studying abroad. He and his peers are expected to import the knowledge and traditions of statehood from the countries where they study and become future leaders back home.

Halgurt Mohammad is certain they will succeed: “We are famous with petrol, with oil. We are thinking to be a part of OPEC in the future. But not just that. If you compare Erbil with other cities of Iraq, Erbil is the best. And if ISIS doesn’t come to our country, we think Erbil will become the second Dubai in the Middle East.”

In a recent speech, Turkish President Erdogan stated that Turkey would no longer tolerate military threats near its borders and would send troops to Mosul.

He didn’t explain who exactly he had in mind.The Turkish army has already invaded Northern Iraq several times to fight Kurdish armed groups. Many political analysts note that Turkey seems more focused on chasing Kurds and thwarting their referendum than fighting ISIS.

However, former Ambassador Ara Papian is certain that the Kurds will gain their independence – at least within the territory currently known as Iraqi Kurdistan.

When the referendum does finally takes place, it will be watched closely by Kurds throughout the Middle East, and by the governments of neighboring countries that have thus far refused to recognize Kurdish dreams of self-determination.