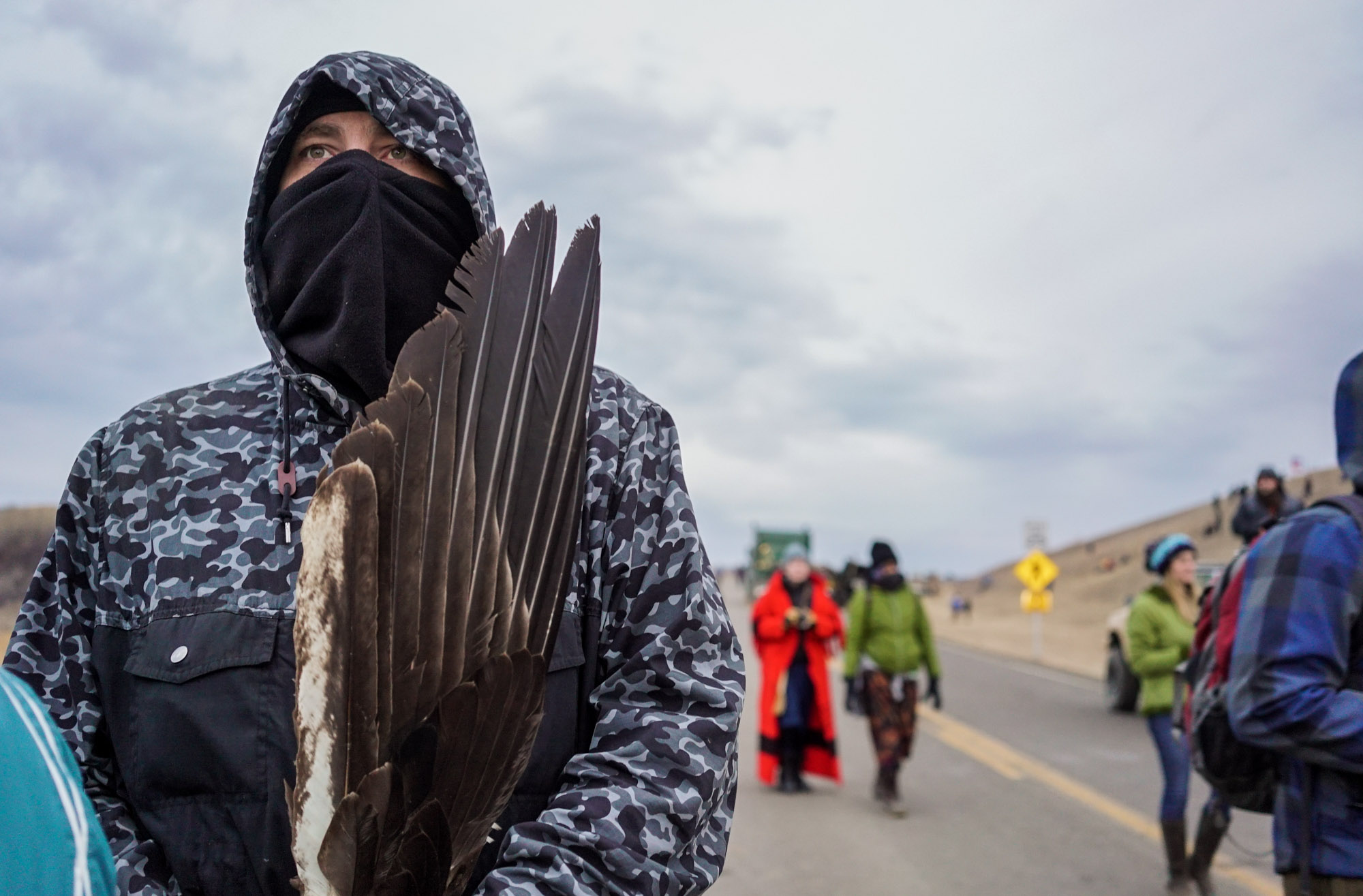 The Army Corps of Engineers’ denial of a key permit to the company behind the Dakota Access pipeline has been hailed as a victory for the Standing Rock Sioux and for the thousands of their supporters who have camped out in the area – some for several months now – to prevent the construction of the pipeline that was slated to cross the Missouri River; a source of drinking water for millions of Americans. While the permit denial has brought relief to some of the activists, others have decided to remain in position.

Reporter Amy Nelson went to the Oceti Sakowin camp near the confluence of the Missouri and Cannonball rivers to ask residents what motivated them to brave the winter conditions to stand with Standing Rock.

Angel Martinez (Fort Madison, Iowa): My particular calling, I think, was for my daughter, because someday I know she’s going to have babies and I just want a cleaner environment for her and for my grandkids. It’s been an emotional awakening for me; my first time here, we talked about coming back right away, I mean the whole way home, we’re like, “we gotta get back.” And then, two and a half weeks later, we’re back. Now we’re like, “we gotta get back again.” It just draws you here, it’s like we’re all connected, everyone is supposed to be here right now.

Matthew Otterson (Island of Maui): The actual turning point was when they started bulldozing the burial sites on Labor Day that were mapped out for them. That was the last straw for me. Once I got here, and after two days of crying over the power of it all, I went to a meeting and they really needed volunteers for heating, there was nobody. Now I am the stove guy; I wear green tape on my sleeve and a radio, and anybody who needs any kind of heat or has smoke problems, or heating problems, or a stove install, we coordinate the crew.

Tala Ali (Cincinnati, Ohio): You know, we hear about what was done to the Native Americans and we think about it in this abstract way, as if it’s in the past, but it’s actually still happening. I would like to think that, were I to have been alive during slavery, would I be putting my body on the line to stand against mankind’s worst moments in history – to fight off oppression. And I want to be on the side where, “No, I’m here and I’ve come ready to die.” This is fisabilillah, as someone of Palestinian heritage, it’s the same thing, it’s the same exact struggle. It’s genocide, it’s co-opting a land, a heritage. I think the question should be why aren’t you not here? How are you not here when this is happening?

Victor Rodriguez (Spokane, Washington): I was trying to figure out, besides social media, what I can do and my friends told me, “Hey, we’re coming from Seattle, we’re going to pass by Spokane” – that’s where I’m at – “we’ll be passing by in an hour, is there anywhere we can eat there?”

And I said, “Where you going?”

And I’m like, “I’m going.” When we got here, we got an SUV full of supplies, bought a generator, heaters. We donated about $1,000 from our friends and we did our thing to bring our supplies. And then we just decided to stay a few nights. I started sweeping the floors here at the mess hall and then cleaning tables, and then next thing you know they’re saying, “You know what Victor, you can go ahead and take over the mess hall, just make sure you do what you’re doing and get it ready for every meal.” And so, I’ve been doing that ever since.

This is something very real. This is not a festival, a Coachella, or anything like that. This is here to support people, get out there, volunteer and do what you’re here to do, and it’s to help the people that are in the struggle and the movement here.

Nicholas Haddad (Toronto, Canada): What I’m going to take away from this place, what I’m going to tell people when I go home, is that what I found here is that there is a way to live without excess. And the key is to do it together; if everyone brings a little bit to the table, then we can do things, you know, we can clean, we can feed each other, we can live a more sustainable lifestyle. But the key is to do it together, to bring something to the table, and to watch other people – see what they want. What can you do for them? And they’ll do for you. There’s another way to live. There’s another way to live without being claustrophobic in our little corners, because the more we isolate ourselves, the more we’re scared. These people here aren’t scared, they’re proud.

Nick Tilson (Porcupine, South Dakota on the Pine Ridge Indian Reservation): [Greeting in Lakota.] I’m Oglala Lakota, father of four children, and I’m here representing the Indigenous People’s Power Project. We’ve been here since August helping the campground ourselves, and nonviolence and nonviolent direct action. We were told in ceremonies that we needed to continue to do what we do, that if we stay nonviolent, and we stay prayerful, that we will win. And so we ask that Morton County and the Army Corps of Engineers, be honest, tell the truth. When they see us coming forward, when they see us at these actions, when they see us making a stand, they see us in prayer, they see us peacefully. But they have been acting aggression upon us. We want America to know that, as indigenous people, we are not victims. This movement exists here because we are powerful, because indigenous people have reclaimed power and because we have been doing it through our indigenous values.