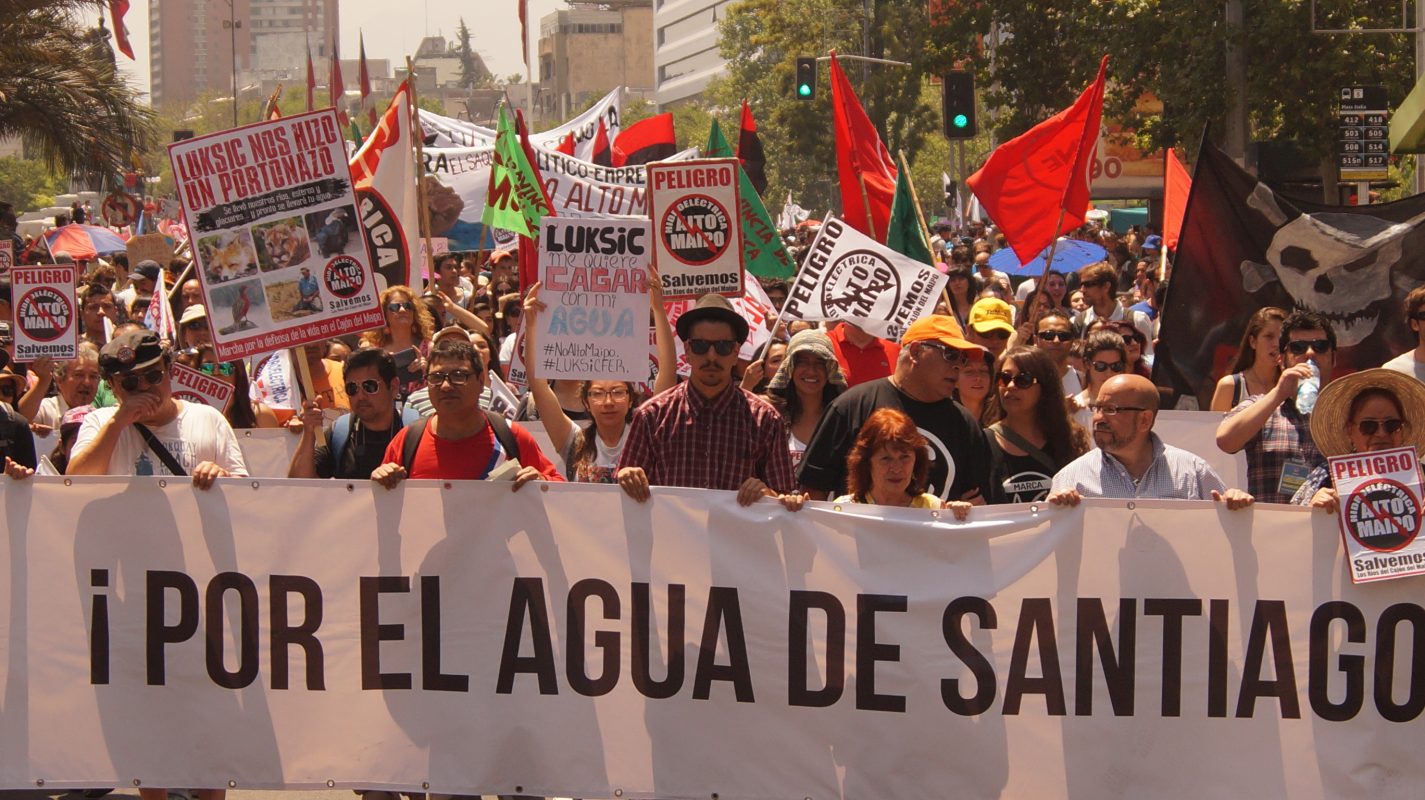 At least four million people in Chile’s capital city, Santiago, had their water turned off from Saturday through Monday. The shutdown affected households in 27 of the city’s 35 municipal districts. It’s the latest chapter in what has become an extended fight about water in Chile, putting the country’s population in competition with its highly influential mining sector. FSRN’s Robert Packard reads for Joshua Tucker, who reports from Santiago.

Most of Santiago’s the six million residents woke up last Saturday morning to dry taps after the privately-operated provider of water to the Chilean capital shut off the city’s water supply. The company, Aguas Andinas, said the shutoff was necessary because avalanches triggered by heavy rains had dumped sediment into the city’s primary water source: the Maipo River. While the two-days without running water was a massive inconvenience, service was restored late Monday. But the story doesn’t end there.

The Maipo River provides 70 percent of the city’s water and has been threatened for some time. Despite seven years of opposition, a hydro-electric project to reroute the river and funnel it through a tunnel outfitted with turbines is now under construction in the same area where Aguas Andinas draws water for the people living in Santiago. And the energy created by the controversial project? It’s not to supplement the local power grid; it’s designed to generate electricity to operate a mine.

The project, called Alto Maipo, is owned by a multinational company based in the United States. A Chilean congressional committee unanimously opposed the project, as did Aguas Andinas initially, which cited the risks deforestation and construction along the river pose to Santiago’s supply of drinking water. But the water company switched gears.

“What we’re seeing in this case, I think, is a private company that is potentially putting six million people at risk of not having drinking water,” explains American environmental lawyer, and International Director of Futaleufú River Keeper, Patrick Lynch. “They’re doing it because they’re profit seeking and they’re not regulated. They’re very lightly regulated. That, to me, I think is the big issue.”

Water has long been a major issue in Chile, where much of the country’s supply is often stored in glaciers. Following the Pinochet dictatorship, economic and regulatory restructuring opened to the door to large scale privatizations of the country’s water. Chile eventually became the first nation in Latin America to privatize all of its urban water and sewage systems, resulting in short-term, profit-driven resource management.

When it comes to access to water and energy, Chileans must compete with the mining sector, one of the world’s thirstiest industries and Chile’s top source of revenue.

For years, indigenous communities, environmental groups and tourism companies have opposed the the Alto Maipo hydroelectric project. At a march along the banks of the Maipo months before the water shut off, a protester named Julio explained why.

“We are defending the Santiago Basin and the potable water of Santiago, our region’s water,” Julio explains. “We’re here to defend the Maipo and its waters, we want rivers in the Maipo watershed to run free. We don’t want intervention from big multinational companies or water being used for mining.”

In December, thousands more marched on the presidential palace for the fourth time in two years. Protesters followed a banner that read “No to the Alto Maipo Project Now, For the Water of Santiago.” Many spoke out against the dangers to drinking water posed by the nation’s number one industry, copper mining, which is set to increase its water use by 66 percent by 2025.

Despite initial opposition from the Chilean Congress, the U.S. Secretary of Commerce and the then-U.S. Ambassador to Chile applied pressure to Chilean cabinet ministers, citing potential “damage to [Chile’s] external image” if the project did not move forward. Shortly thereafter, the Alto Maipo project received a construction permit and the president of the U.S. based company partnering in Alto Maipo, the AES Corporation, has since been appointed as an advisor to U.S. President Barack Obama.

While the Maipo River provides much of Santiago’s fresh water, another regional water source, the glacier-fed White River, is also under threat from mining. In February, a spill from a government-owned mine turned the White River black.

Even before the spill, the Chilean Superintendency for Sanitary Services reported that Santiago’s water supply was contaminated in 14 of Santiago’s 35 municipal districts, with levels of sediment and heavy metals above  those safe for human consumption. Felipe Guevara is the mayor of one of two areas where arsenic, a heavy metal used in mining that can cause brain damage, was double safe levels.

In a debate with an executive of the state-run mining company, CODELCO, aired on CNN Chile, Guevara argued against the expansion of another government-owned open-pit mine north of the city, which he says threatens water quality and 26 glaciers that feed his municipality’s water supply. That expansion has since been put on hold, while the mine continues to operate.

A so-called “Glacier Law” has been slowly advancing in Congress, but former advocates say regulatory measures proposed in the legislation have been severely weakened after lobbying efforts by mining companies and they now oppose the bill.

“We have some very influential industries,” points out Roberto Molina, a public information officer for Chile’s Ministry of the Environment. “We see this with the Glacier Law. Because it will affect mining interests, it will not reach political agreement easily.”

Santiago is still reeling from the water shut off, after millions of residents faced the reality of losing access to clean water at their own kitchen sinks. It remains to be seen if those now speaking out to protect the city’s drinking water can leverage this wake up call to effect any real policy change.