Washington, D.C. residents band together as an administration few voted for takes power 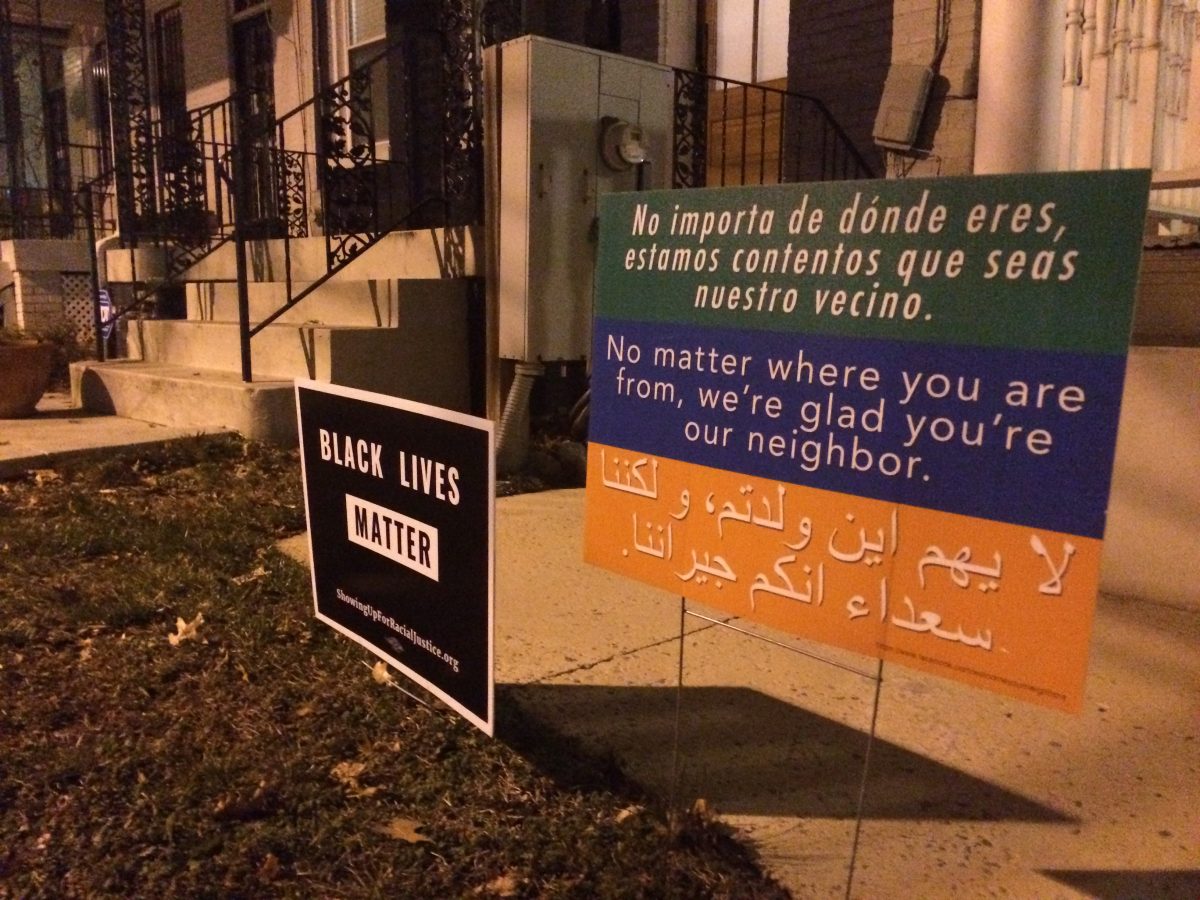 Barely four percent of Washington D.C. voters cast their ballots for Donald Trump, who took the oath of office and became  the 45th president of the United States on Friday. No other Electoral College district rejected him so resoundingly, yet no other city in the nation will feel the impact of his presidency more than the nation’s capital.

This reality is palpable on the neighborhood level, where residents have found ways of pushing back. In the Chevy Chase neighborhood where Mike Pence now lives, hundreds of people held a queer dance party outside the now Vice President’s house Wednesday night.

And Alice Ollstein takes us to DC’s Petworth area, where business owners and residents are bracing themselves for the possible legal and cultural changes a new administration could bring, and finding ways to reach out and support the most vulnerable members of their community.

In a yoga studio in Northwest D.C. packed with slowly breathing bodies, Amy Rizzotto led her students through a series of poses, urging them to leave behind the stress of their jobs and their anxiety about the state of the country.

This Saturday, the floor of Yoga Heights will be covered with a different crowd: protesters from all over the country attending the Women’s March on Washington. It’s the first time the studio has ever hosted anyone overnight, and its first participation in a political event. The shocking results of the presidential election forced many local businesses to reevaluate their role in the community.

“There were a lot of tears on yoga mats. There were some tense conversations. We had a moment where one teacher was confronted by a student very aggressively, because the teacher had said, ‘Let’s focus on being here for the moment, finding some sort of peace, some sort of break.’ And she was confronted after class by a student who said, ‘No, we need to be telling everyone to fight and get mad and stay mad,’” recalls Jess Pierno, the studio’s co-owner. “It was a really tough moment for that teacher and a good example of how intense the emotions were that week. And they’ve definitely stayed strong, people are still upset and scared and nervous.”

She said while she can’t take a political stand for fear of alienating students on the other side of the aisle, she feels offering an inclusive oasis from the nation’s divisive anger is more important than ever.

“D.C. is highly political, all the time, everywhere. So we saw, immediately after the election, a need for a safe place, a refuge away from having to think about it,” Pierno explains.

Hundreds of residents in the same corner of Northwest D.C. have been even more explicit in declaring their community a refuge for people of all backgrounds. Since Trump’s election, lawn signs have been cropping up, declaring: “No matter where you are from, we’re glad you’re our neighbor,” in English, Spanish, and Arabic.

Eddy Ameen, who has lived in D.C. for six years with his partner Julian Forth, said it was important for him to send this message as Trump takes office: “There was a sadness that sort of loomed over the city, in my opinion, and this sign seemed completely appropriate to say that we’re welcoming, that we’re a sanctuary. We can create small pockets of resistance against this incoming administration or regime. The sign should be up at all times but it seemed particularly important to make that announcement right after the election.”

Trump has promised to deport millions of undocumented immigrants and ban Muslims from entering the country. Ameen and Forth say they expect D.C. to protest and resist both these and other changes, but expressed anxiety that the progressive city they love will be radically different in the years to come.

“There are people here who are Trump supporters and will feel more emboldened to be aggressive, whether verbally or physically, to the populations targeted during Trump’s campaign,” Forth says.

Forth hopes the shock of Trump’s election spurs D.C. residents to build deeper connections with one another.

“You actually have to act in groups and be able to know your neighbor and struggle alongside your neighbor and whatever it is that they’re facing,” Forth says. “And finding and creating those networks that can respond to acts of oppression that might be coming down the pipeline.”

The sign in front of their house, Ameen says, is the first step: “Our upstairs neighbor mentioned that he saw a woman stop and read the sign, and she was really touched by it and had tears in her eyes and said thank you for it.”

Just up the street from Ameen and Forth’s home sits a row of bars and restaurants, whose owners are grappling with how to serve and support an anxious local community in the age of Donald Trump.

Several restaurants and an independent bookstore on Upshur street will join dozens of businesses across the city in donating part of their inauguration weekend earnings. The money will go to groups that benefit the populations targeted by Trump’s rhetoric: women, public school kids, refugees, and LGBT youth.

“These bigger-than-D.C. events sweep through, but D.C. prevails,” Katie Presley works booking events at Upshur Street Books, Slim’s Diner, and Petworth Citizen, and says she not only wants them to continue giving to these causes, but she hopes they can be a “beacon” of safety and civility in the years ahead. “I want our spaces to be inclusive, to stay inclusive and loving and open. I want them to be places of discussion and disagreement and thought exercises, and I’ve been really proud that we’ve been able to have programming that is thoughtful and compassionate to anyone who says anything.”

D.C.’s highly-educated, highly-political population voted more decisively against Trump than any of the 50 states. They’ve had a progressive local government that supports legalized marijuana, raising the minimum wage, paid maternity leave, offering sanctuary to undocumented immigrants, sheltering every homeless resident in the winter, and banning discrimination against gay and transgender workers.

When the crowds depart Washington D.C. on Sunday, all of these policies could come under attack. So residents are building new networks, donating to at-risk groups, and loudly declaring their opposition to Trumpism.