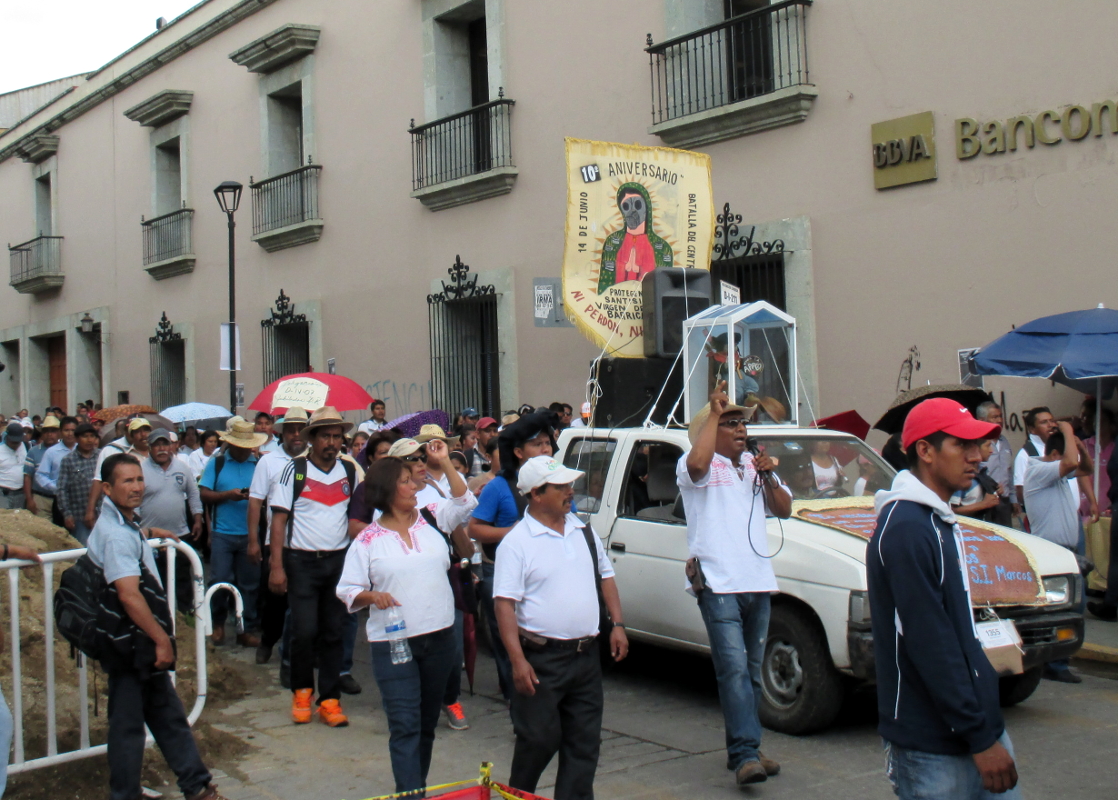 Teachers in Oaxaca march with icons that mix religious imagery with the 2006 uprising; Our Lady of the Barricades and the APPO Baby Jesus. (Photo credit: Shannon Young)

Public school teachers, NGOs and activist organizations in the southern Mexican state of Oaxaca are marking the 10 year anniversary of the start of a popular uprising in 2006. The commemorations come as the state’s teachers union faces one of its largest crises to date and just days after police arrested its top two leaders. Shannon Young has more from Oaxaca City.

Protest chants and the sounds of traditional brass bands permeated a march by several thousand teachers and their supporters to commemorate the 10th anniversary of a popular uprising that continues to loom in the minds of many who live here.

As in 2006, protesting teachers are currently camped out in the state capital’s central plaza as part of a labor dispute. Despite the weeks-long action, there are no negotiations with government officials underway.

But this year’s protests differ from those held a decade ago in that they come in the context of an ongoing struggle over a package of federal labor reforms for education sector workers enacted in 2013. The reforms significantly limit the collective bargaining tools available to teachers unions while tying job security to regularly-administered standardized tests.

Teachers in Mexico’s poorest states – Chiapas, Oaxaca and Guerrero – say the reforms unfairly stack the deck against those already working in marginalized communities. They are embroiled in what increasingly appears to be a high-stakes push against efforts to bust the most combative chapters of Mexico’s dissident teachers union – the National Coordinating Committee of Education Workers, known by its Spanish acronym as the CNTE.

In Oaxaca, the CNTE is using the anniversary of the 2006 uprising to rally its allies in a broader effort to oppose other reforms enacted by President Enrique Peña Nieto’s administration, the most recent of which includes the creation of a so-called Special Economic Zone in the state to entice transnational investment.