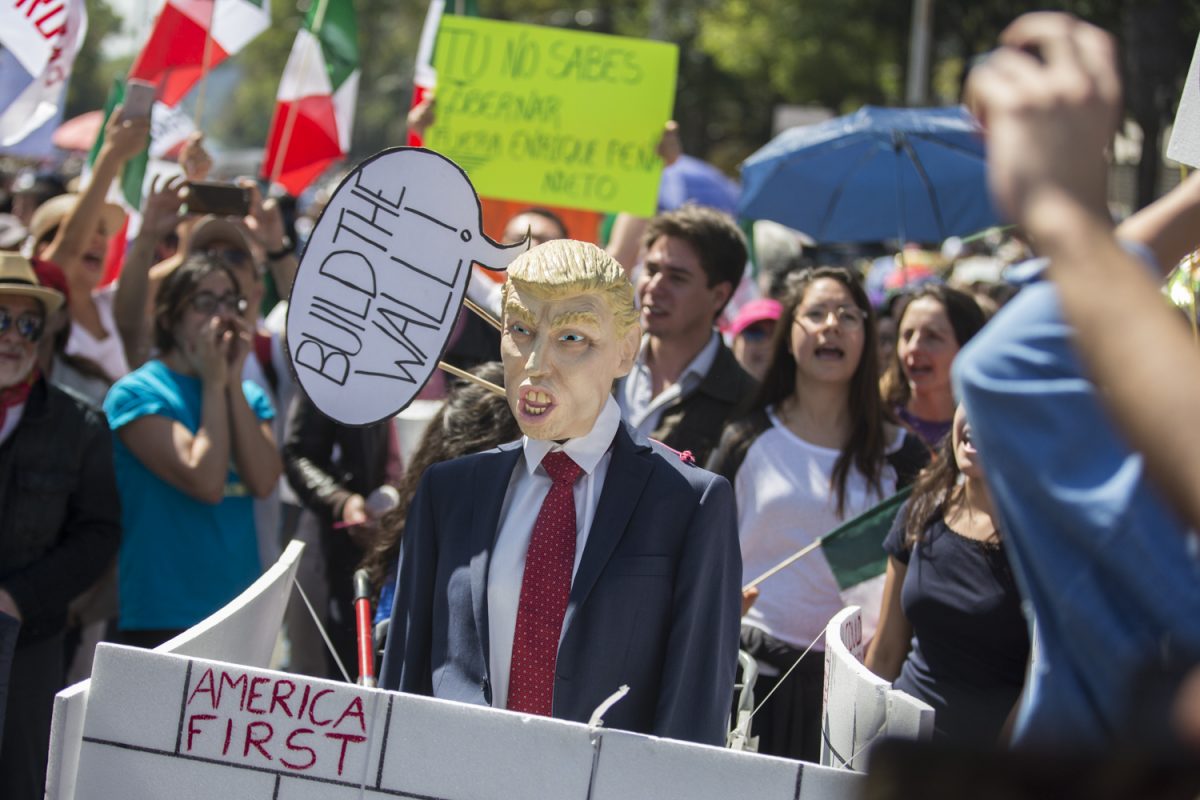 A caricature of Trump at a #VibraMexico march. (Photo credit: Clayton Conn)

U.S. Secretary of State Rex Tillerson and Homeland Security Chief John Kelly arrive in Mexico City this afternoon for two days of meetings with high-level counterparts. The visit comes on the heels of two memos outlining how the Department of Homeland Security plans to carry out President Donald Trump’s executive orders on immigration and border enforcement.

Just how productive the meetings will be remains to be seen, but Mexican officials are already bristling at the memos’ contents, in particular a measure that calls for deporting non-Mexicans to Mexico. And while Donald Trump is widely unpopular south of the border, many Mexicans are also wary of their own government’s ability to handle the diplomatic crisis with their northern neighbor. Clayton Conn has more from the Mexican capital.

Just weeks into the Trump administration, U.S.-Mexico relations are at their lowest point in generations. Trump’s broad deportation plan, the ongoing dispute over an expanded border wall and the unilateral intent to pull out of regional trade agreements have prompted a diplomatic crisis that Mexico’s president, Enrique Peña Nieto, desperately seeks to resolve.

In recent days, Peña Nieto has been driving home a message of national unity to rally support: “We have all responded to this call for national unity. Acting on a common front, acting with great solidarity, in the defense of ourselves, in defense of the values that have identified us and that give us a sense of unity and belonging, and pride of being Mexican. We must act firmly and decisively. We must act with sights set high, with serenity and prudence, but always keeping in mind and clear that, first and foremost, are the interests of the nation.”

But many skeptics of Peña Nieto’s administration question just how the president plans to defend national interests. Mexico’s economy depends both on trade with the United States and on remittances sent back by the millions of Mexican nationals living north of the border. Those fiscal pillars now seem increasingly shaky with Trump vowing to deport millions of undocumented immigrants and ringing a death knell for the North American Free Trade Agreement.

Mexican border cities are bracing to receive unprecedented numbers of deported Mexicans, but investigative journalist and analyst, Jenaro Villamil, says the Mexican government has no concrete plan to handle the crisis.

“There is no clear, forceful policy, no multi-faceted strategy to defend migrants in the United States, taking advantage of the consular network in the first place, because many consular workers have already been fired,” Villamil explains. “They stopped contracting lawyers, the consular network in the United States during the Peña government has focused more on commercial business relations and not on the defense of Mexicans.”

And Villamil argues that it is precisely the jeopardized commercial treaties between the U.S. and Mexico, above migrants’ rights, that has Peña Nieto’s government most concerned.

“The suspension of the free trade agreement is what has the Mexican government nervous because all the expectations and deals of the business sector linked to the Peña Nieto government were designed in function of the continuity of the free trade agreement,” Villamil points out. “The 11 structural reforms of Peña Nieto, especially the energy, telecommunications and financial reforms, were linked to the continuity of the free trade treaty and the approval of the TPP agreement and now that all this has moved, they are without a road map.”

Earlier this month, thousands of Mexicans took to the streets in more than 20 cities to reject Trump’s policies. The demonstrations were organized by more than 80 organizations, and although touted to be non-partisan, they were promoted by some high profile members of Mexico’s business and political class.

Bernardo Sepulveda, a member of the ruling PRI party and Mexico’s top diplomat of the 1980’s, argued that the street demonstrations displayed national unity.

“Well there needs to be a political response, and one political response is what we are seeing right now,” Sepulveda says. “As I said before by the Mexican community as a whole, rejecting Trump’s policies, from the diplomatic point of view, the Mexican government is already taking a series of measures through the president himself, the minister of foreign relations, the minister of trade, all of them are starting negotiations or dialogue with the U.S. authorities.”

Yet, many viewed the protests as a cynical attempt by the ruling party to scrape together political capital. After nearly five years of corruption scandals, persistent levels of violence, economic woes, and a series of highly unpopular structural reforms, Peña Nieto has the lowest approval rating since polling agencies began measuring public opinion of Mexican presidents.

“The PRI is trying to co-opt and pull the water through its own mill, given that the popularity of Peña Nieto is very low, the lowest in history of any other president of this country. And so they want to co-opt. They want to take advantage of the people’s discontent,” says social activist Manuel Ceballos. “They want to do this while calling for national unity. But we say no to Peña Nieto and to political parties. Rather, we stand with civil society. There hasn’t been a political leader in this country, whether it be from the right or left, that has had the ‘claws’ to stop Trump.”

But as Mexico moves closer to its 2018 presidential election, some opposition party leaders are looking to capitalize off of the bilateral rift and show Mexican voters that they do have options. Yet in the short term, many Mexicans want to at least see a plan in place.