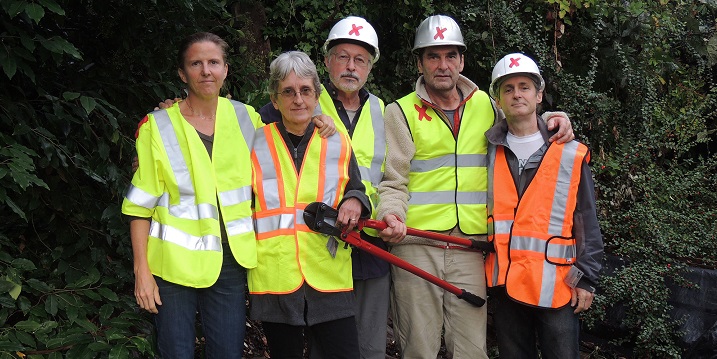 Ken Ward (second from right), one of five climate activists who took part in a four state coordinated pipeline shut-down. A Skagit County, Washington jury refused to convict Ward on all charges related to the act of civil disobedience. (Photo used by permission via Shut It Down)

In a surprise victory, a Washington state jury has refused to convict Ken Ward, the first of five “valve turners” who shut off tar sands pipelines from Canada to Washington in October of last year. Ken Ward, who turned off an emergency block valve on Kinder Morgan’s Trans-Mountain Pipeline, was charged with two felony counts. After more than five hours of deliberation, Ward’s three day trial ended in a hung jury, with at least one juror refusing to convict. Martha Baskin has the story.

They turned off valves to tar sands pipelines in four states in an action that’s been called the “biggest coordinated move on U.S. energy infrastructure ever undertaken by environmental protesters.”

They broadcast the action via live stream and informed pipeline companies what they were about to do.

Jay O’Hara made the call on behalf of Ken Ward, who entered a TransMountain block valve site near Anacortes, Washington, a coastal refinery town 80 miles north of Seattle: “Climate activists are preparing to shut the block valve. I’m calling to ask that you shut down the Express pipeline, the Keystone pipeline, in approximately ten minutes.”

Ward is the first to face a jury in a closely watched historic trial – the first in a series stemming from pipeline protests last October. Charged with burglary in the second degree and criminal sabotage, he faced a 20 year sentence if convicted for turning off Kinder Morgan’s Trans-Mountain Pipeline. But in a fast-moving trial where the judge denied a “climate necessity defense,” the jury refused to convict.

The climate necessity defense is an argument made by a criminal defendant to justify action taken on behalf of the planet. After more than five hours of deliberation, 12 jurors were unable to reach a unanimous verdict. The result was a hung jury. During a telephone interview before the trial, Ward said no matter what, further action is required.

“Shutting these pipelines is what we need to be doing every year for several decades to have any shot at avoiding cataclysmic climate change,” says Ward. “So the fact that we shut it down for one day is satisfying, that that’s what we could accomplish as individuals, but in terms of what needs to be happening, it’s nothing – it’s a pin prick.”

Ward has worked on environmental and climate issues for decades. He began direct action three years ago when he and O’Hara used a small lobster boat to block 40,000 tons of coal en route to a Massachusetts power plant. The case was dismissed after the prosecutor concluded that climate change is real.

Since then Ward has continued to focus on sea level rise, following the work of Dr. James Hansen which shows it’s “rapid enough to threaten the conditions that make civilization possible.”

It was an argument Ward’s attorney used in the courtroom despite repeated objections from the prosecution. To prove its case of burglary and sabotage, the prosecution displayed broken locks and wire cutters Ward used when he shut down the pipeline.

In contrast, the defense displayed maps and diagrams showing melting ice caps and sea level rise. One showed a rise in sea level of five feet in the coastal county where the trial took place.

“Which is what the outgoing state department and other scientists say is in the realm of what we’re facing here,” Ward explains. “It’s about a quarter of the counties under water.”

Ward and O’Hara are among the founders of the Climate Disobedience Center, an organization committed to act publicly and with determination to, in O’Hara’s words, “undermine the fossil fuel basis of industrial civilization.”

While the jury deliberated, O’Hara said direct action isn’t a panacea in a movement that requires lobbying and legislative outcomes, but is a critical ingredient: “A keystone species in the ecology of a healthy and powerful and growing movement.”

Civil disobedience against the fossil fuel industry, he says, clarifies the magnitude and scale and urgency of the problem and “It creates a True North sort of situation, to see clearly the stakes and see clearly the lengths that we need to go to.”

One of the four other valve turners during the October action, Michael Foster, was in the courtroom watching Ward’s trial. Foster shut down the Keystone One Pipeline in North Dakota.But now with the Trump administration, he’s unsure what will happen.

Foster grew up near Houston and knows pipelines and refineries.

“I grew up inside and around them and I know that we have to shut them all down as soon as possible,” Foster says.

It’s not about some super computer model that says what’s going to happen in 2100 he says, but “It’s about what happens in 2017 to stop the burning of our children’s only home.”

The prosecution in Ward’s case is expected to appeal the jury’s decision to not convict. The next valve-turner trial is expected sometime in the spring.