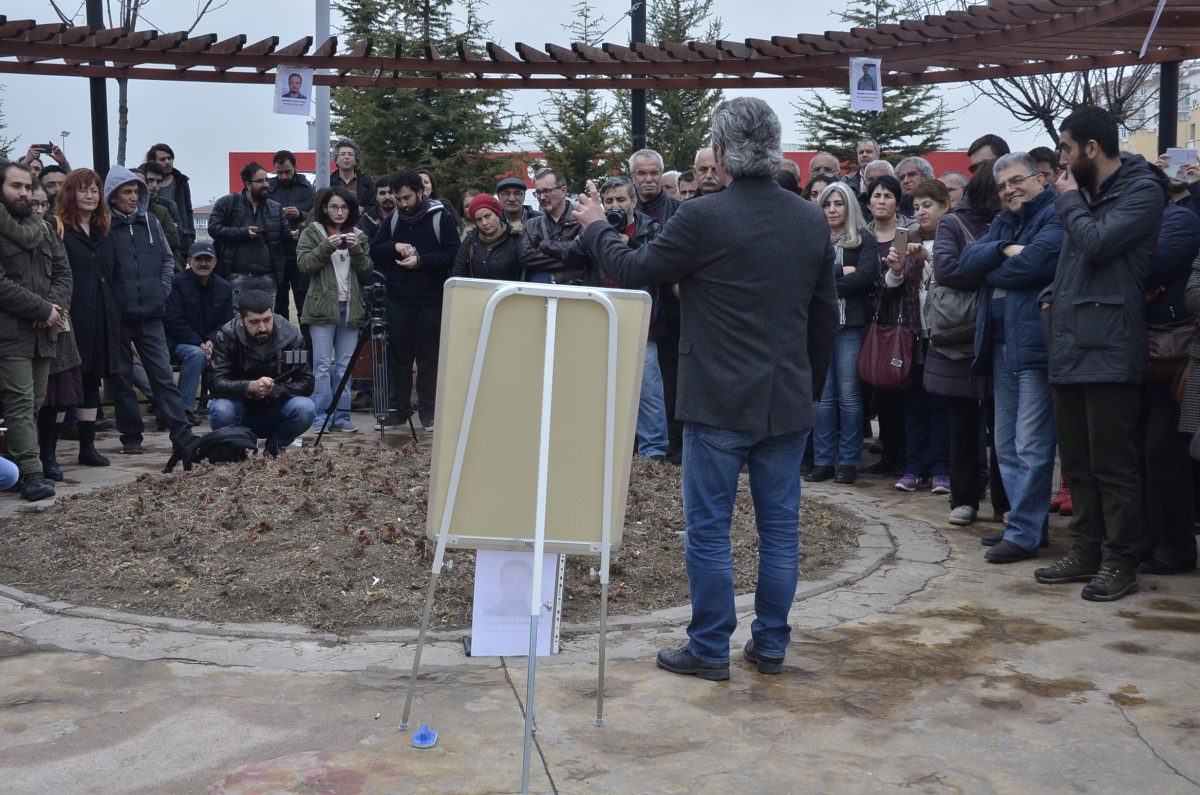 Street Academy, an event organized by fired academics who teach in public spaces as a form of resistance. (Photo credit: Lorena Rios)

U.S. Secretary of State Rex Tillerson will visit Turkey Thursday. Tillerson is the most senior U.S. official to visit Turkey since the change of administrations. Relations between the two countries have been complicated in recent years, exacerbated by the civil war in neighboring Syria and Ankara’s crackdowns on civil society following a failed coup attempt last summer.

Hundreds of academics have been fired from universities across Turkey by a presidential decree, along with 4,500 public servants. It’s the latest of a series of purges since the unsuccessful military overthrow attempt of July 15, 2016. In all, more than 125,000 people have been fired and 40,000 arrested in professions like the police, army and judiciary. Lorena Rios reports that some fired professors are continuing to teach in the streets.

A group of university professors, teachers and civil servants gather in the Educators’ Union in Ankara to discuss their future plans after losing their jobs in ongoing purges of public sector workers.

After last year’s failed coup, the administration of Turkish President Recep Tayyip Erdogan cracked down on opposition groups and critics. Erdogan has sweeping power under an ongoing state of emergency to dictate policy by decree, without the approval of parliament. And Turkey’s broad anti-terror laws are implemented at the expense of civil liberties, and in the case of professors, academic freedom.

“They are trying to link the dismissals with some terrorist activities,” explains Nur Betul Celik, a longtime professor at Ankara University who says the crackdown started before the coup attempt.

In January of last year, more than a thousand academics from 90 universities signed a petition calling for peace in south-eastern Turkey where confrontations between armed forces and Kurdish militants have displaced about 500,000 people.

The government immediately raided the homes of some of the professors. And of the recent wave of mass firings, 115 of the academics signed the petition.

“Since then, all of us were subjected to different kinds of mobbing,” Celik says. “Our projects would not be approved; we were prevented to go abroad for the conferences and seminars.”

Academics are not the only ones targeted for openly criticizing the government. Writers, journalists and anyone who even tweets anything that the state might consider threatening can face is prosecution.

The majority of dismissed academics – including Nur Betul Celik – hail from Ankara University.

After the July 15 coup attempt, elections for rectors in Turkey’s 181 universities were suspended, the president has the power to appoint university rectors, and deans can initiate politicized investigations of its academics. Faculty and administrators at higher education institutions are under pressure to align themselves with the government’s political ideology.

Didem Kalafat, a fourth year student of Sociology in Ankara University is meeting her friends on a Sunday morning in a park on the outskirts of the city.

They’re here for what is known as Street Academy, an event organized by fired academics who teach in public spaces as a form of resistance. Her former professor, fired in the most recent purge, is giving a lecture on class struggle. Five academics from her department were dismissed and two of her classes have been put on hold.

“The professors that remain in the department took over the classes taught by the dismissed academics, but they are not as good,” Kalafat laments. “We don’t want a new professor appointed by the government or by the Council of Higher Education.”

Political Science professor Mehmet Mutlu is one of the organizers of the Street Academy. He also signed the petition calling for peace in the southeast but the government has not yet targeted academics from his institution.

“They are under the pressure of the government and the high council of universities. In my university – the Middle East Technical University has a long history of dissidents,” Mutlu points out. “It is known as a leftist university but that doesn’t mean that we are not under risk. We are just waiting to be dismissed.”

After the failed coup, Turkey’s Higher Education Board demanded the resignation of 1,557 deans on duty at all private and state universities throughout the country. Some of them have been reinstated, but President Erdogan’s direct appointment of university rectors, especially at the prestigious state-run Bosphorus University in Istanbul, has stirred controversy and sparked anger from its students.

“I am here to underline that this is not just a problem of the dismissed academics, but also it is a problem for the still working academics, because we are trying to teach under the pressure of the same government,” says Mutlu.

In Istanbul, Levent Dolek, a professor at Istanbul University’s Economics Department, is also organizing with the educator’s union. He did not sign the petition calling for peace, but he considers himself a target for his political leanings.

“The worst thing is we did not face any criminal charge. Our right of defense is totally usurped. The decree claims that we are connecting to some terrorist groups, but they don’t explain which group and how we are related,” explains Dolek. “Nobody says – pro-Kurdish or leftist groups, no explanations. And they don’t say what we have done that can be described as terrorism.”

Dolek is urging academics and civil servants who have been affected by the purges to organize through the union. Academics like Dolek are staging demonstrations and protests in front of their old university gates with the support of students. They risk violent police dispersals and detention, but at this point, they have little left to lose.

“They may fire us, but they couldn’t silence us,” says Dolek. “So, I can say the future will be better and we will win.”